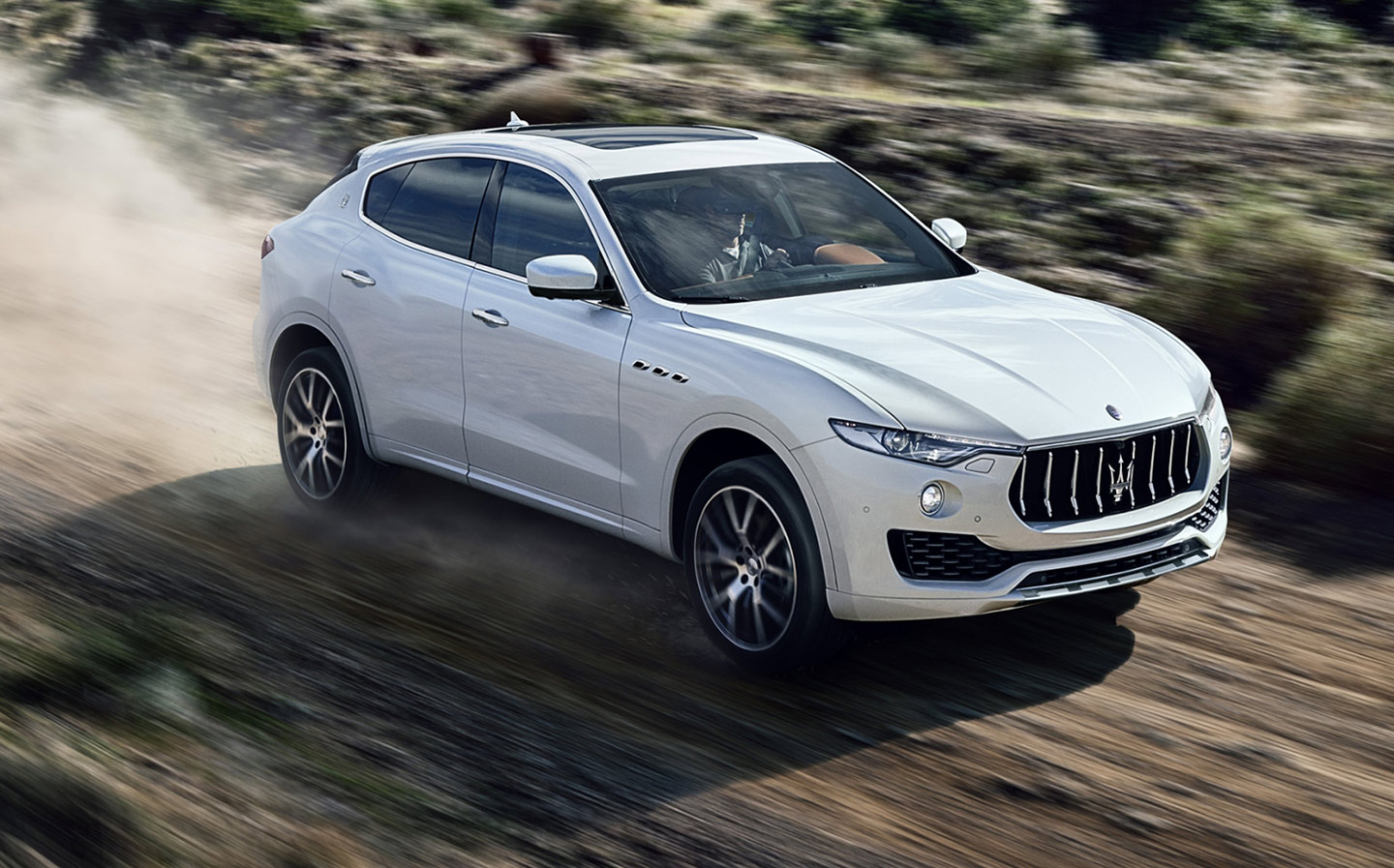 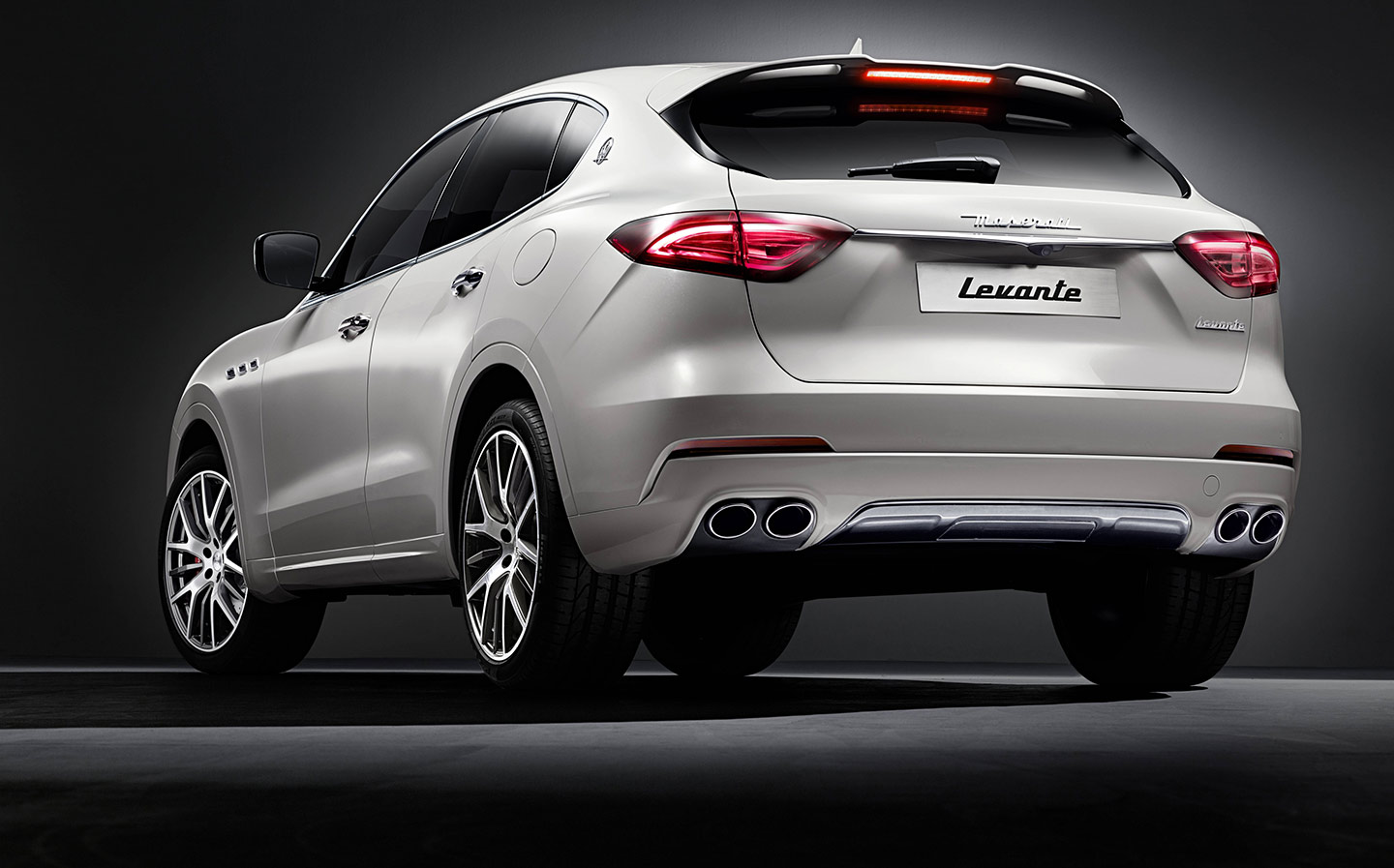 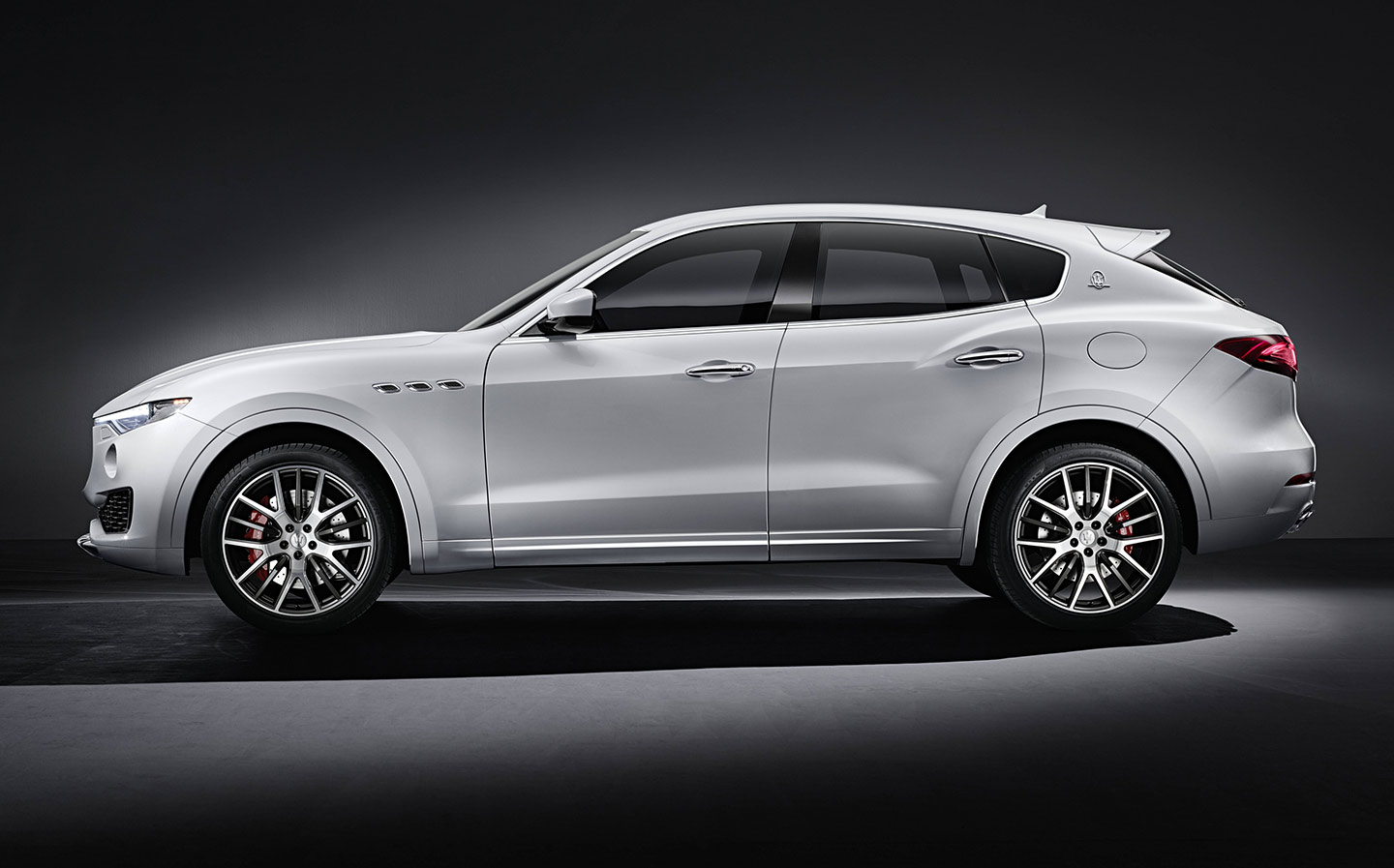 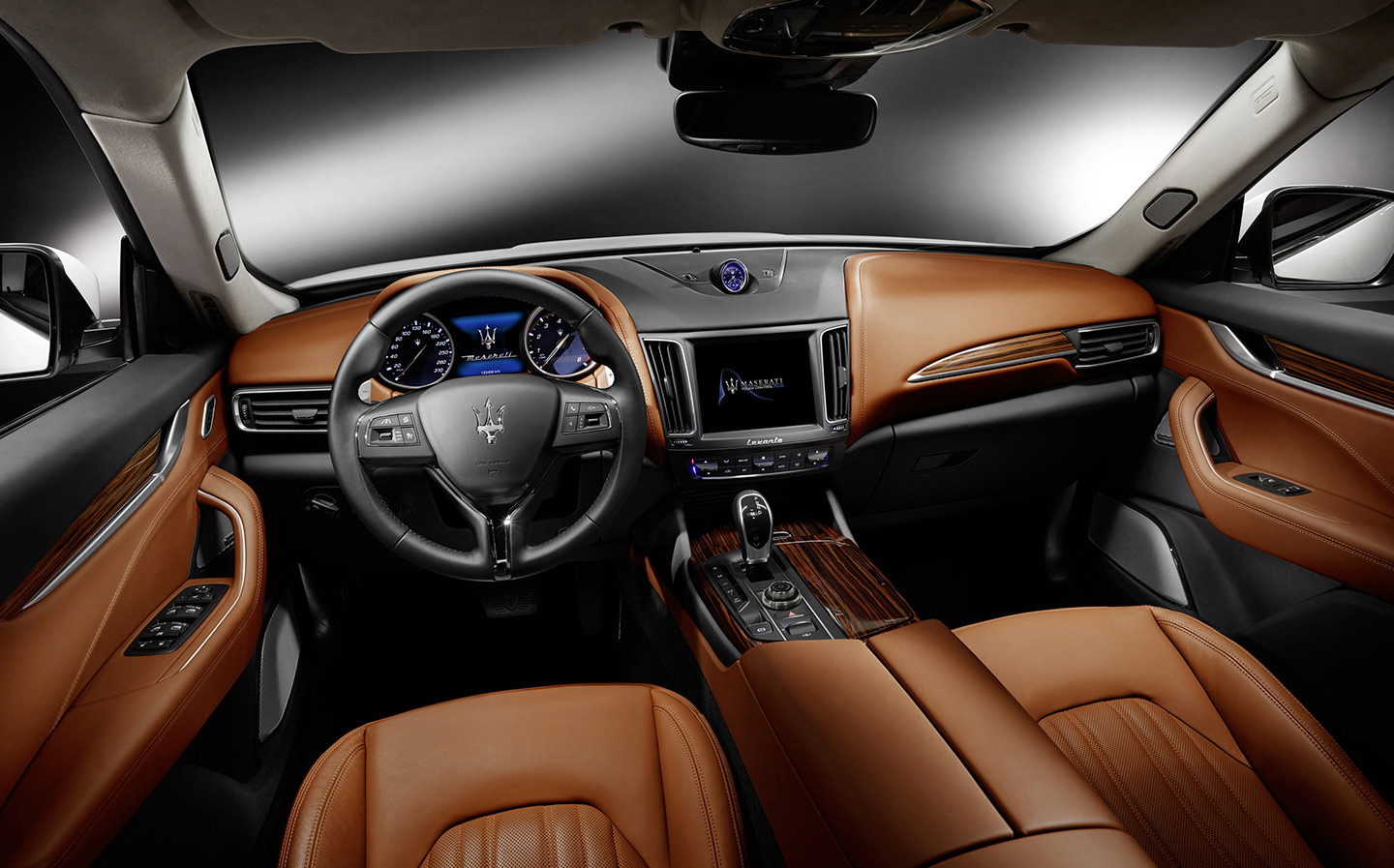 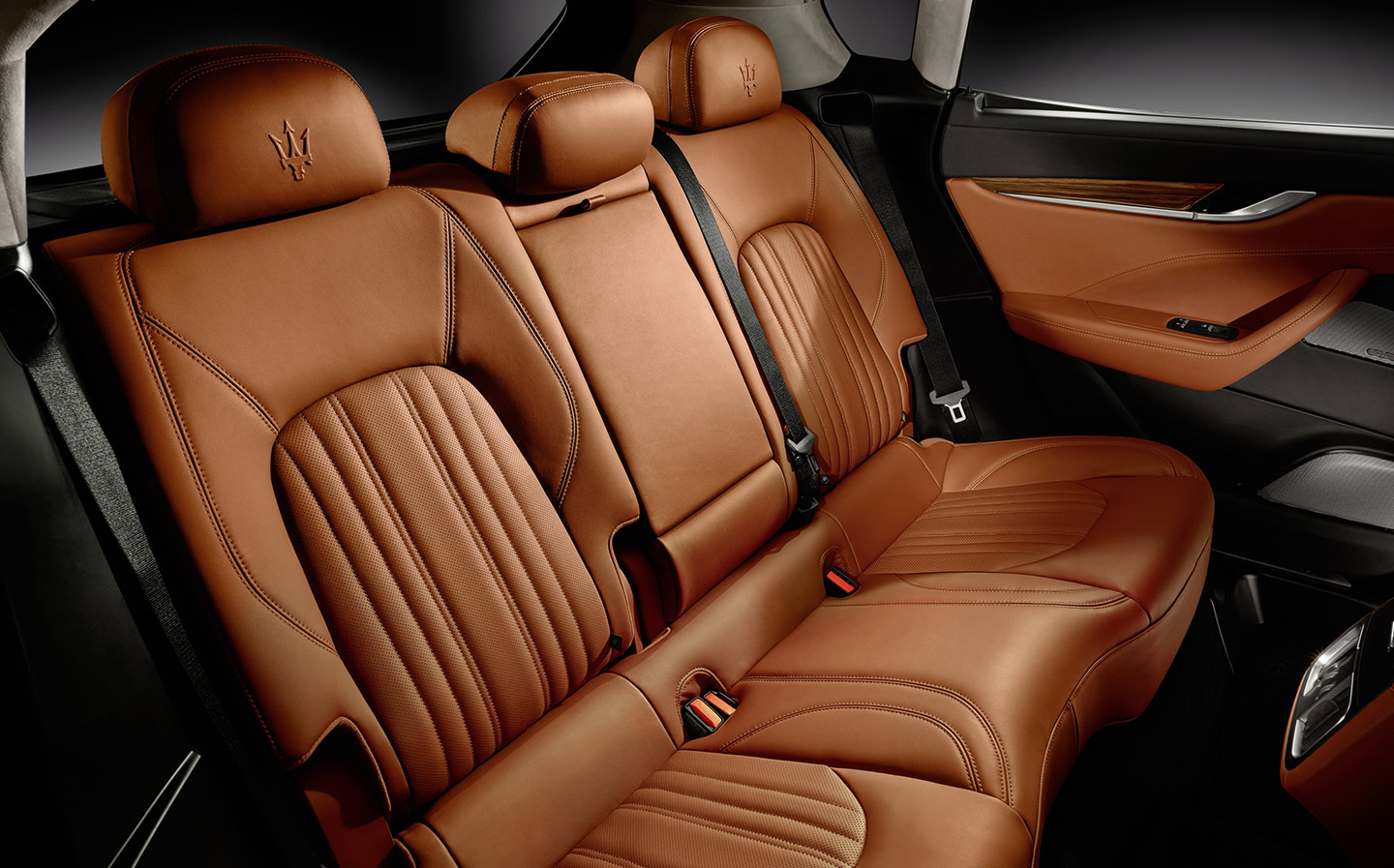 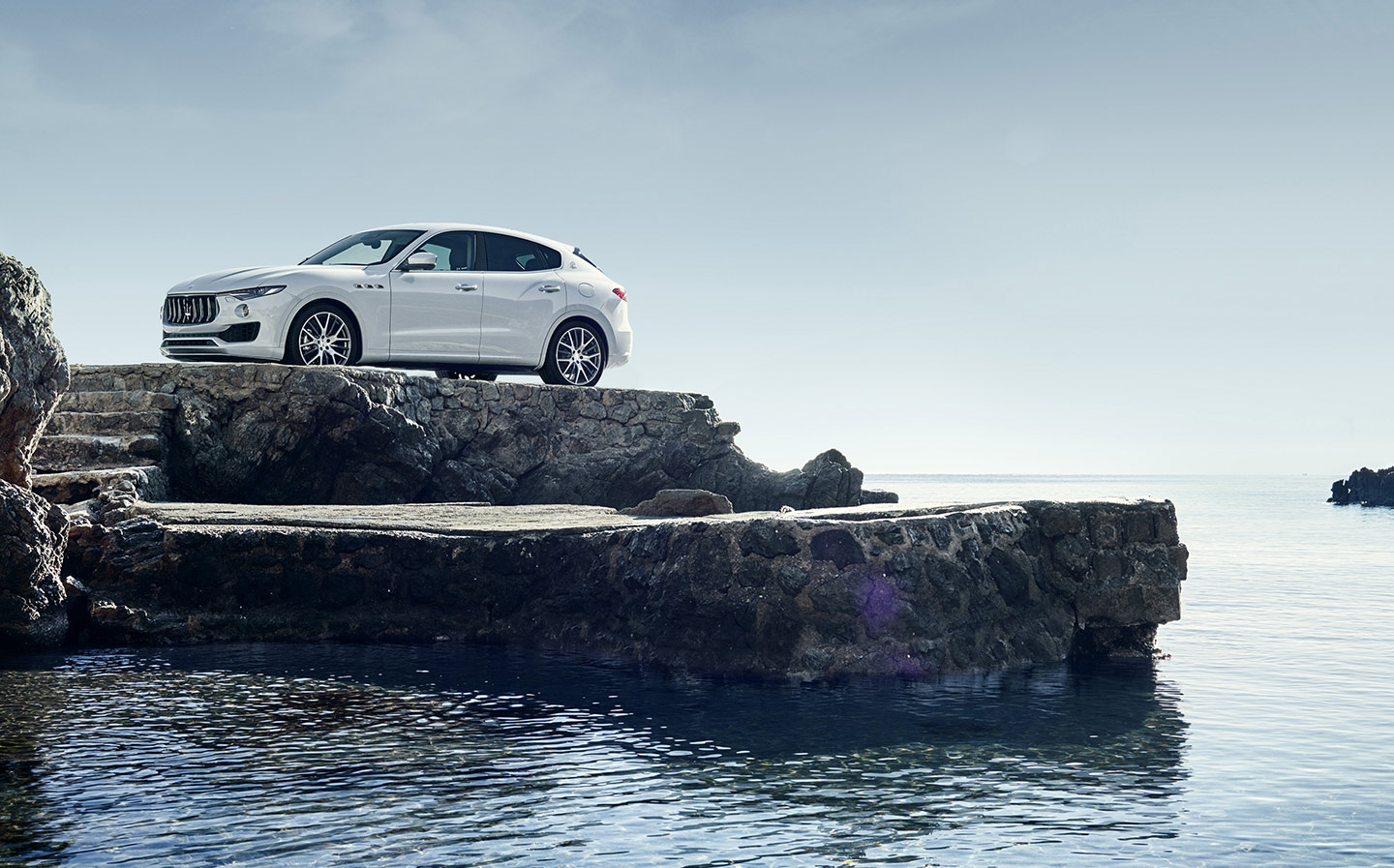 Share Article
Basically a taxi with a crap clock
At a glance
Pros
Umm.
Err.
Hmm.
Cons
Underpowered diesel engine
Big on the outside but not on the inside
Parts raided from old Chryslers
Specifications
Cars > Maserati > Levante

I’M SURE you will have noticed, people have started wearing trousers that are deliberately torn across both knees. Does this mean that the Savile Row tailor Gieves & Hawkes has jumped on the bandwagon and is selling suits with raggedy holes in the legs?

No. It won’t have even crossed the tailors’ minds. They have spent hundreds of years developing and nurturing their reputation and they know it would be unwise to throw it all away in the pursuit of a fast buck.

People should stick to what they know. You don’t find Mary Berry making programmes about motorcycle maintenance or Vin Diesel playing Hamlet. But in the world of car manufacturing, things are different.

There’s a fad at the moment for SUVs, and, rather than sit around saying, “That’s not what we do”, Aston Martin, Porsche, Bentley, Jaguar, Alfa Romeo and Lamborghini have all taken leave of their senses and thought, “We’ll have some of that, thank you very much.”

Lamborghini, I admit, has dabbled in this area before, with the fearsome LM002. Powered by the V12 from a Countach, it was a gigantic and hilarious monster. I tried to drive one once and it didn’t go well because the gearbox was jammed in second. I sat in the back seat pushing the lever with my legs, while a burly chap sat on the dash using all his strength to pull it. Eventually, it gave in with an almighty crack and the burly man’s arse shot through the windscreen. I laughed about that for six years.

I suspect the LM002 wasn’t really built as a serious attempt to move in on the pre-Hummer military, and was just a gift from the network of Italian power to Colonel Gadaffi, who, it’s said, loved it.

Lamborghini can probably get away with an SUV today. Because we know it started out as a tractor maker and all its cars have always had a certain He-Man appeal. They’re built for doing 9mph in Knightsbridge, not 90 round the Nürburgring.

But Aston? Jaguar? Alfa Romeo? Bentley? Companies such as these making SUVs really is as odd as McDonald’s launching a watercress and kale smoothie. And that’s before we get to Maserati.

Maserati made its name in the 1950s on the grand prix circuit, and then nailed its colours to the mast in the 1960s with an impossibly beautiful succession of exotic cars that were named after the world’s winds. This is a company, then, that has no place making a jumped-up Land Rover. But that’s exactly what it has done.

“[Maserati] called a meeting and very obviously said, ‘Right. Let’s do this for as little as possible.'”

The car in question is called the Levante, which sounds as though it ought to be some kind of soap for the sort of man who enjoys personal grooming.

Now. Had Maserati called a meeting to decide what this car should be like and decided it would go all-out to emphasise the “S” in SUV, then it might have stood a chance. Alternatively, it could have decided to make it the last word in luxury, a car that would make the Bentley Bentayga look like a toddler’s pushchair. And that might have worked too.

But instead it called a meeting and very obviously said, “Right. Let’s do this for as little as possible.”

I’ll start with its clock. For as long as I can remember, Maseratis have been fitted with an elegant, oval timepiece, the sort of thing you would expect to see David Beckham advertising at Heathrow’s terminal 5. Even when Maserati was basically bankrupt and making the Biturbo, it never stooped so low as to go down the Casio digital route.

In the Levante, however, you get an ordinary circular plastic clock mounted in a plastic oval. You look at it and think, “Well, if they’ve cut corners there, where else have the accountants been making merry with the sandpaper?”

An answer becomes obvious when you fire up the engine. In time there will be a V6 that runs on petrol, but your only option in the UK now is a diesel. Which wouldn’t be so bad if it were a modern diesel fitted with all the latest whizzbangs and gizmos to make it quiet and refined and torquey. But instead Maserati has fitted a single-turbo engine that happened to be available. And it’s just not good enough in any area. It’s not particularly quiet or powerful or economical or clean. It’s just a tool that does a job, and in a 50-grand Maserati, that’s nowhere near good enough.

Then you move off, and immediately the whole car has hysterics. It’s so big and so wide, its impact warning sensors are constantly convinced you’re going to have a crash. Even when you are in slow-moving traffic on the A4 coming into London, it’s screeching and squealing about the proximity of the barrier to your right and the bus to your left.

When you’re parking, it goes berserk, insisting you stop reversing when there’s enough space between you and the car behind to build a £7m house.

There’s another problem with the Levante’s size. It doesn’t translate into actual interior space. The boot isn’t that big, the back isn’t really big enough for three adults and in the front you feel hemmed in and claustrophobic. And deaf, because it’s just seen a tree that you are definitely going to hit.

You may imagine, of course, that all these quibbles melt away when you leave the city and find yourself a nice piece of open road.

Nope. Like all purists, I was delighted when I heard the Levante wouldn’t just be a leather-lined Jeep — Chrysler, which makes Jeeps, and Maserati both belong to Fiat — but instead would be a Ghibli on air-sprung stilts. But this isn’t much better, really, because the Ghibli is actually based on the old Chrysler 300C. Which in turn was based on the Mercedes E-class taxi from about 30 years ago. So the Levante is basically a taxi with a crap clock.

You see evidence of the parts-bin mentality all over the interior. Yes, there’s a lot of leather, and that’s nice, but many of the buttons are lifted straight from the old Yank tank.

There are many, many people of my age who would dearly love to own a Maserati. Lying in bed at night, knowing that you had one in your garage, would make you all warm and gooey. But not the Levante. It doesn’t look or feel or drive like the image you have in your head.

And, to make things worse, it doesn’t even feel or look or drive as well as its rivals. To put it simply, BMW, Mercedes, Audi and Land Rover can offer you something better. Much better.

I’m willing to bet that the new Alfa Romeo Stelvio is better as well. Even though that’s another car from the Fiat stable that shouldn’t have been made in the first place.