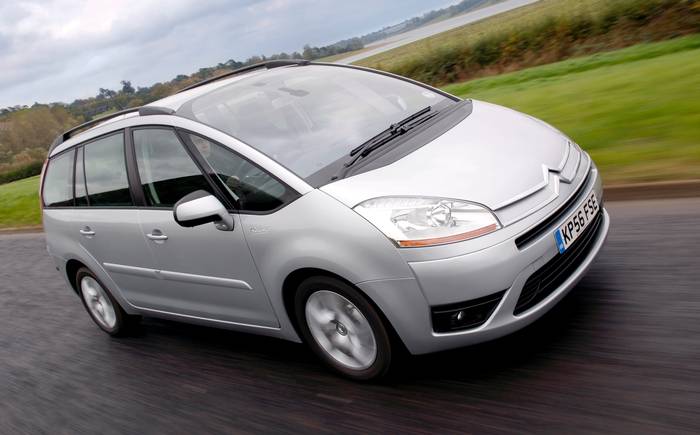 What is the Citroën C4 Grand Picasso Mk 1?

People carriers are regarded as some of the least glamorous cars on the market, their big and boxy silhouettes crushing any romantic sentiment attached to travel. Even so, the car companies making these workhorses often strive to give them the pleasing sheen of advanced industrial design, and so it is with Citroën’s Grand Picasso, whose wedge of a nose has something of the high-speed train about it. And the styling gets even bolder inside this seven-seater.

Search for and buy a used C4 Grand Picasso on driving.co.uk

Grand Picassos start at £16,162 and rise to £23,650, but Citroën’s dealers are addicted to discounting, which could save you thousands — something to remember when comparing it with Ford’s S-Max, the Peugeot 5008 and Seat’s Alhambra — although residual values tend to be weak as a consequence.

When you need to haul a big load, the lusty pulling power of a diesel makes sense, and Citroën offers a pair: a 1.6 and a 2-litre. In spite of the Grand Picasso’s size you need only the 1.6, whose smooth thrust is enough to make the 2-litre unnecessary. This Citroën is most impressive at speed— just like a high-speed train — the raised seating position, the composure of its ride and its refinement making long journeys effortless for all.

At lower speeds and on bumpy roads the ride can turn lumpy, especially if you opt for the semi-automatic EGS transmission, whose gearchanges trip the car up a little. A manual Grand Picasso makes the better buy. The glassy cabin and light steering make this sizable car easier to park than it looks — though the optional parking sensors are advisable — but that same light steering limits the enjoyment for keen drivers. And if you think that expecting driving enjoyment in an MPV is a bit like hoping to find joy in the washing-up, you need to try Ford’s S-Max. 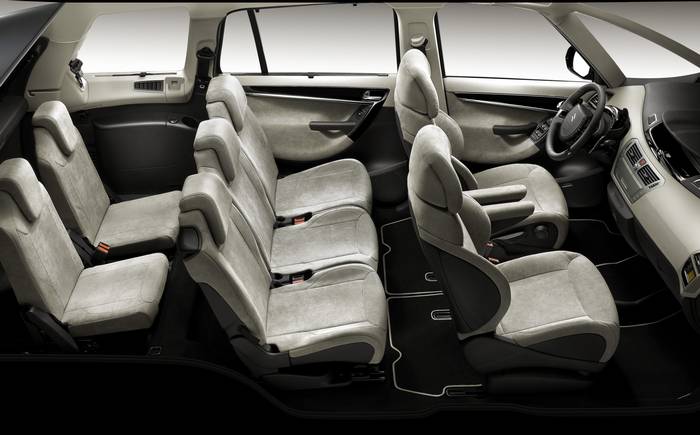 Citroën interiors often used to be shoddily made altars to the craftsmen of cheap and shiny plastic, but a soft-touch, elegantly constructed dashboard, attractively upholstered seats and neat fixtures and fittings make this MPV a pleasure to climb into, especially as it’s very airy — the more so if you opt for the glass roof. Forward visibility is excellent and the minor control layout, which groups most switches in and around the steering wheel, looks pretty space age, although they’re a bit fiddly to use. Room in the middle row is good, though better in the S-Max and Alhambra, and the rearmost pair of seats will house a couple of teenagers. Unusually, the Grand Picasso still has a useful boot when all seven seats are up; when they’re all folded into the floor, the load bay is vast, and completely flat too.

If you’re a confirmed petrol engine fan your choices are between 1.6, 1.8 or 2-litre units, but you’re better off sticking with a diesel; they’ve got the low-down muscle that’s ideal for an MPV. There are 1.6 or 2-litre editions, the smaller one offering ample pull for everyday driving. However, this needs TLC every 12,000 miles, while the larger unit can go for 20,000 miles between services. So if you’re a high-mileage driver you might be better off with the 2.0 HDi – but this came with an auto box only until the C4 Picasso was facelifted in 2010.

The Grand Picasso  isn’t necessarily more costly than its smaller sibling if you shop around, but it is a lot more spacious as it’ll stow 1951 litres with all the seats folded flat. Admittedly there are even more capacious MPVs out there – but few offer the panache of the Citroën.

Reliability hasn’t always been a Citroën strong point, but the C4 Picasso has proved to be decently durable so far. Air-con systems can be temperamental and the dash illumination can fail, while the EGS transmission hasn’t proved bullet-proof – but problems aren’t a foregone conclusion in any of these areas. Radio reception tends to be poor though, while tyre wear can be swift, so see how much tread is left at each corner.