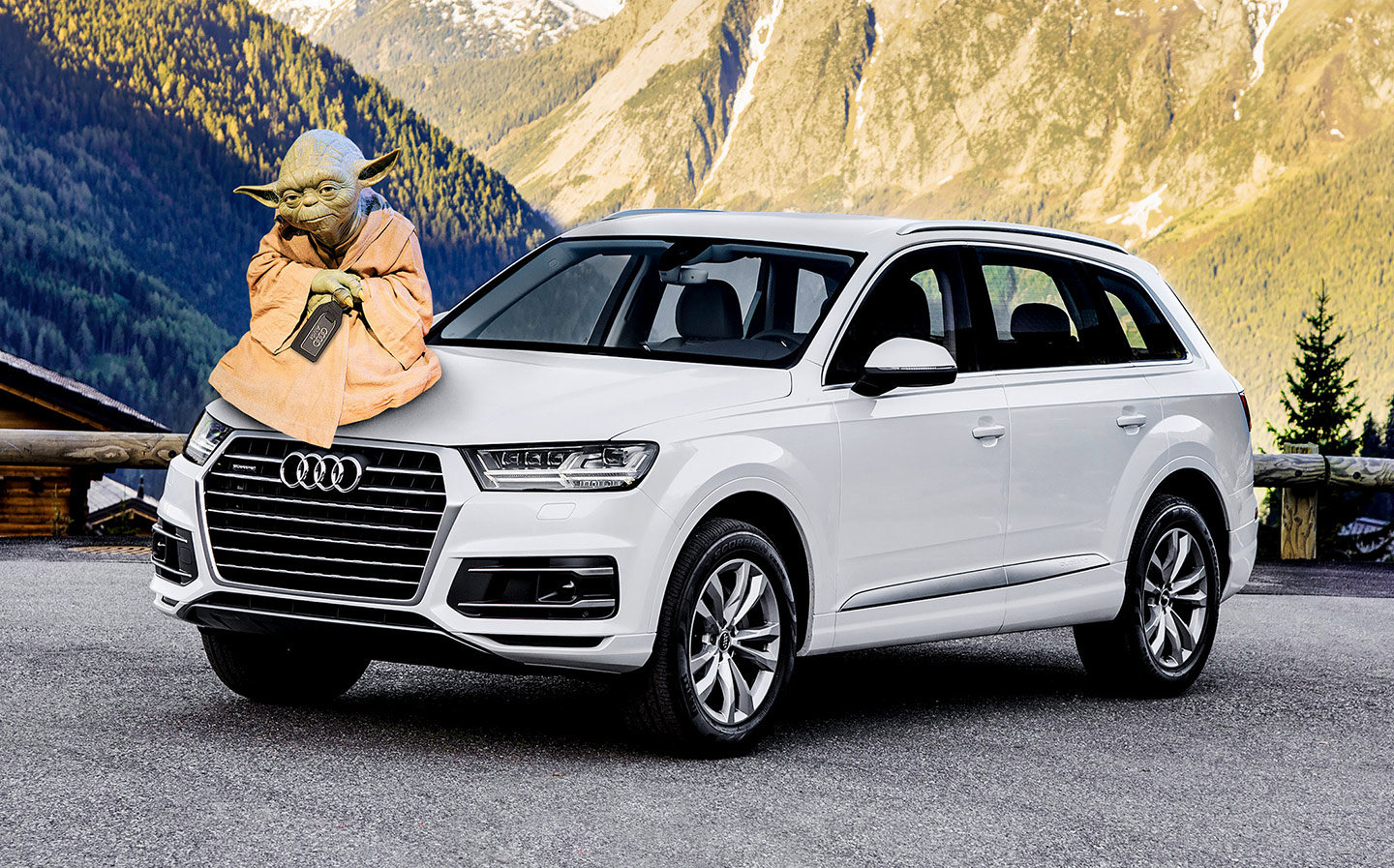 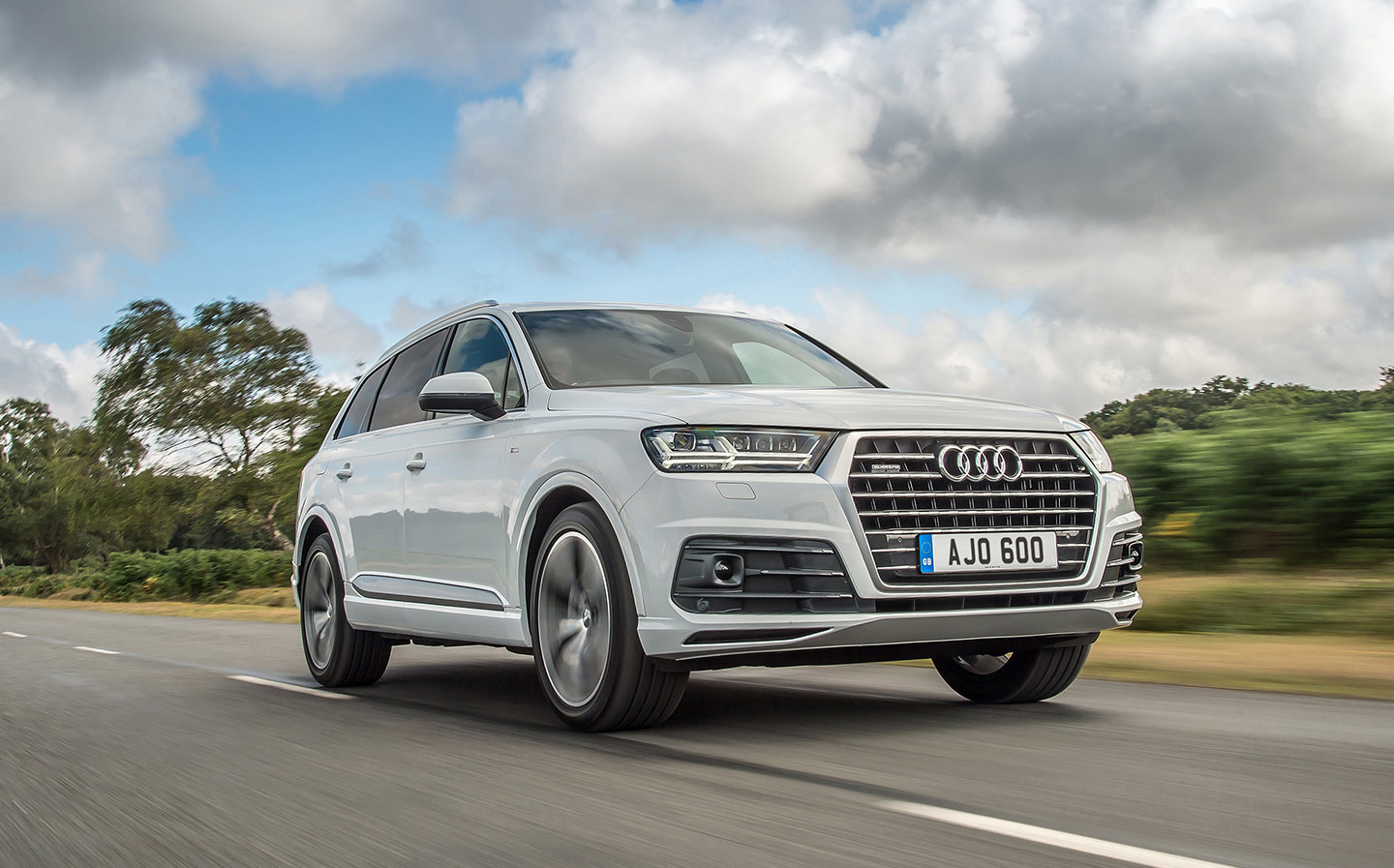 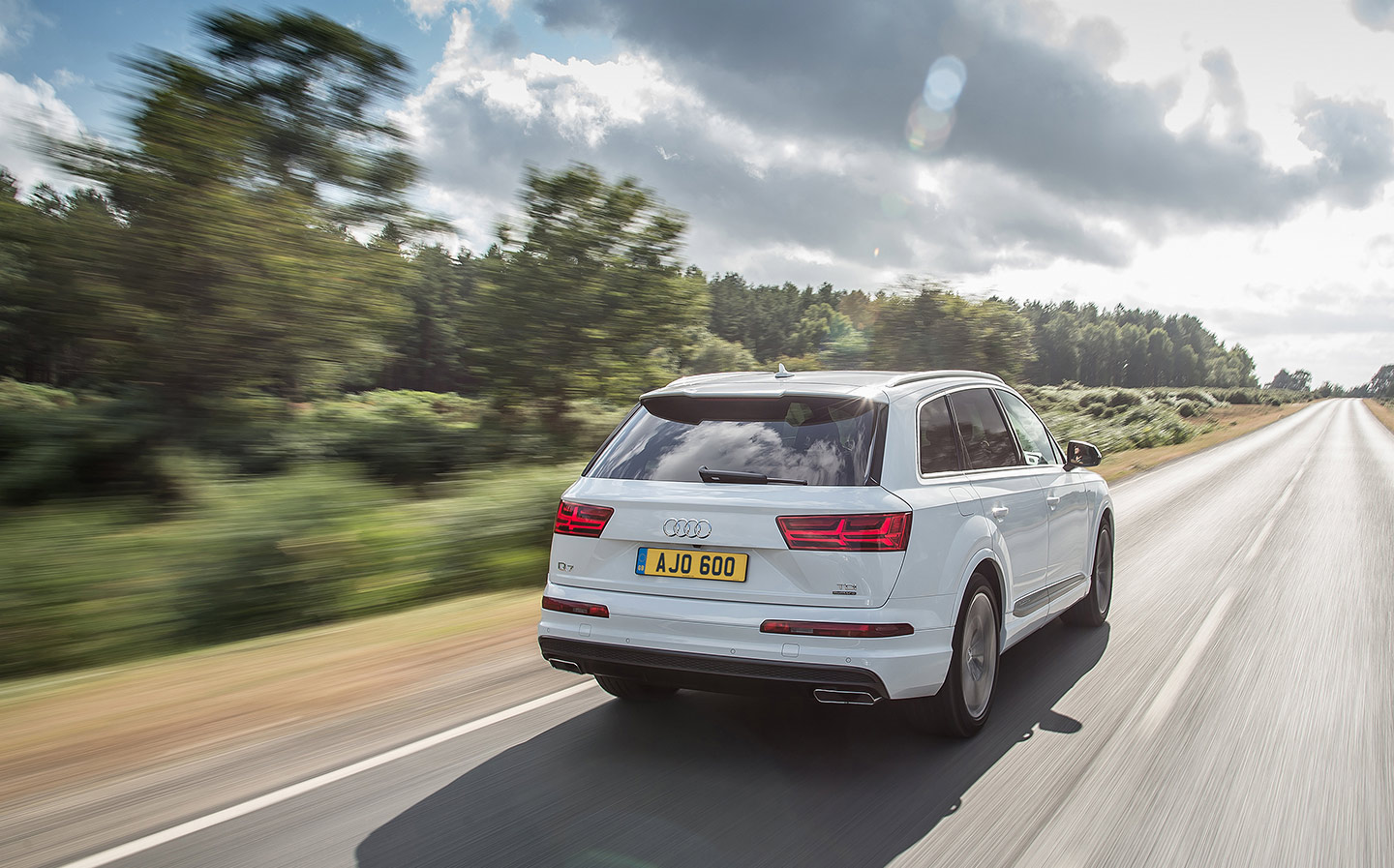 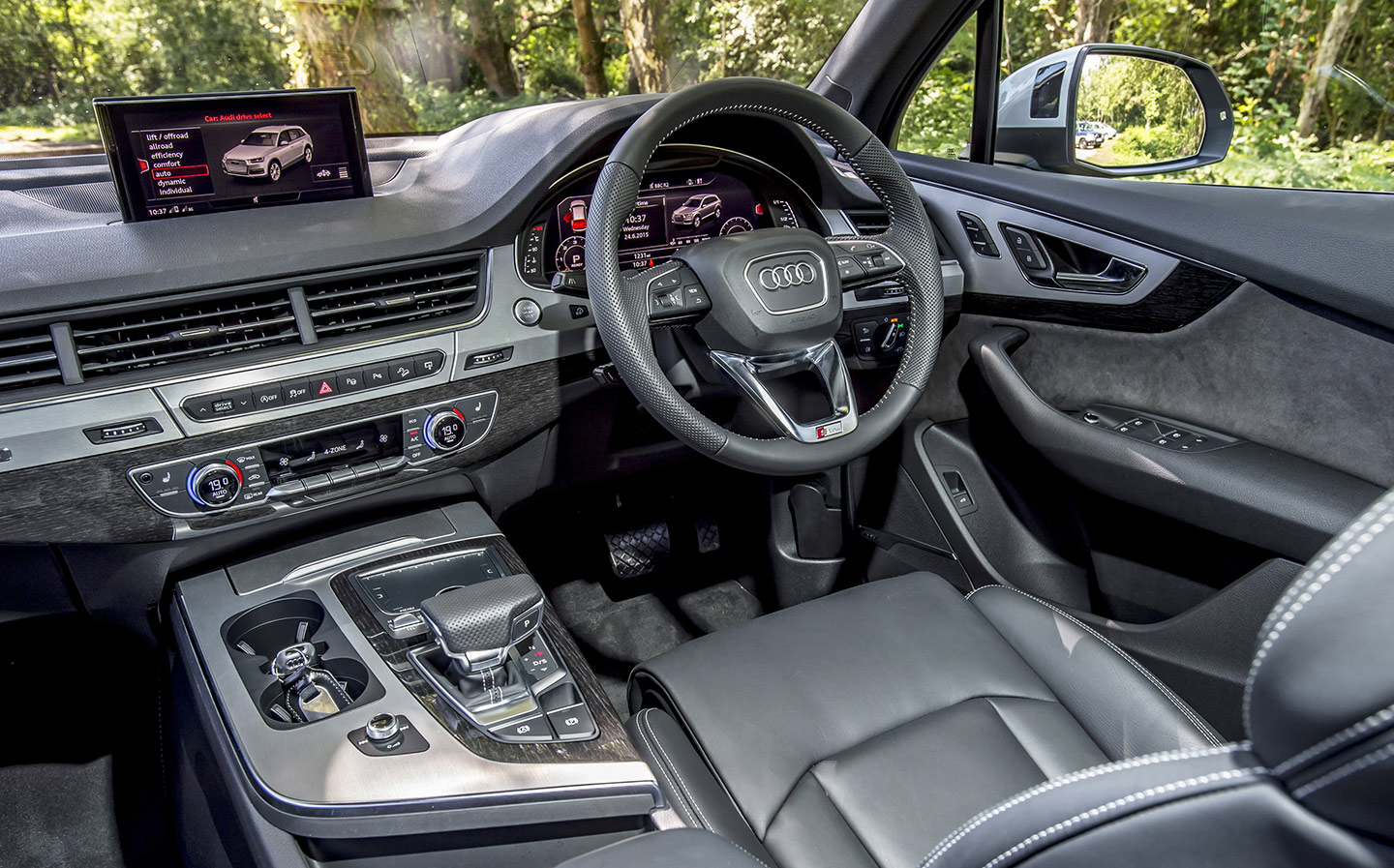 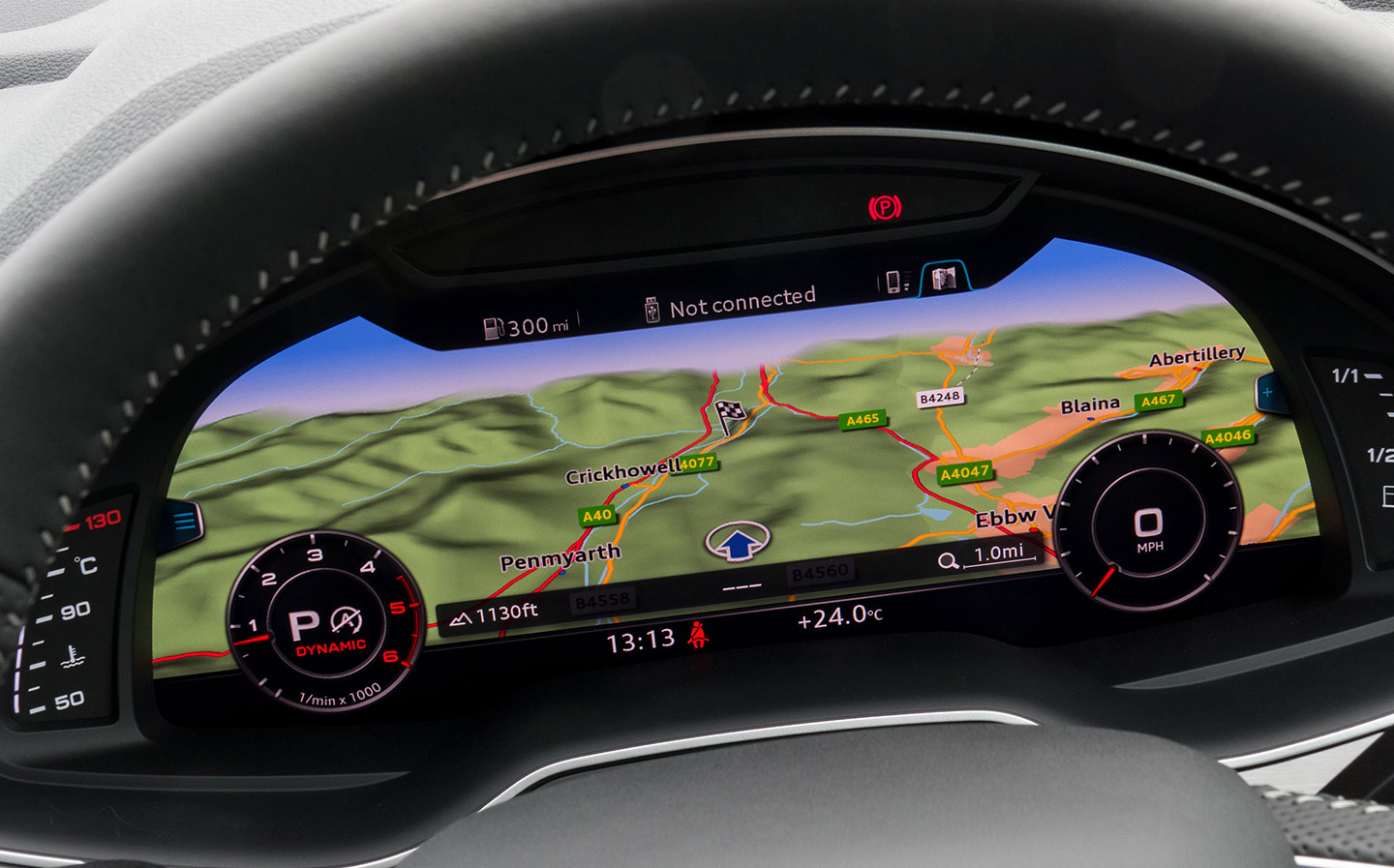 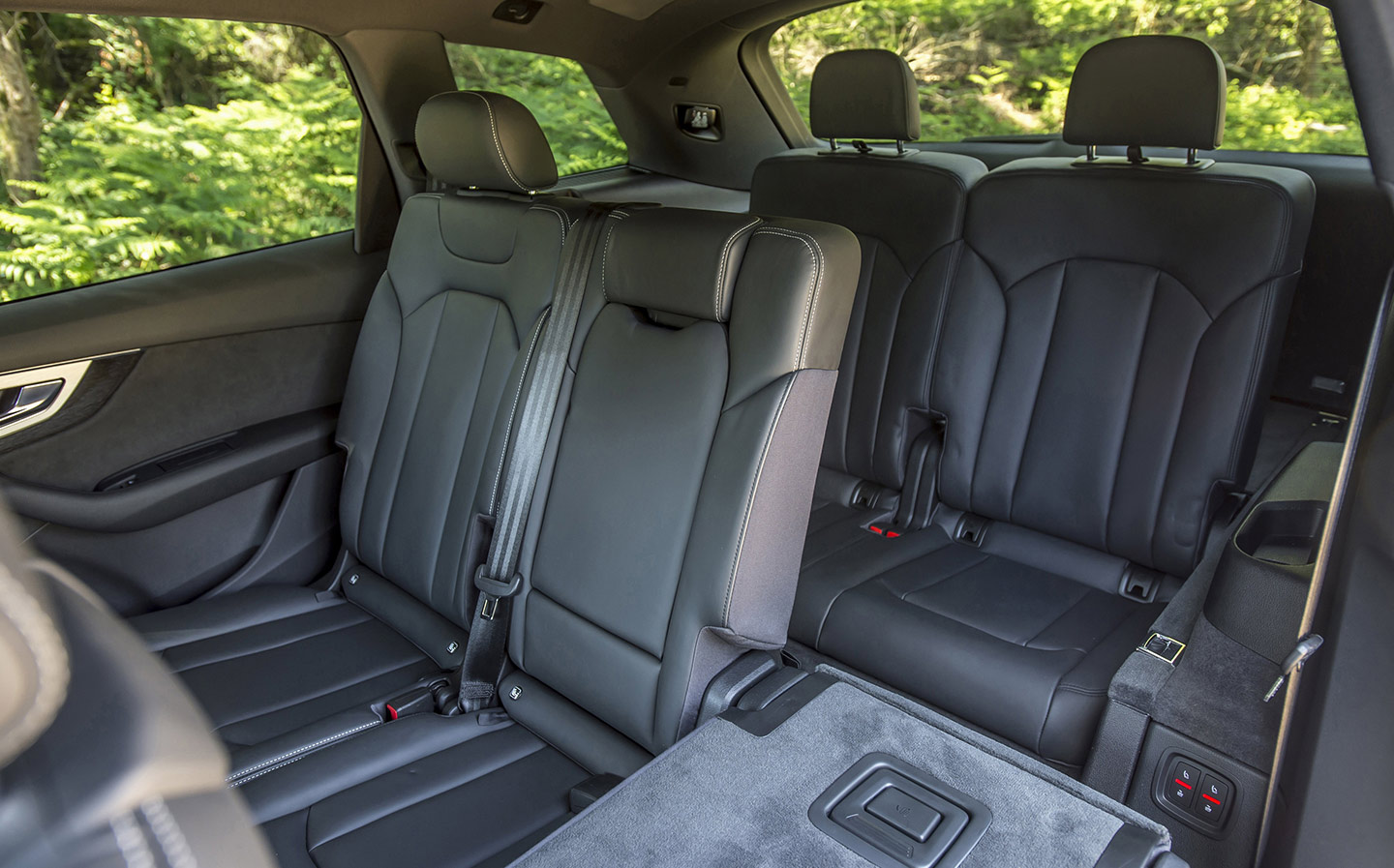 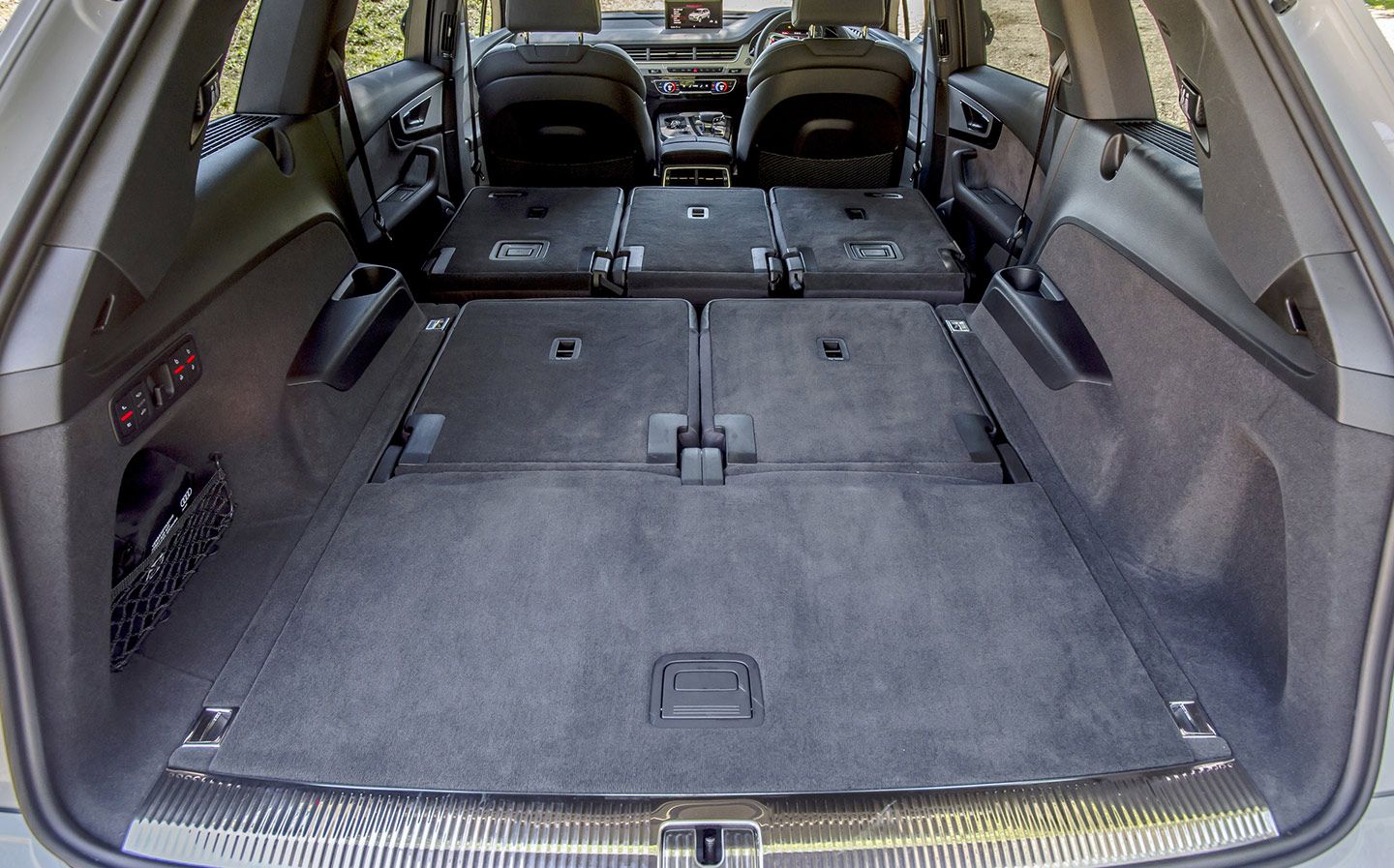 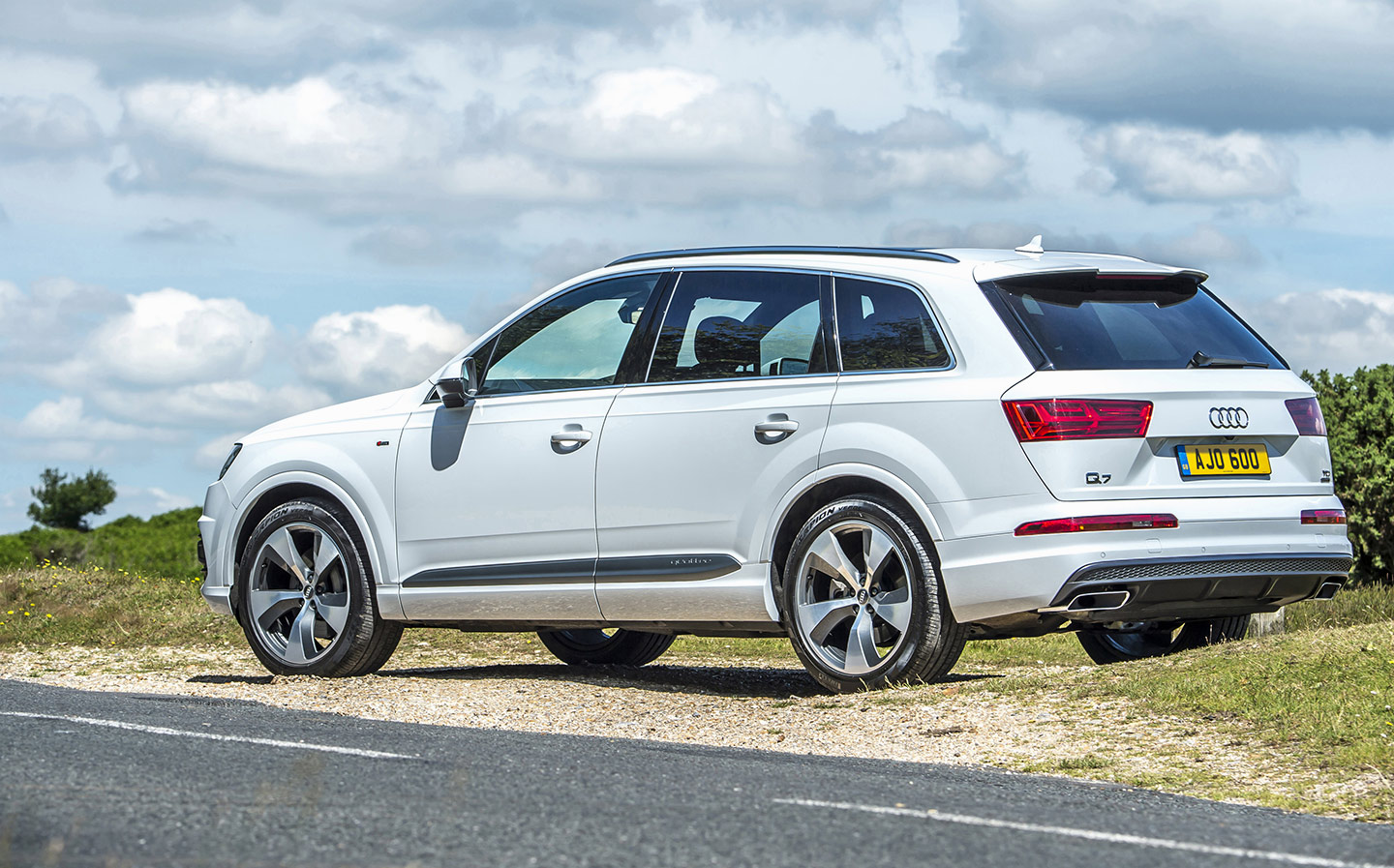 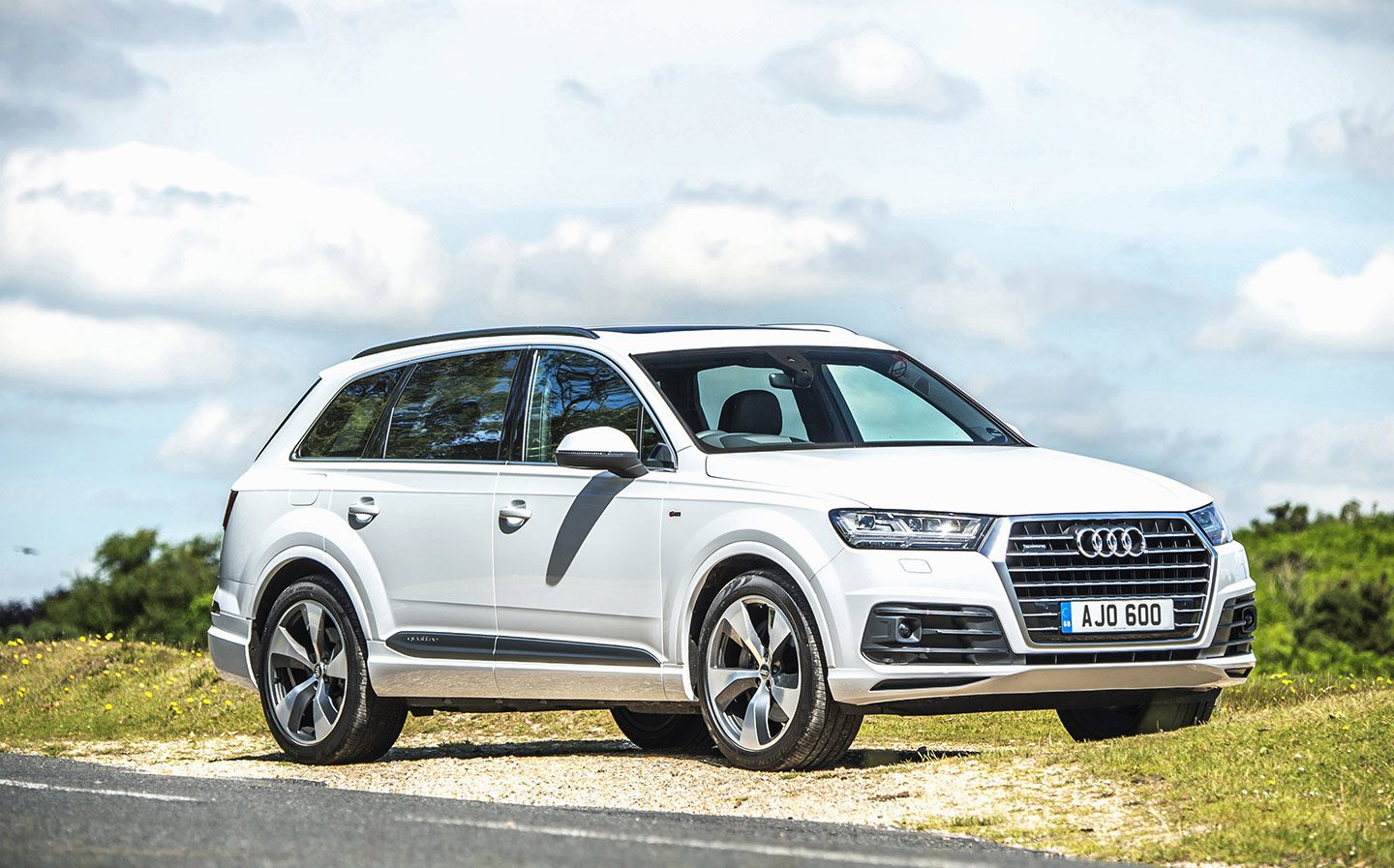 By AA Gill
Share Article
If Yoda were heading to the Highlands, he’d go in this
At a glance
Pros
Predictable handling
Smooth power delivery
Nicely presented interior
Cons
Memorably forgettable design
Try adjusting the stereo without calling you mother
Why would you want one in white?
Specifications
Cars > Audi > Q7

A CAR says something about you — perhaps more about you than anything else you own. A car is allegorically and practically the evocation of you and where you hope to get to. So makers of motors have a commonly discernible international language of character and aspiration.

A Tesla says that you’re in the front of the queue for the future but at the moment you’re driving from a grandiosely dull urban office to an equally dull suburban house with electric gates because they’re the only two places you can plug it in. A Harley-Davidson says you’re a retired orthodontist with a ponytail who likes to make his own piccalilli.

View the Audi Q7 cars for sale on driving.co.uk

The international language of motoring has been one of the greatest cultural inventions of the past century. But there is one make that takes a contrary view of the iconography of the metal box. Audi is a car that doesn’t say what you are or aspire to be, but rather what you’re not. It is the Alec Guinness of cars — a believer that less is good.

So an Audi first says its driver wouldn’t dream of being seen in a Mercedes, in Abuja or Stockholm. It is a car that chooses not to draw attention to anything about its owner. They’re not rich or flash; neither are they necessarily frugal nor modest. It doesn’t imply they’re a heavy-footed, lorry-swerving competitive driver. Nor on the other hand are they a middle-lane sat nav drone. They don’t use their car for flirting or for genital advertisement. But then neither are they predictable, monogamous and vanilla.

The point about Audis is that they are inscrutably sotto voce and self-confident. No Audi ever had a bumper sticker that said “Princess on board” or “I’ll give up my gun when they uncurl my cold, dead fingers from around it”. They’re driven by the billionaire who doesn’t appear in The Sunday Times Rich List. Even the company’s slogan was enigmatic: Vorsprung durch Technik. What does that mean? If you drive an Audi you know what it means. If Yoda had a car it would be an Audi.

The marque derives from the surname of the original owner, Horch — his forename was August — which he translated into Latin. It means listen. This is the listening car. I’m going to do the same thing with my name. This column is being written by AA Branchia, the columnist who can breathe under water.

“No one in the history of four-wheel-drive vehicles has wanted a white off-roader. It’s like having a bride in a rugby scrum”

I got the Audi Q7 for my annual reel up to the Highlands, where I need a motor that can comfortably go touring but isn’t going to embarrass itself on a grouse moor in the company of brogue-muttering Land Rover Defenders.

The first thing I noticed about it was that it was white. No one in the history of four-wheel-drive vehicles has wanted a white off-roader. It’s like having a bride in a rugby scrum. And I worry about the solecism from Audi. You’d expect it to have come up with some colour that doesn’t have a name; just a code number.

The next thing I noticed was all the things it wasn’t. It’s desperate not to be a Range Rover. There’s no braying drinks cabinet or place to put your guns. And it doesn’t want to be mistaken for a steroidal Porsche or a tanked-up Mercedes double-parked, blinking stupidly, outside some Mayfair restaurant. It’s going for the forgettably memorable.

And, apart from the colour, Audi has managed it quite nicely. I can’t recall a single external feature. Except that it’s a fat car, made to accommodate the adipose and engorged. Its wing mirrors bring to mind an angry albino elephant and have an annoying flashing yellow light whose purpose I never quite ascertained, though I think it was to unnecessarily but cleverly warn you of potential accidents when you were changing lane.

I drove north from Edinburgh, past the new road bridge that is going to leave the Firth of Forth with three of the most beautiful and spectacular bridges in the world. And then it was on to the A9, an infamous road through spectacular country and places with romantic-sounding names.

But it is an oxymoron, the most anti-driving road in Britain. It is covered with average-speed cameras, and seeing as the stipulated limit lurks somewhere below 50mph, and there is a lot of single-lane road where you will queue for 20 or 30 minutes behind some agricultural machinery or a caravan being driven by someone taking endless photographs of the scenery, the brief passages of dual carriageway encourage you to put your foot to the floor and overtake everything, imagining that you have a few miles in hand. You haven’t.

This road is known to be a stealth tax on touring Englishmen. With this in mind, the Audi has a very useful head-up display that projects your speed onto the windscreen.

The rest of the enigmatically minimal driver’s controls are simplified into a keyboard of impenetrable haiku. You try to change radio station and it will call your mother. Turn on the air-conditioning and it will flash up every cafe in a 50-mile radius. The sort of people who slip easily into Audis already know how to use all this stuff by osmosis.

“This year the curly roads were speckled with supercars, acid-coloured wedges of high-performance cheese. It looks absurd, as conspicuous as expensive litter”

After the A9, I crossed the Ness and passed the Black Isle, heading into Wester Ross. These are some of the most beautiful and entertaining roads in the world and I’ve driven them for years. Normally you’ll pass Dutch tourists, local lorries and occasionally a Harley ridden by a fat dentist. But this year the curly roads were speckled with supercars, acid-coloured wedges of high-performance cheese, haring around U-bend and across glen. No one up here could possibly afford a Lamborghini or a Ferrari. And even if they could, they would never want one.

This is now apparently a thing. This is where men who have high-performance insecurities have their cars driven up on low-loaders so that they can spend a weekend careering round long loops of west coast road. It looks absurd, as conspicuous as expensive litter.

The Highlands and this journey made me thankfully admire the déclassé bland confidence of the Audi. As a drive, it’s not really faultable. It’s predictable and unexciting. It wallows a little in the corners, and you’re constantly aware of its size. But it behaves well and doesn’t shout or cough when you put your foot down.

But there is a time delay, like talking on a dodgy video link. When you put your foot down, there’s a moment’s hesitation before the power kicks in. This is more annoying in the city than on country roads. But it’s a consequence of it being a diesel.

It’s a perfectly good motorcar, but no one passed a comment or asked me anything about it. And there’s precious little to say, which I suspect will have the anonymous Audi design team wiping their spectacles and giving little smiles of satisfaction. When it comes to Audis, the less said, the better.

Jeremy Clarkson is away.