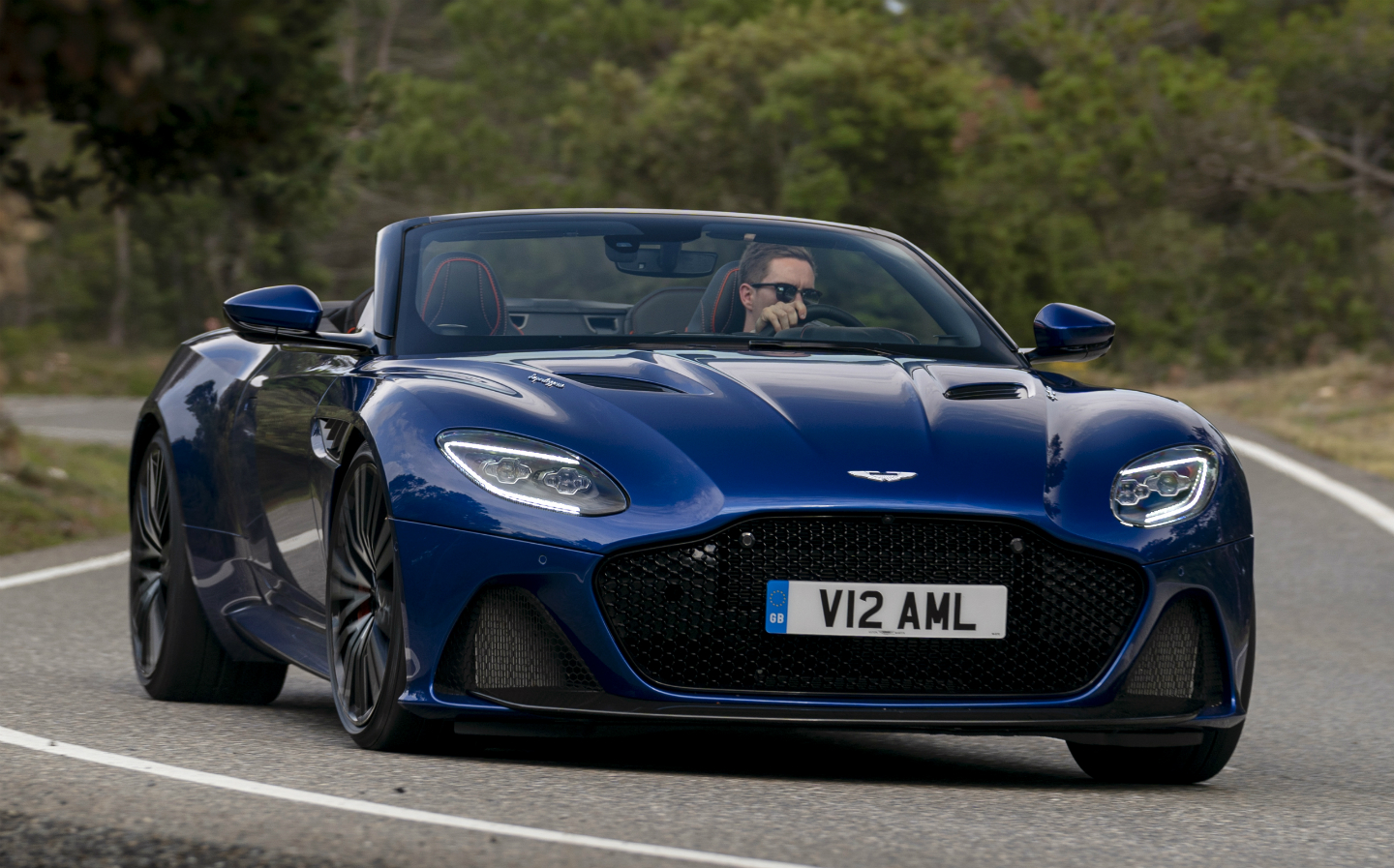 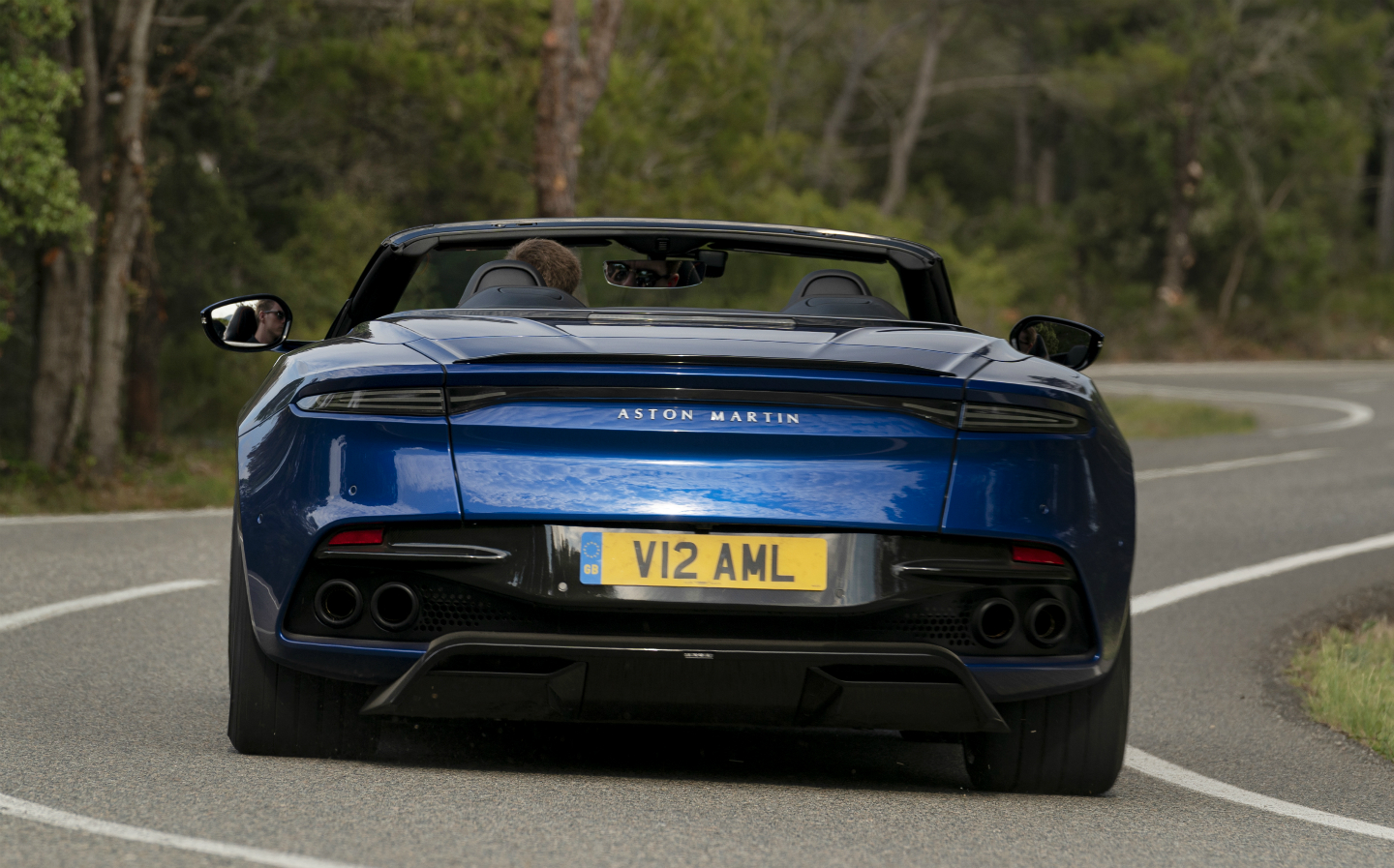 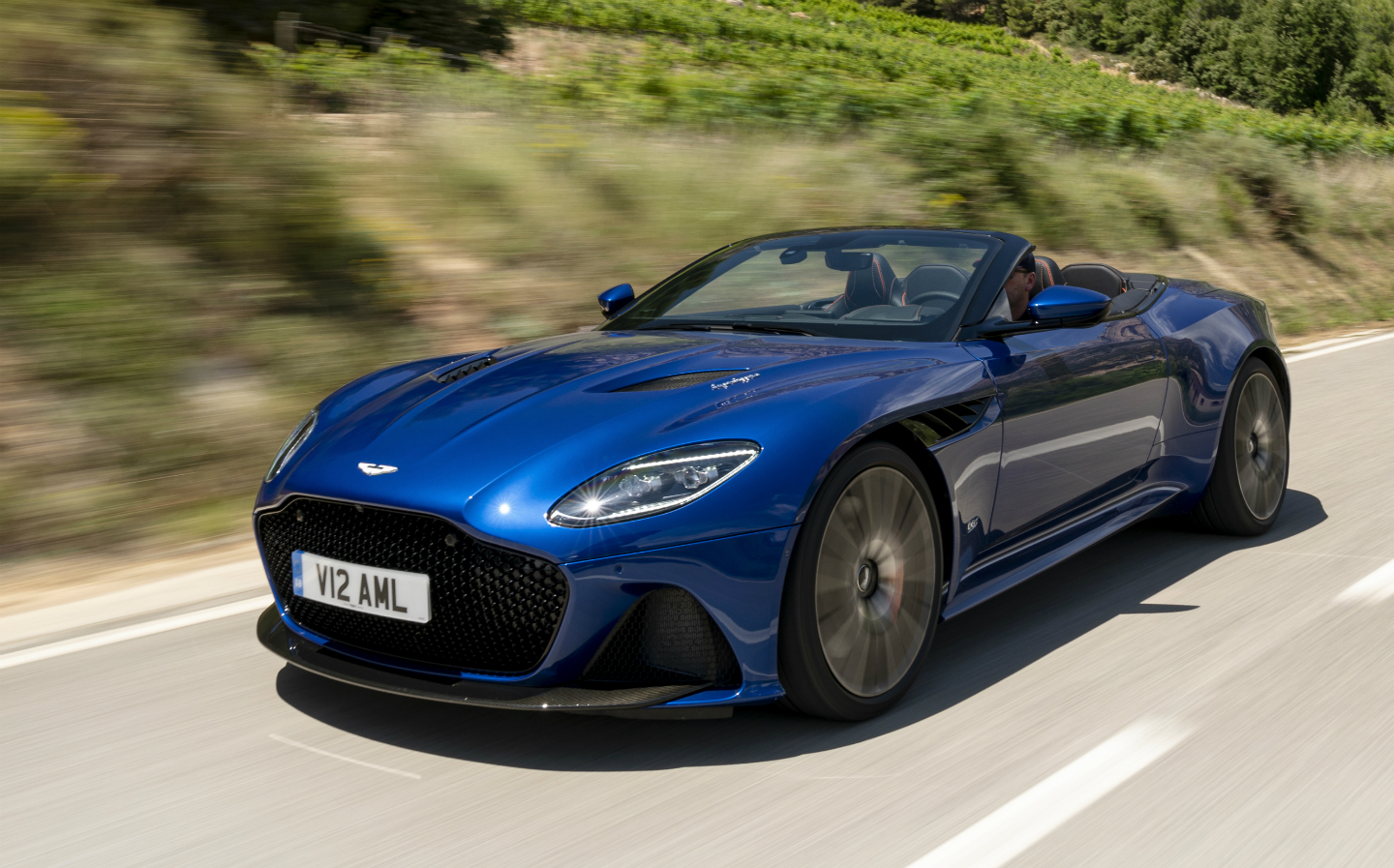 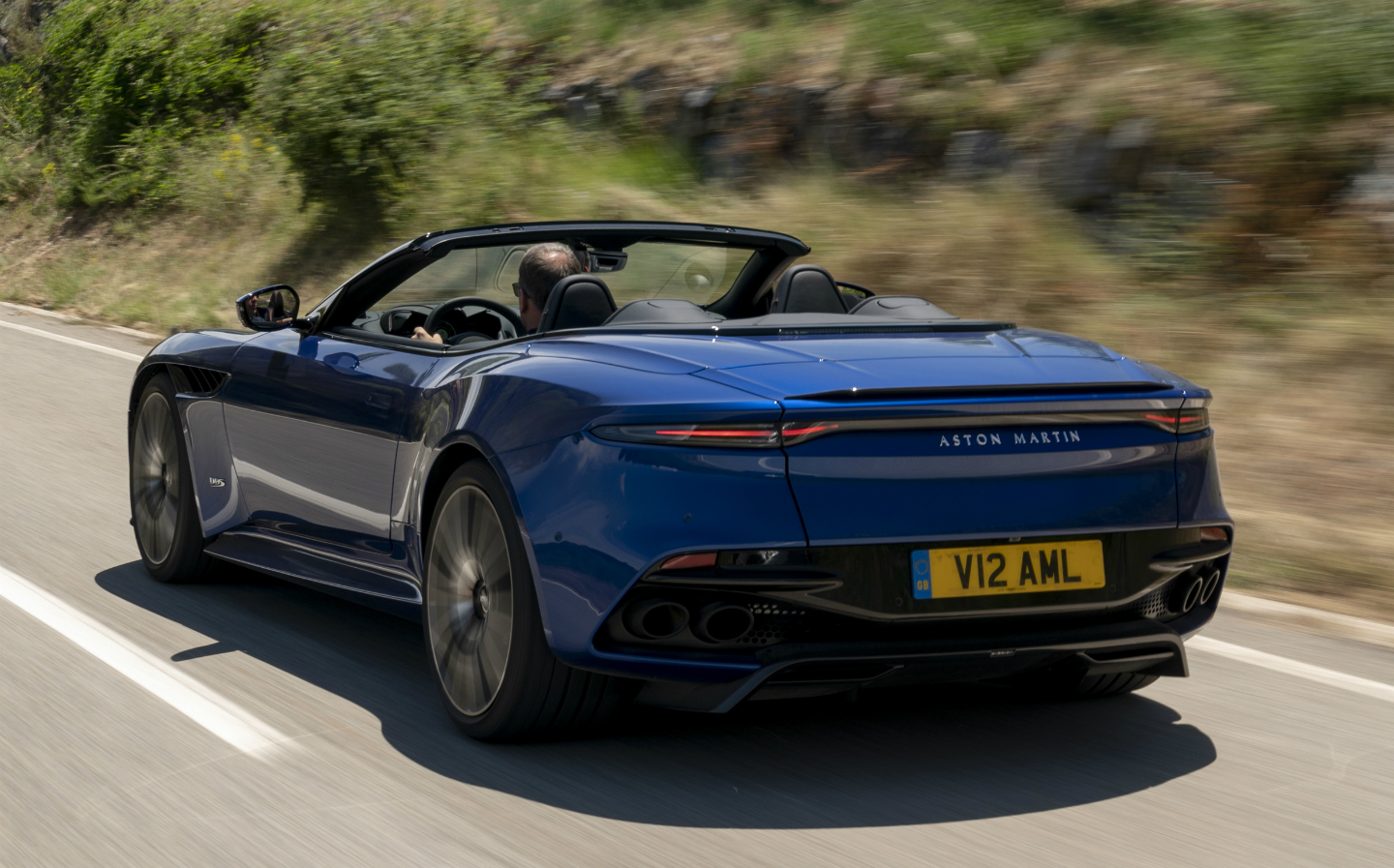 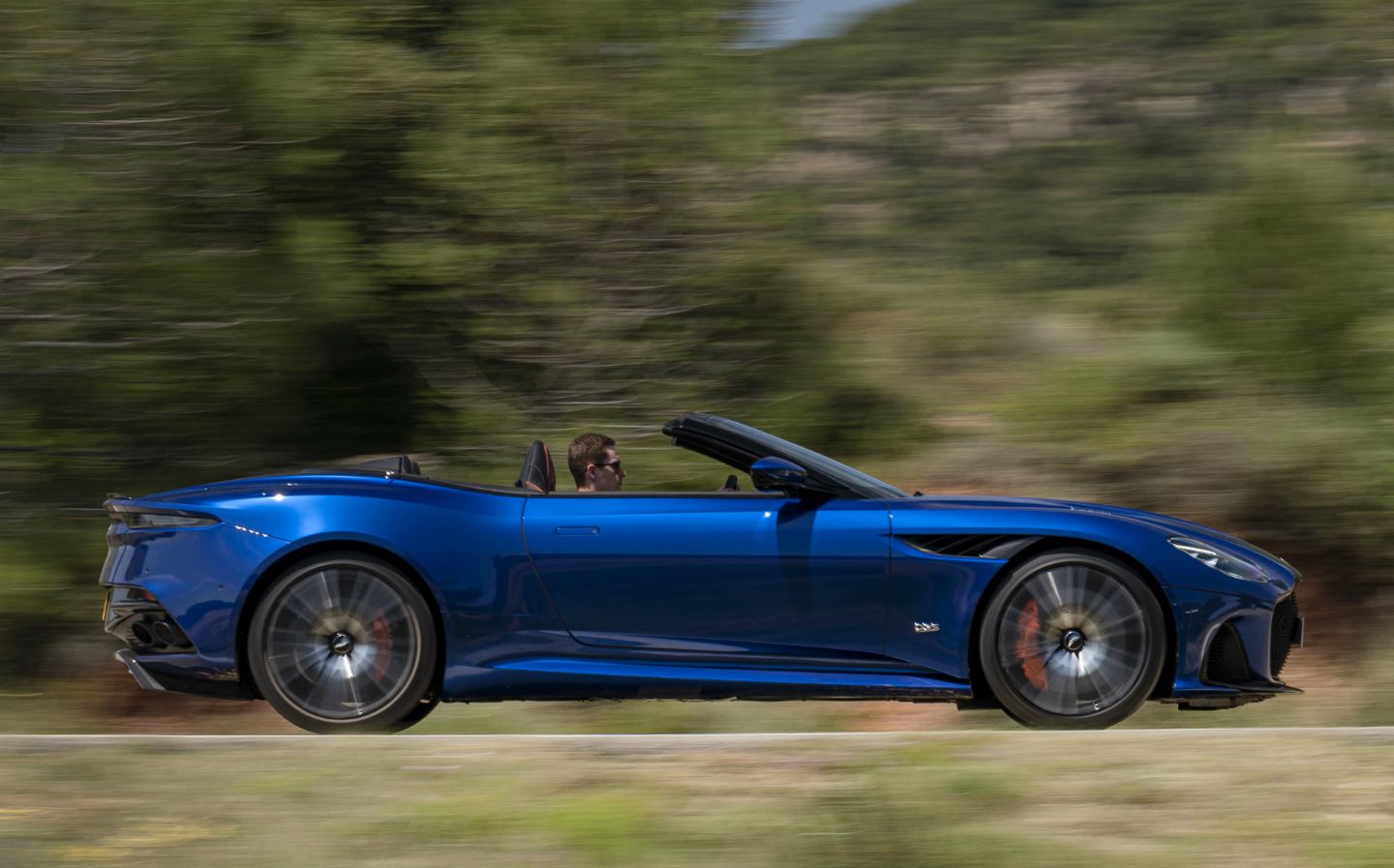 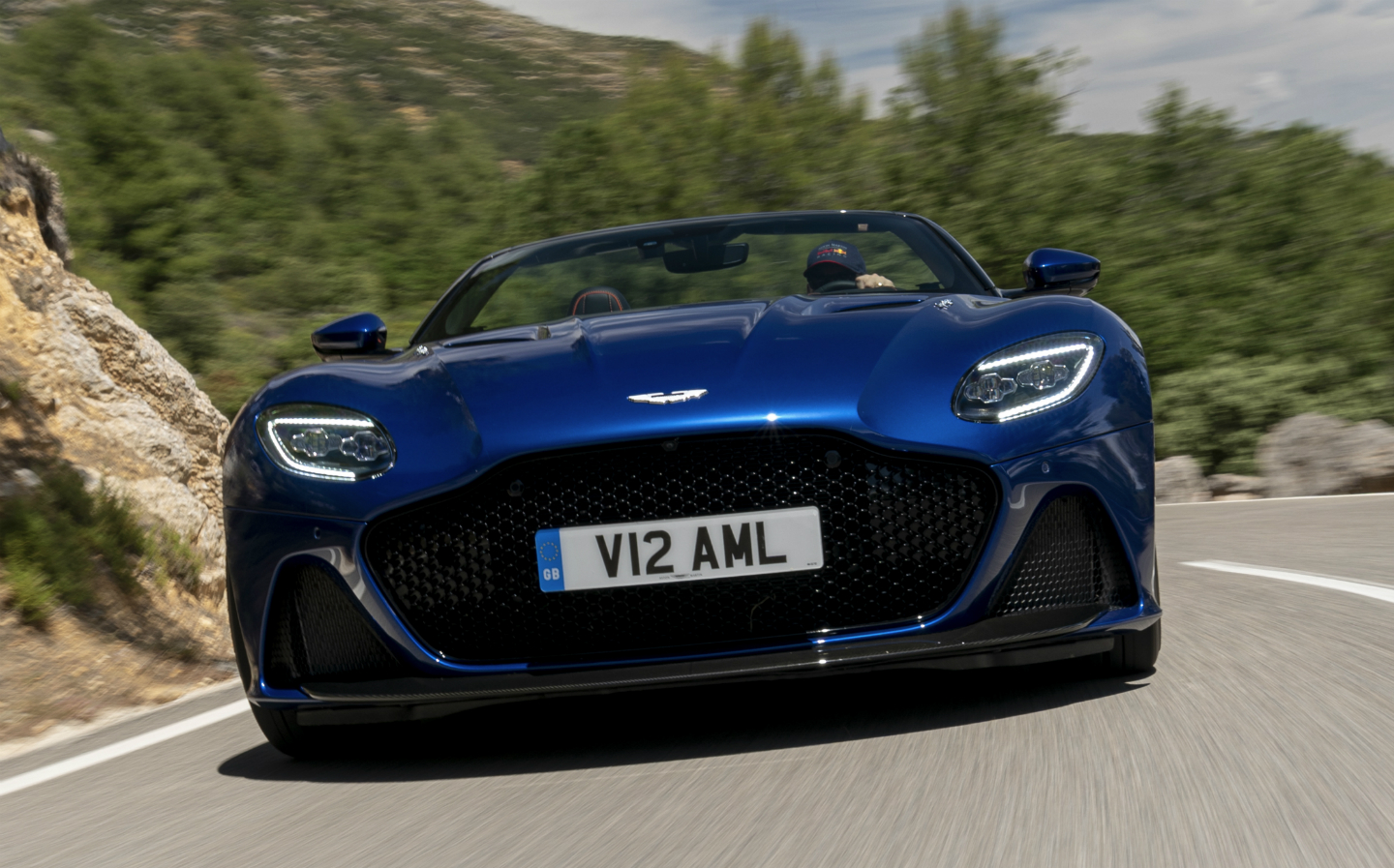 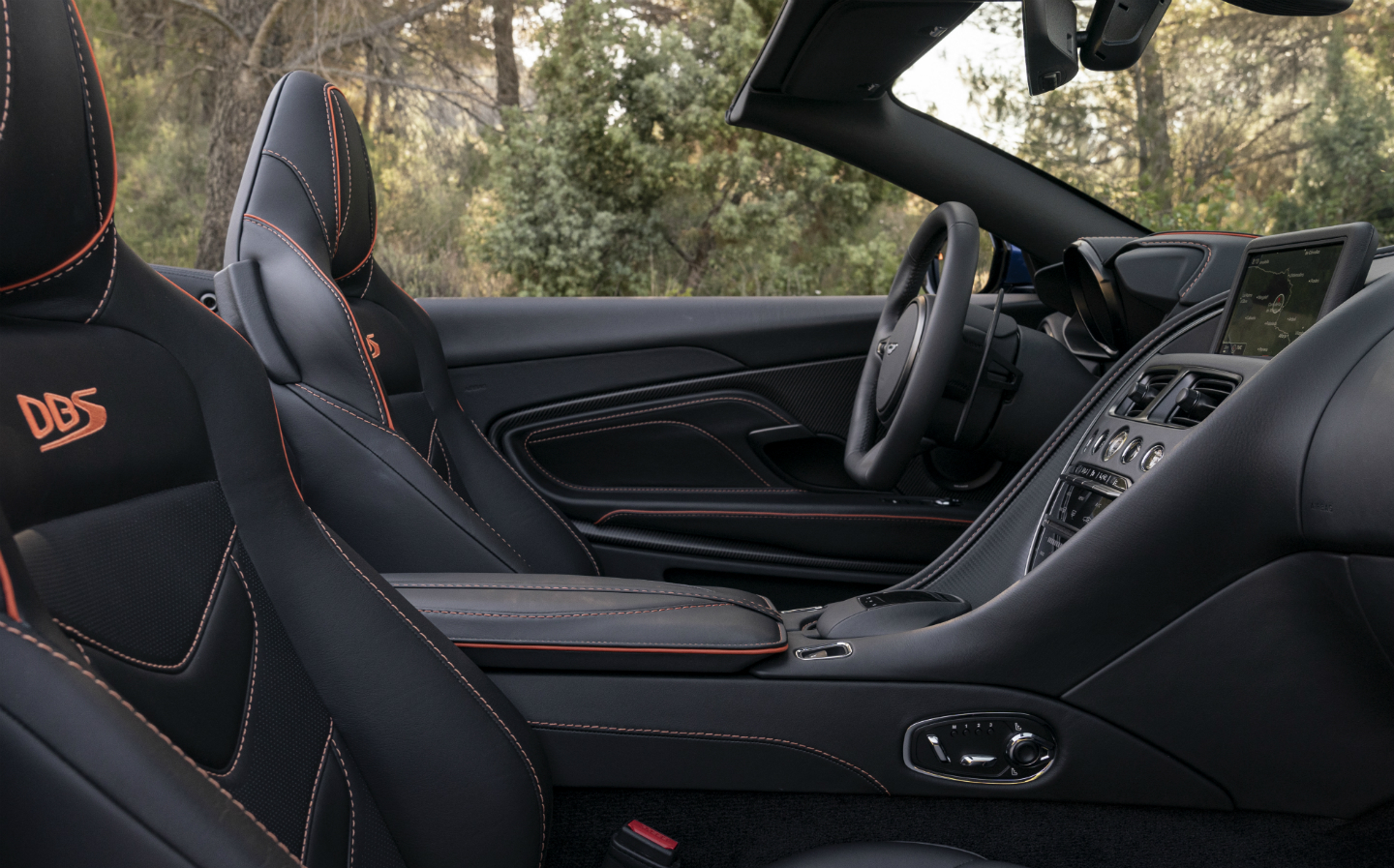 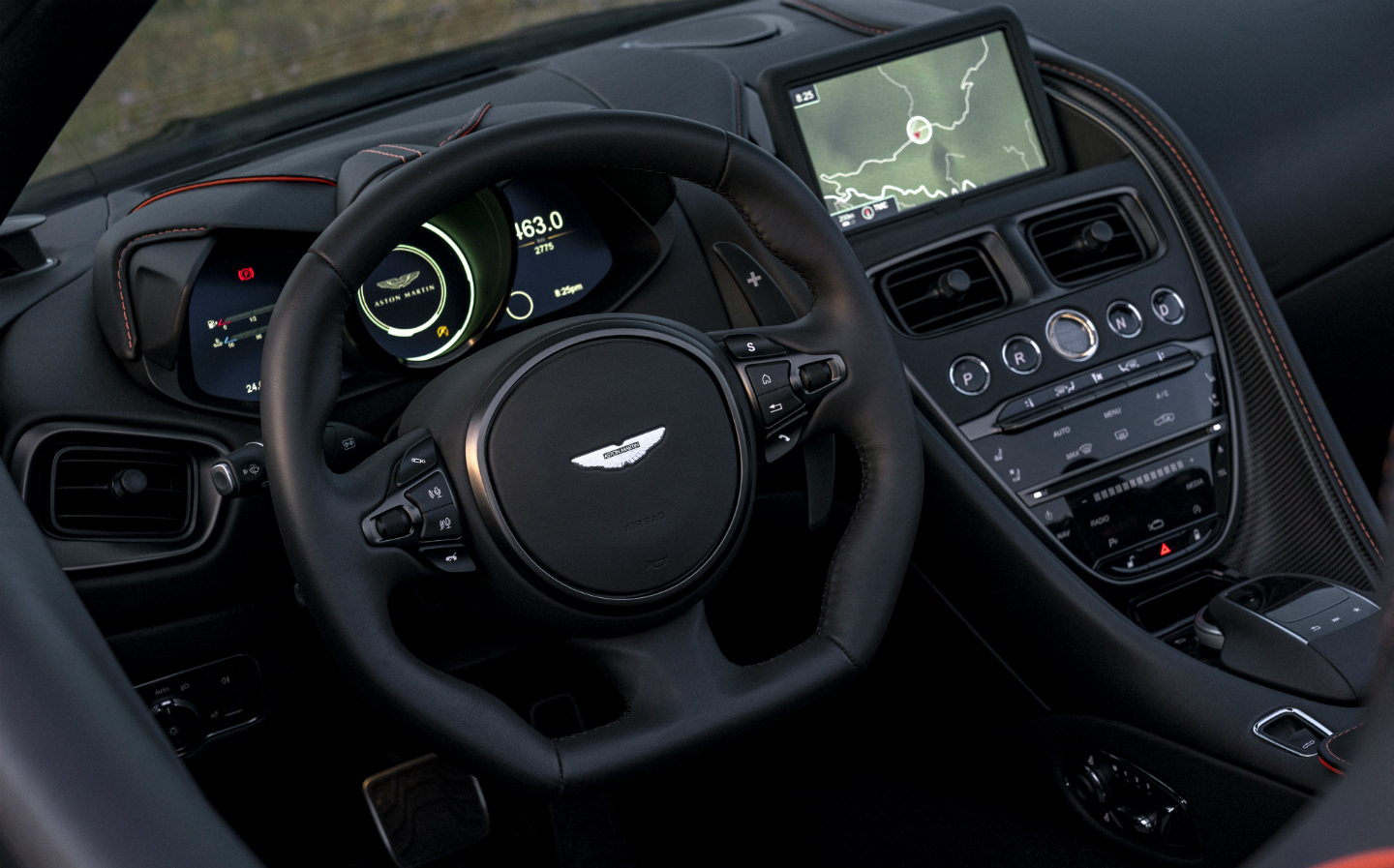 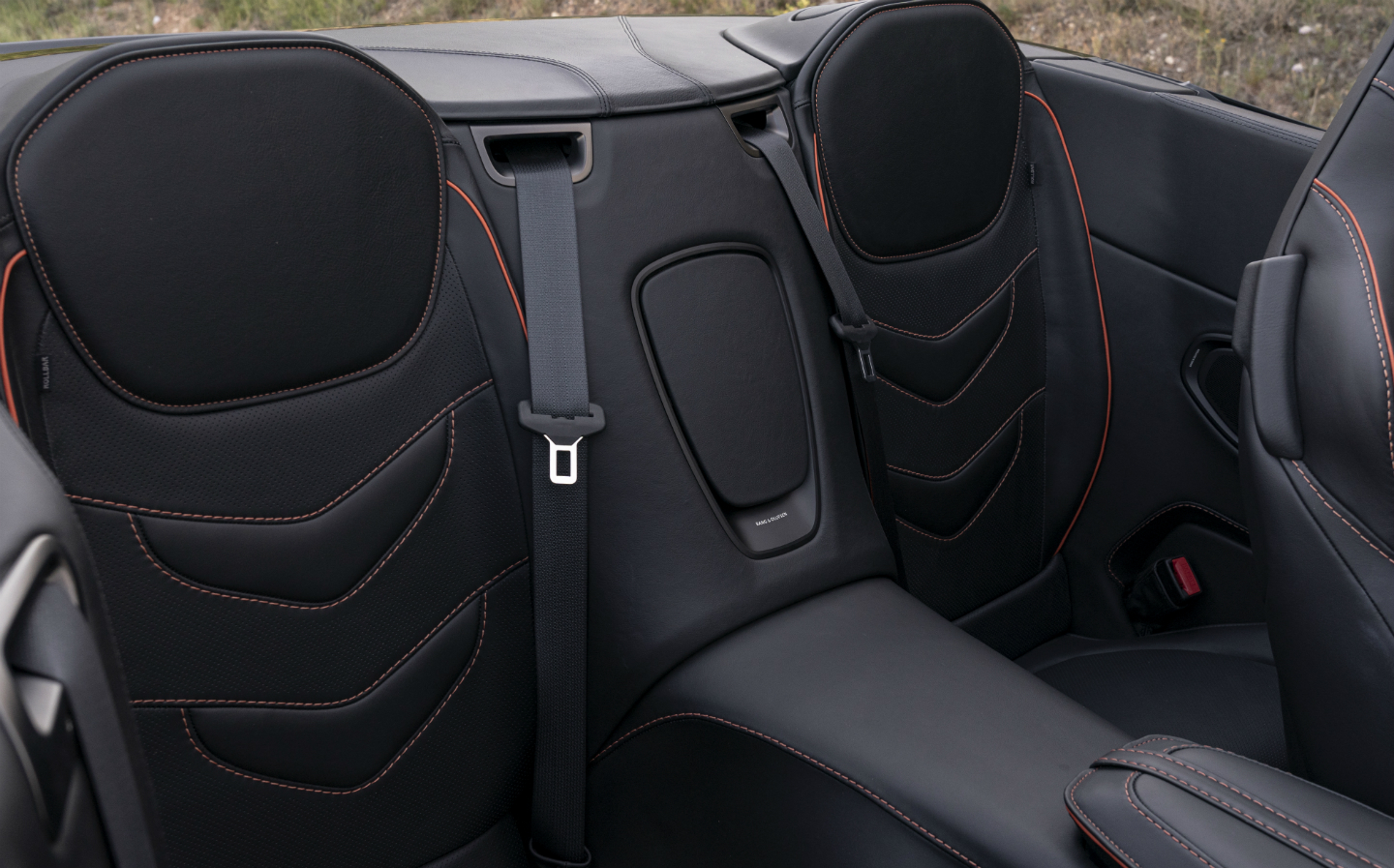 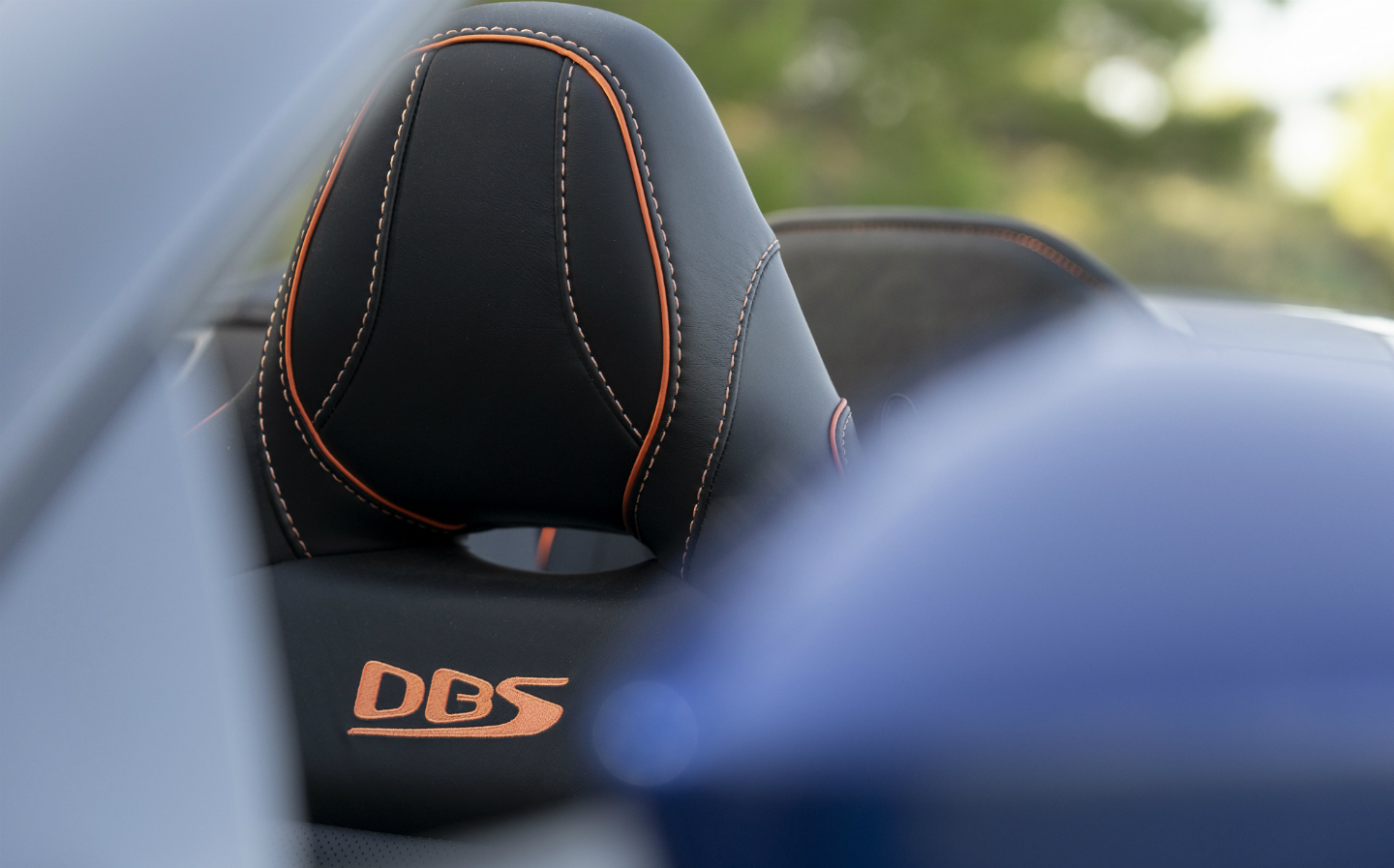 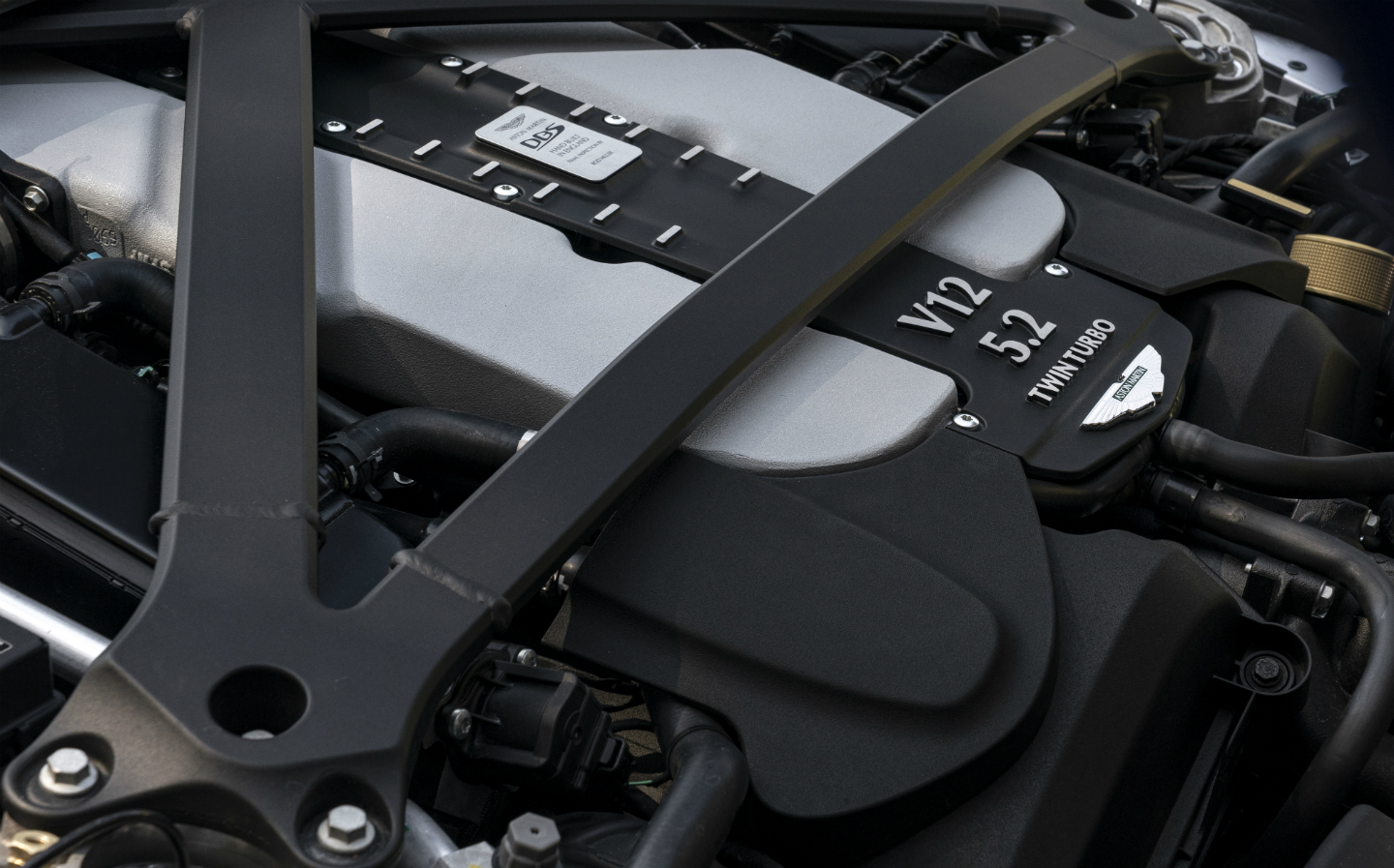 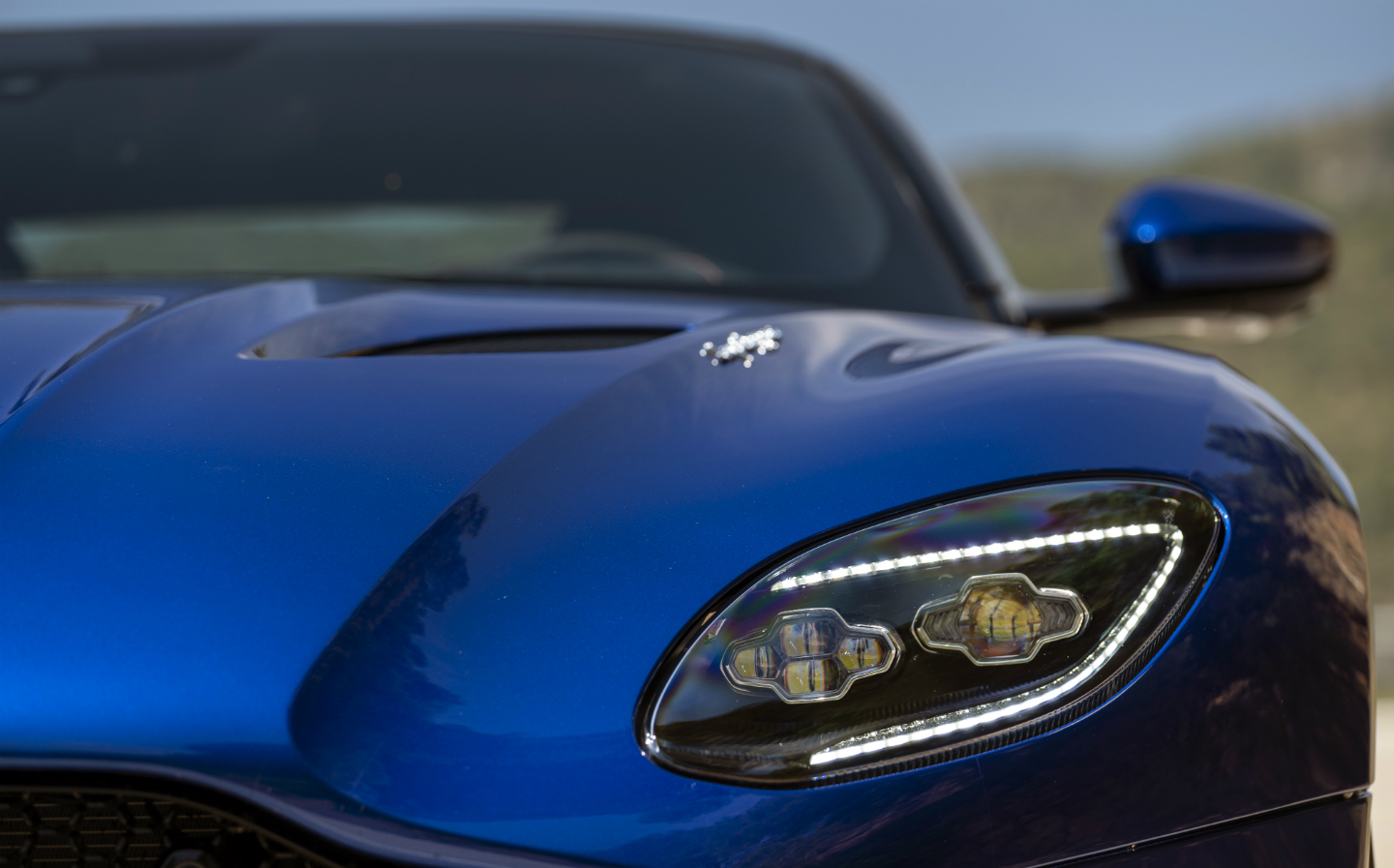 ASTON Martin is undergoing a major overhaul: its forthcoming Valkyrie is a hypercar like no other, with a no compromises F1-inspired aero package and featherweight construction, built around a mid-mounted V12 engine that produces 1,000bhp, which in turn is mated to an electric motor for even more face-stretching speed.

Valkyrie fever has spread down through the company and now Aston is taking on McLaren with a series of mid-mounted supercars including the recently-announced Valhalla, James Bond’s latest ride.

Perhaps the most interesting development comes with a plug: late this year deliveries of the British marque’s first pure-electric car — the Rapide E — will begin.

It’s a relief, then, that the company famous for making brutish grand tourers is also pumping out some cracking cars with the engine located between the front wheels. The exhilarating Vantage was voted Sports Car of the Year in the Sunday Times’s inaugural Motor Awards last year and for those looking to cross continents in style, there’s the truly excellent DB11.

The flagship of the range, the DBS Superleggera, takes the DB11 and turns it up to … 11. Downforce is increased by up to 180kg at the car’s 211mph maximum speed (with no extra drag), it is wider at the rear, sits lower to the road, has a trick differential and tweaked electronic stability software for keener handling, and is fitted with broader Pirelli P Zero tyres.

Which is all designed to help deal with the pièce de résistance lurking under a bonnet the size of Warwickshire: a tuned version of the DB11’s mighty 5.2-litre twin turbocharged V12. Aston managed to squeeze 715bhp out of it for the DBS — an increase of more than 100bhp over the DB11 and around 85bhp more than the track-focused DB11 AMR.

To cope with the extra power — and 664 lb ft of torque, more to the point — the car maker had to install a more robust version of ZF’s eight-speed gearbox to ensure it didn’t end up with a box of crumpled metal the first time a customer put their foot down.

Meanwhile, carbon fibre bodywork saves 72kg (superleggera means “super lightweight”), which doesn’t exactly make the car dainty (it has a dry weight of 1,693kg) but is the equivalent of removing a lump the size of another type of brute: the Hulk actor Mark Ruffalo (thanks, Google).

Despite these fearsome performance upgrades, the point of the DBS is not to break records at the Nürburgring; it’s been designed to cruise the ultra-rich (there’s a £225,000 price tag) from London to Monaco for the Grand Prix weekend without breaking a sweat.

Which means it needed to be not just stunningly powerful but also one of the most beautiful cars on sale, and according to our readers (and, frankly, anyone with functioning peepers) Aston pulled it off and then some — the DBS Superleggera coupé picked up the Best Designed Car of the Year in our 2018 awards. It may be a rippling slab of muscle but it’s also a truly beautiful machine.

When creating the convertible version, then, Aston Martin’s designers and engineers had to ensure not only that it was engineered to be relaxing top-down cruiser at potentially well over 100mph, with keen, engaging handling, but also retained its drop dead gorgeous looks and decent road trip practicality.

Well, shock: they managed it.

Let’s start with the styling. Forward of the A-pillars, the Volante is virtually identical to the coupé, aside from a hidden tweak to guide turbulent air out of the wheel arches, and the side profile only reveals small differences (ignoring the lack of roof, of course).

Given that there is a DB11 Volante you’d think chopping the roof wouldn’t be too tricky but with a wider track and wheels, working out how to package the folding roof under the boot lid in the DBS had its own challenges.

In addition, removing the roof can ruin air flow, and the lack of a “C-duct” on the Volante, which on the coupé channels airflow around the C-pillar, meant that aero would be further compromised. In the end, Aston managed to sort it all out very neatly indeed but if you stare long and hard, you’ll spot the subtle differences, particularly the smaller rear light cluster. The pinched lines across the boot lid have a slight whiff of Porsche Cayman about them, but that’s no bad thing. 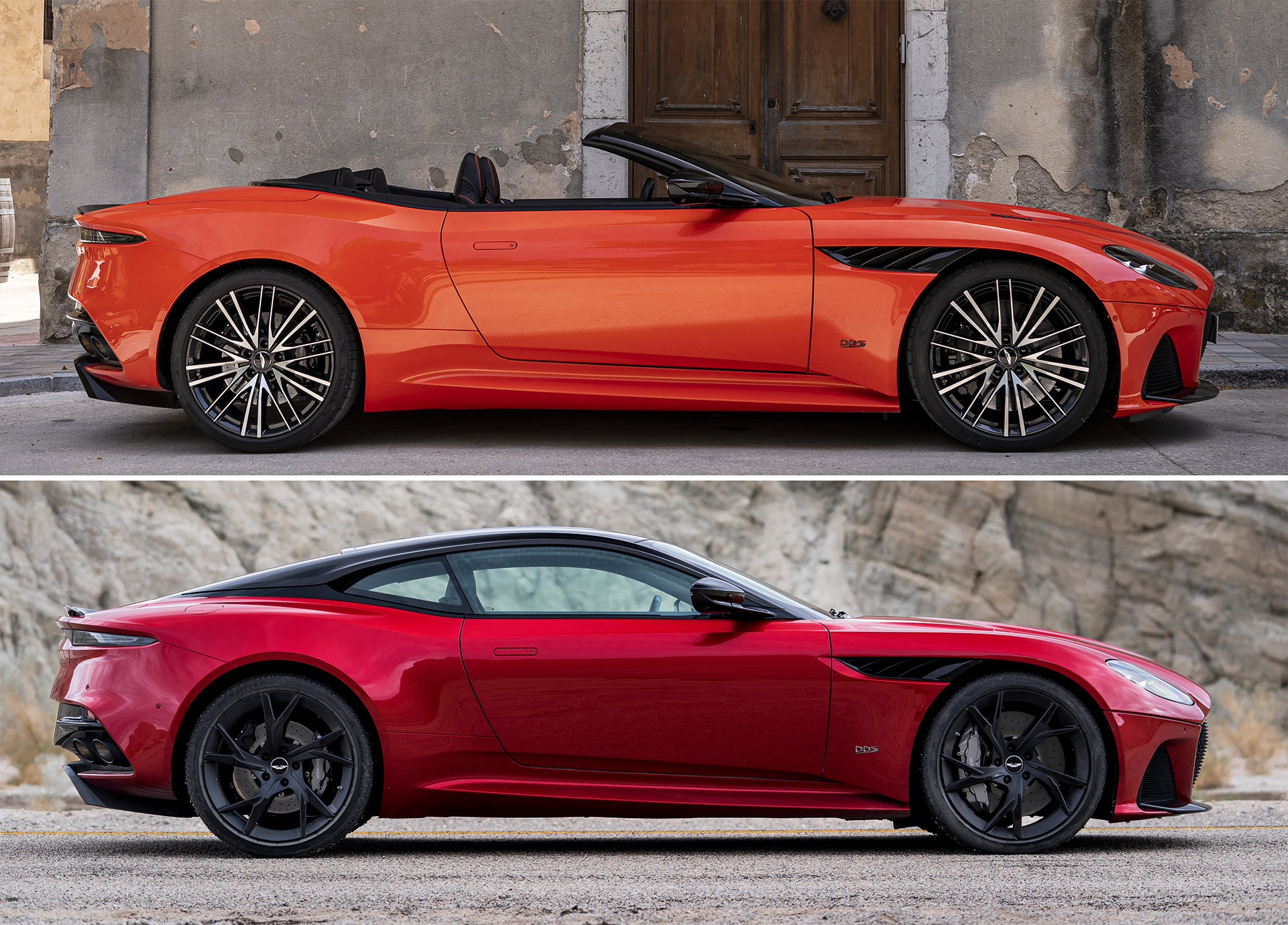 The fabric canopy itself folds down in 14 seconds (via the key, should you wish) and stows neatly in the top section of the boot, with the 260mm stack height leaving a surprisingly decent amount of space below for a few overnight bags. Aston has exposed the fabric to extreme heat and cold, testing it over 100,000 cycles, which it says is the equivalent of 10 years’ use.

Climb into the cockpit and you notice the interior is unchanged from the coupé, with the familiar borrowed-from-Mercedes switchgear and infotainment controls — in itself no bad thing, as it’s smart and solid, but it isn’t the leading-edge kit one might expect in a car that costs the best part of a quarter of a million pounds before options. The infotainment display isn’t a touchscreen, for example; instead it’s controlled via the Merc scroll wheel in the centre console.

Still, any fears that the display might be washed out or impossible to view in strong sunlight were immediately allayed, and the pronounced hoods over the digital instrument binnacle help keep the all-important driver info visible at all times.

The DBS has rear seats in the same way that a Tyrannosaurus Rex had arms. You could maybe squeeze a couple of your smaller, more glamorous friends in there but once you’ve reached your destination and they’ve unfolded themselves, don’t expect a thank you. Children might be OK.

Fire up the V12 and hit the road with the roof down and, open air experience aside, most drivers would be lying if they said they can notice a huge difference in ride and handling between the two variants. As is the way with soft tops, which lack rigidity through the roof and so require strengthening in the chassis, the Volante is heavier — to the tune of 170kg.

But the suspension has been masterfully tweaked to compensate and the sheer savageness of the motor negates almost all of the performance deficit: 0-62mph takes 3.6 seconds, just two tenths of a second slower that the coupé. Keep your foot down and 3.1 seconds later you hit 100mph, with absolutely no sign that the Volante has had enough.

That engine is an absolute masterpiece: quiet and refined at low speed but hugely potent in almost every gear (you can drive almost everywhere in fourth, we found). And it bellows like Pavarotti when let off its leash, rolling its Rs when dropped from GT down through Sport into Sport Plus mode, the exhaust over-run ricocheting off the walls of buildings in a symphony of gunfire. Removing the lid only makes the experience even more raw and satisfying.

And then there’s the chassis dynamics, which are nothing short of sublime. Weight may be up but weight distribution is actually marginally nearer equlibrium than in the hard top, at 51:49 front to rear, and the aero changes mean, again, a near-perfect balance from the ground effect.

Sweeping the DBS through fast, flowing Spanish highways — a world away from the tight, congested, potholed roads we’ve become used to in the UK — is one of those rare pleasures that reminds a car enthusiast why they first fell in love with driving. The noise; the drama; the delightful composure through the bends; the way you’re pressed into the seat through dips in the road and then suddenly become weightless over crests, all the while the car remaining composed and stable as the Venturi effect sticks it to the asphalt.

You know that moment in Pixar film Ratatouille, when stuck-up restaurant critic Anton Ego tastes Remy’s cooking and is instant transported back to his mother’s kitchen and her home-cooked meals. That.

On twistier stuff, it’s fair to say the DBS, with its long nose and wide track, isn’t most at home, but it would be wrong to say the Volante is a handful. Grip is still immense and even in Sport Plus mode, giving it a fair crack of the whip, it’s harder than you might think to get the Volante out of shape, despite the meteoric power delivery. The predictable handling and feel through the wheel is surprisingly confidence-inspiring in a way that many supercars simply are not.

Through towns, despite being wider than your average motor, the DBS Volante is so easy to drive it’s almost comical, and whereas you might get a few sniffy looks from locals in a Ferrari or Porsche, the Aston attracts only admiring glances. I’ve only experienced this once before in a luxury GT — the Bentley Continental has similarly universal appeal.

Buffeting? Aston had fitted the wind break above the rear perches of our test car, which resulted in an unbelievably low level of turbulence in the cabin, even at the highest speeds. Remove it and the experience at 200mph+ is likely to be less agreeable, but then that’s not something we tested and is unlikely to be experienced by most of Aston’s riviera-bound customers.

What’s more, in baking heat with the hood down, the DBS Volante did an admirable job of keeping us cool, with the blowers working in unison with the beautifully appointed ventilated sports seats to eliminate perspiration. Much of our day behind the wheel was spent this way because, well, why would you want to raise the roof of a car like this unless absolutely necessary.

Of course, at some point near the end of our test drive we did have to remind ourselves that we were testing the car and it was absolutely necessary to experience the Volante with the roof up. With a whirr and a schlock-click, we were suddenly aware of just how much noise you get from the wind and road with the roof down; it was almost silent by comparison. And within seconds the air conditioning had turned the cabin ice-cold, and we realised we’d actually been slowly roasting all day. The difference was dramatic. Aston even says there’s an extra 5% structural rigidity with the roof up. We’re sure Autocar would have noticed that.

Finding fault with the Aston Martin DBS Superleggera Volante is difficult. You can grumble about the mildly-dated interior, but honestly, it’s fine and, being Merc’s tried and tested tech, unlikely to go wrong. Practicality is mildly compromised, but not by much. It’s a bit heavier… important for a sports car but in a V12 GT? Bah. And fuel economy? Do you care? Really?

One other, much more important point, though: Aston took us to northern Spain to try out this car, and hand picked a mix of  sensational, smooth, flowing roads for us. However, buy a DBS Volante in southern England, where the roads are jammed with cars and covered in humps, or use it in rural parts of the UK through tight, twisty country lanes, and frustration could soon set in. Nowhere would you be able to let the engine sing or the chassis dance. Nowhere would you be able to experience its true potential.

On the right roads, though, with the right weather, the DBS Superleggera is a sublime experience; a riot of the senses and as close to motoring nirvana as I’ve experienced. I’m not sure a mid-engined supercar would stir the soul in quite the same way.