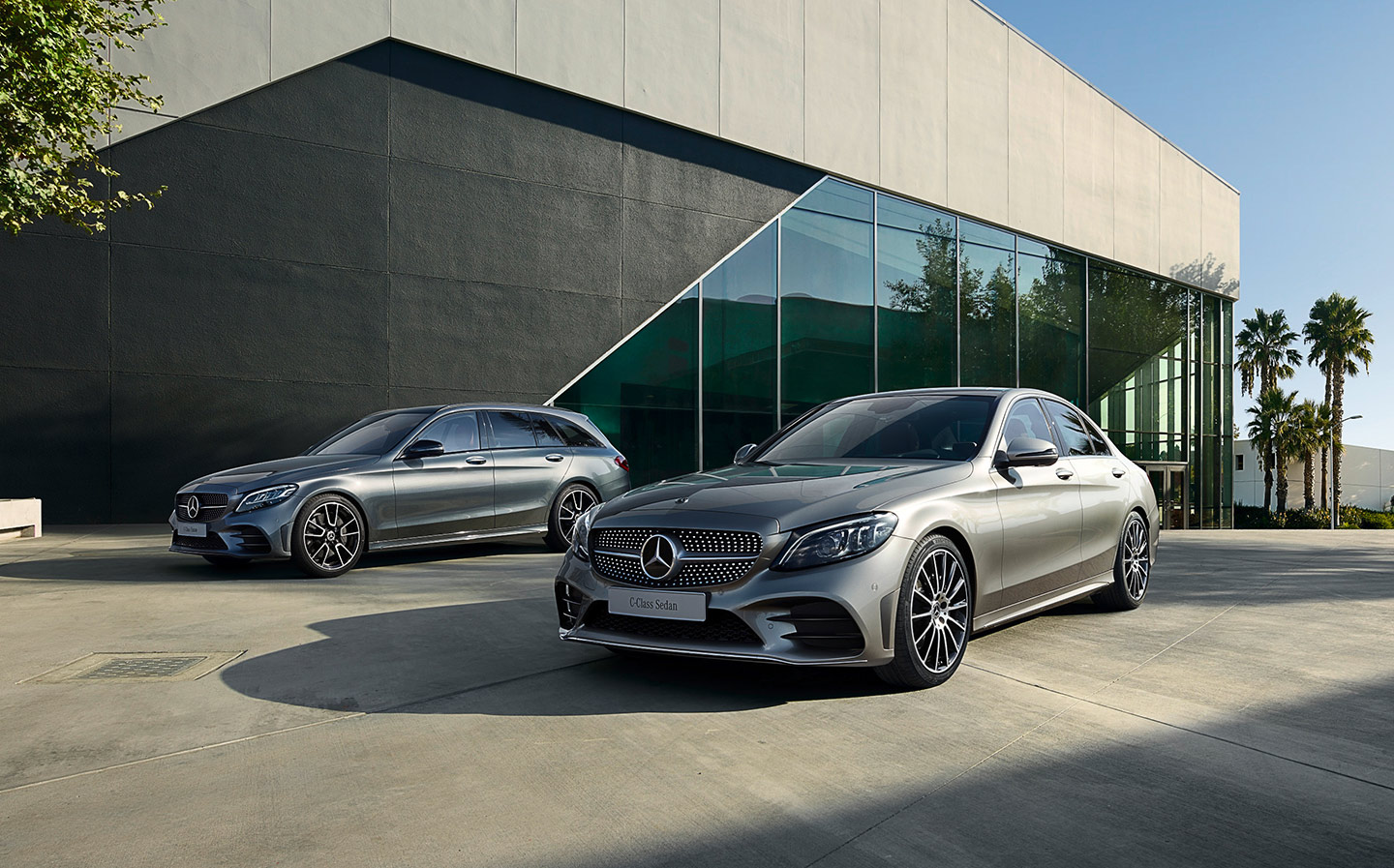 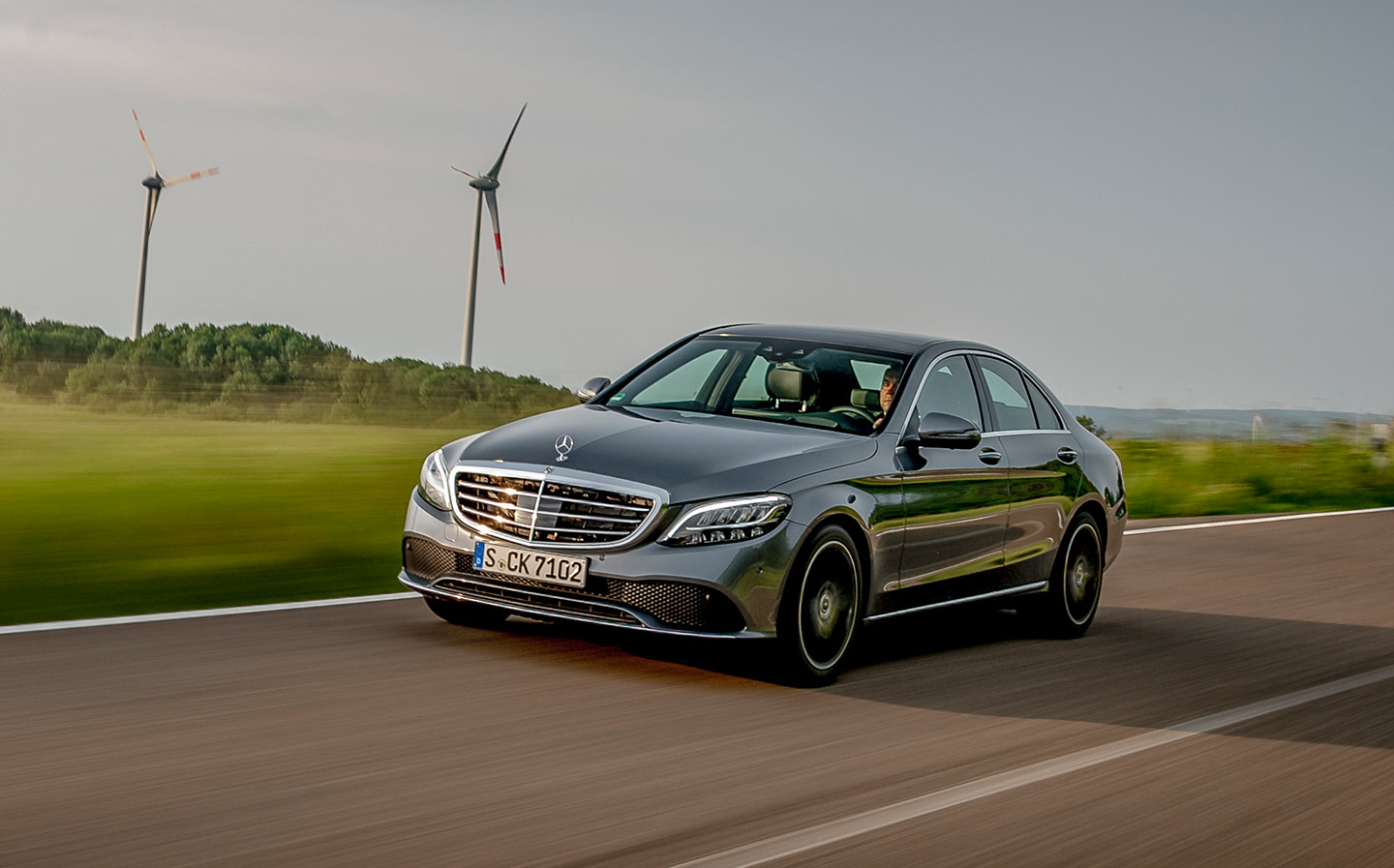 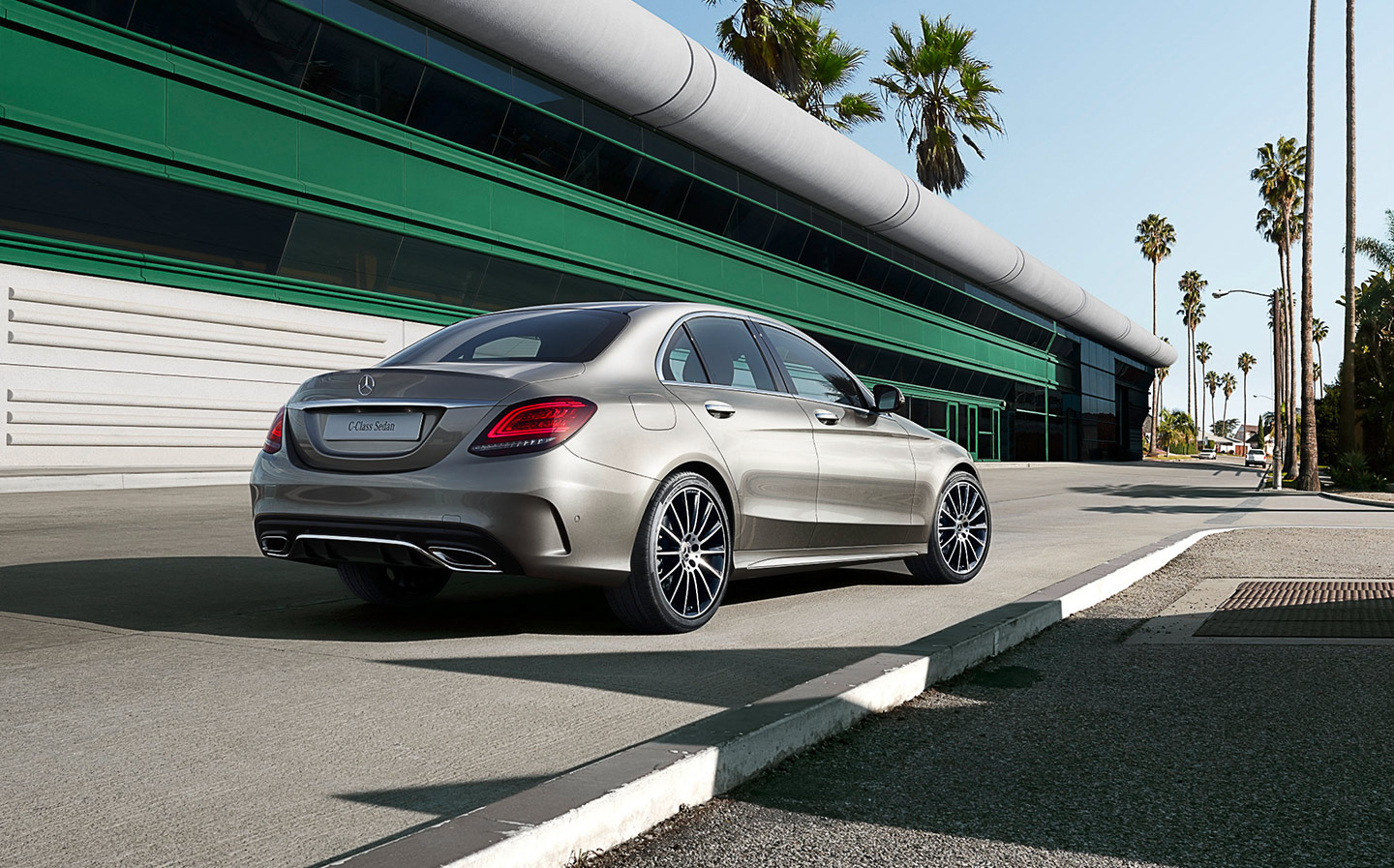 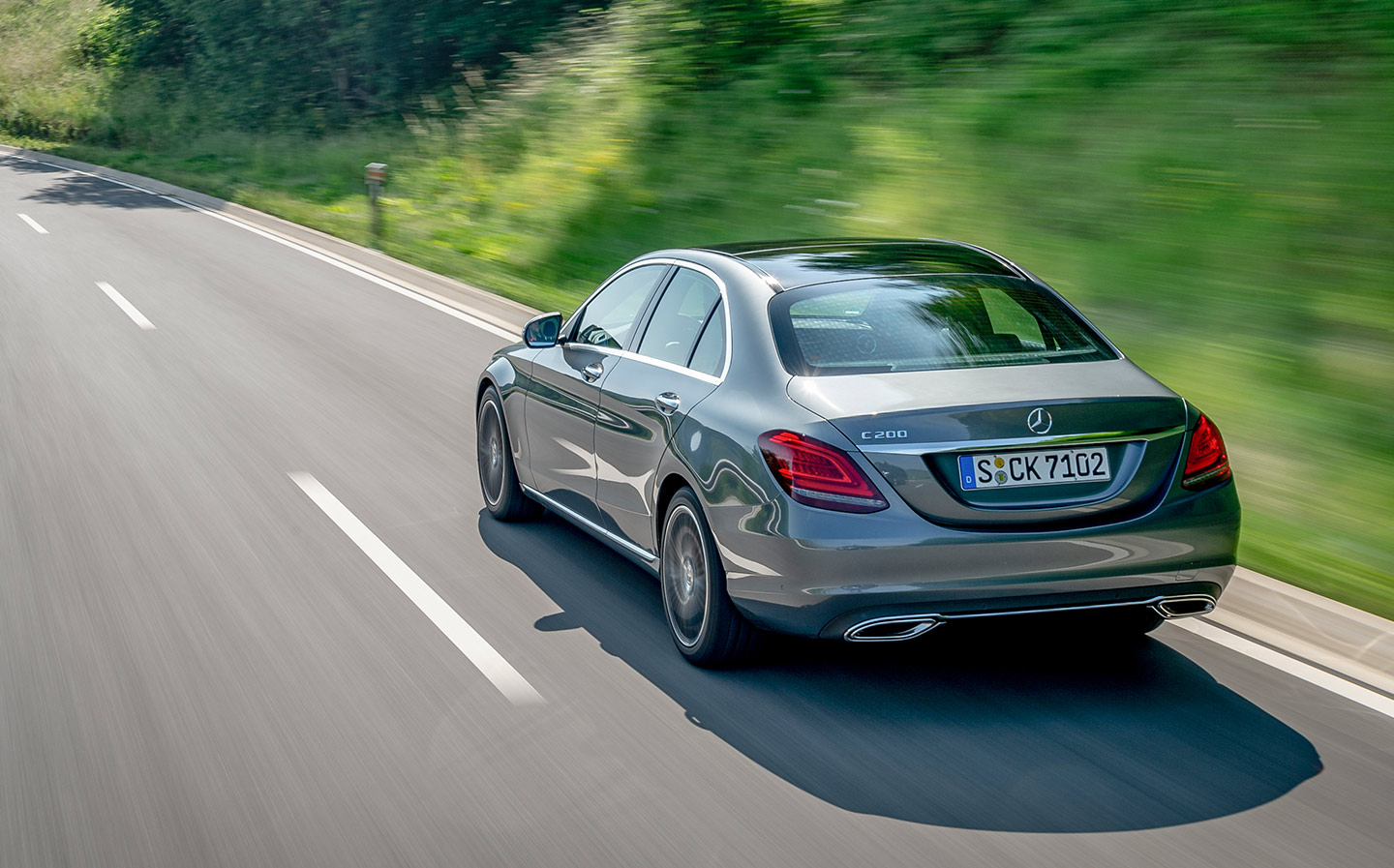 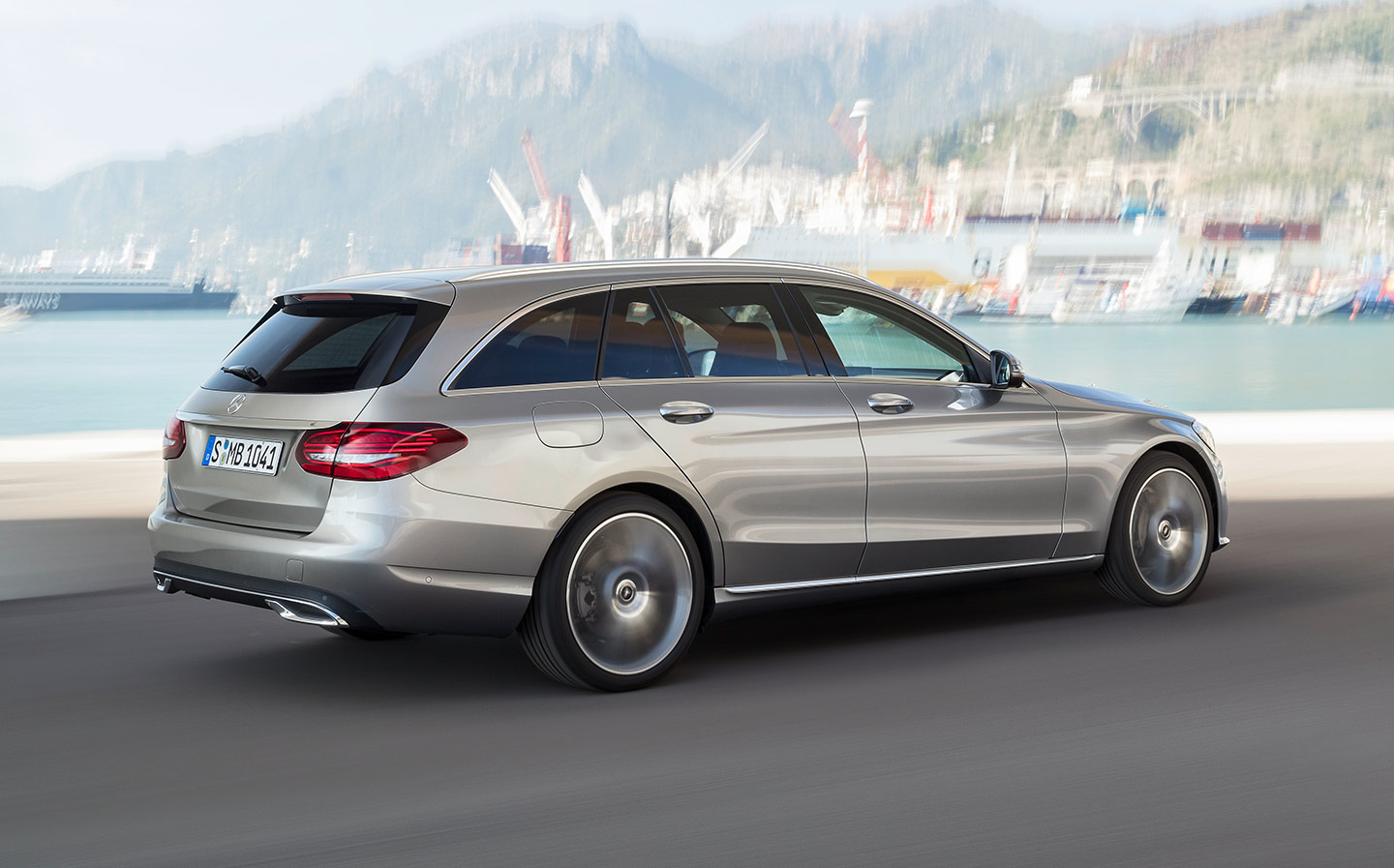 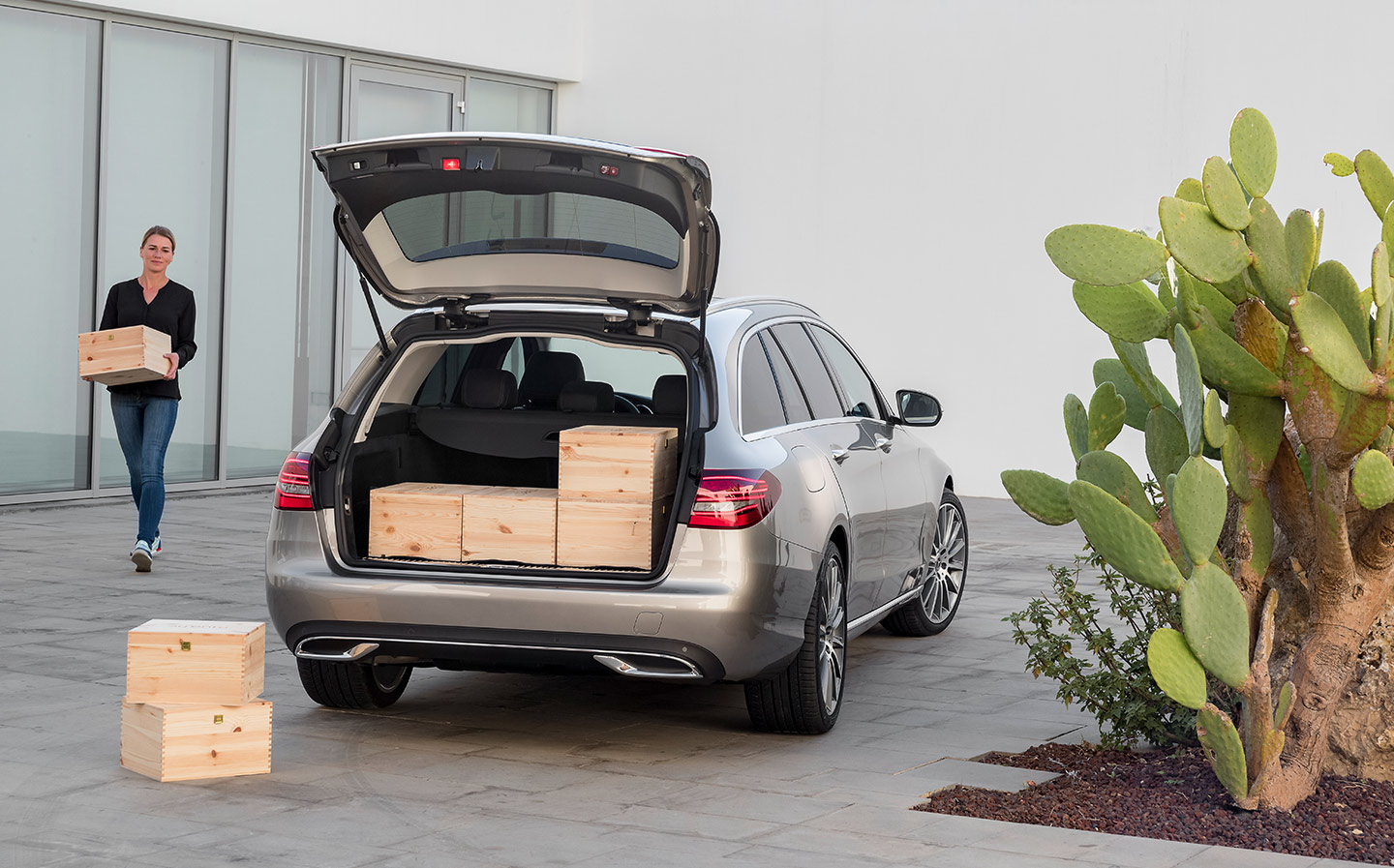 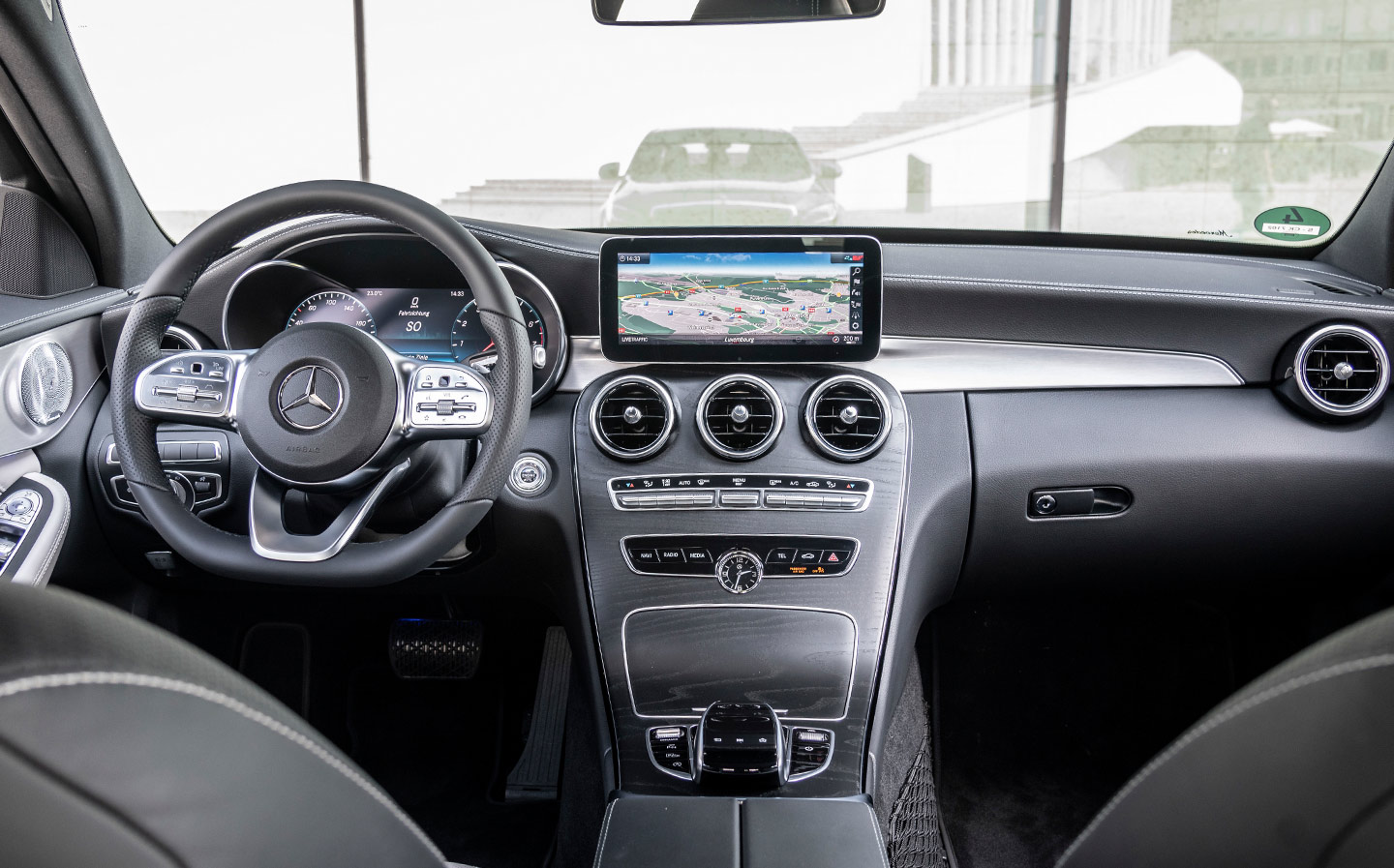 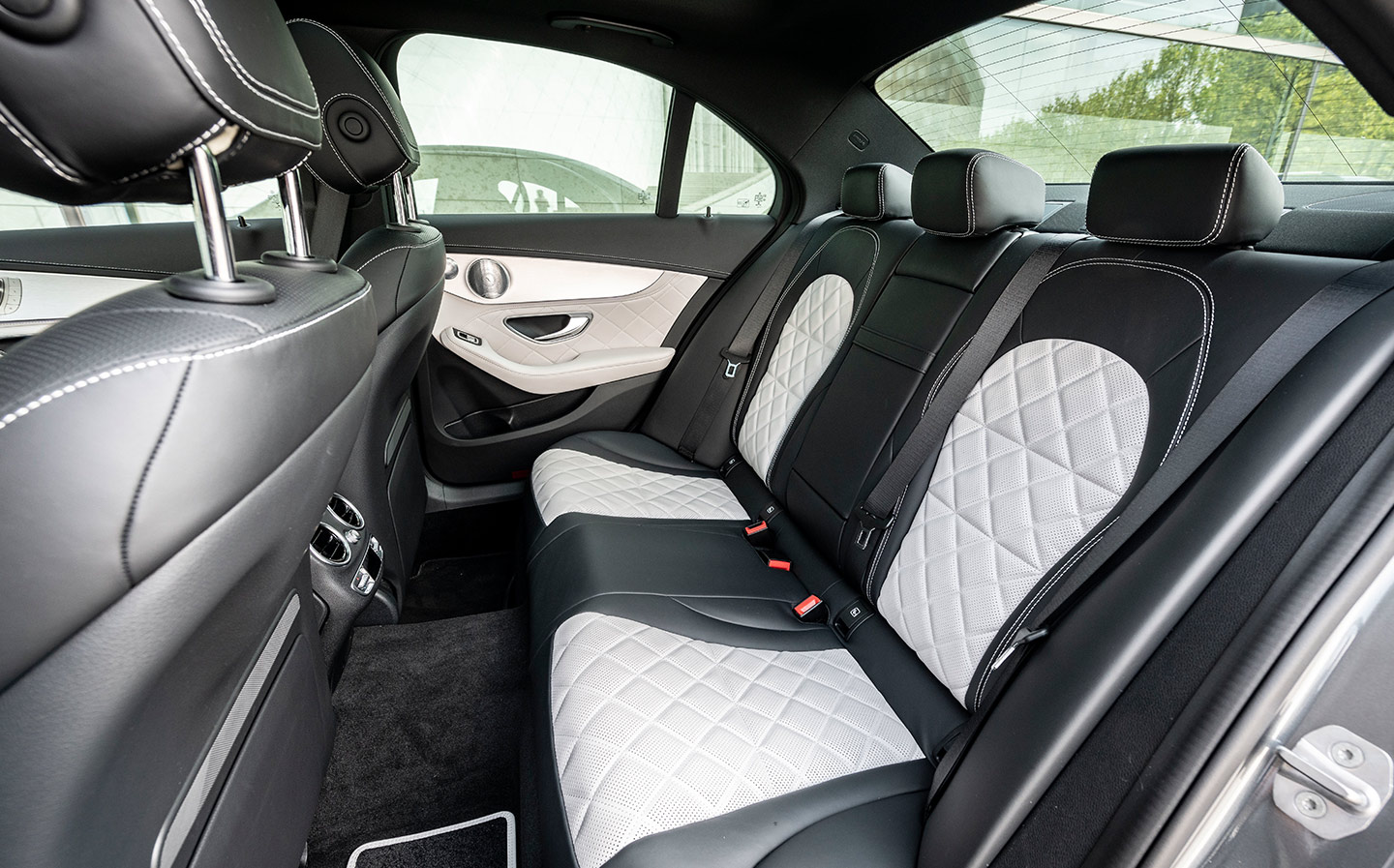 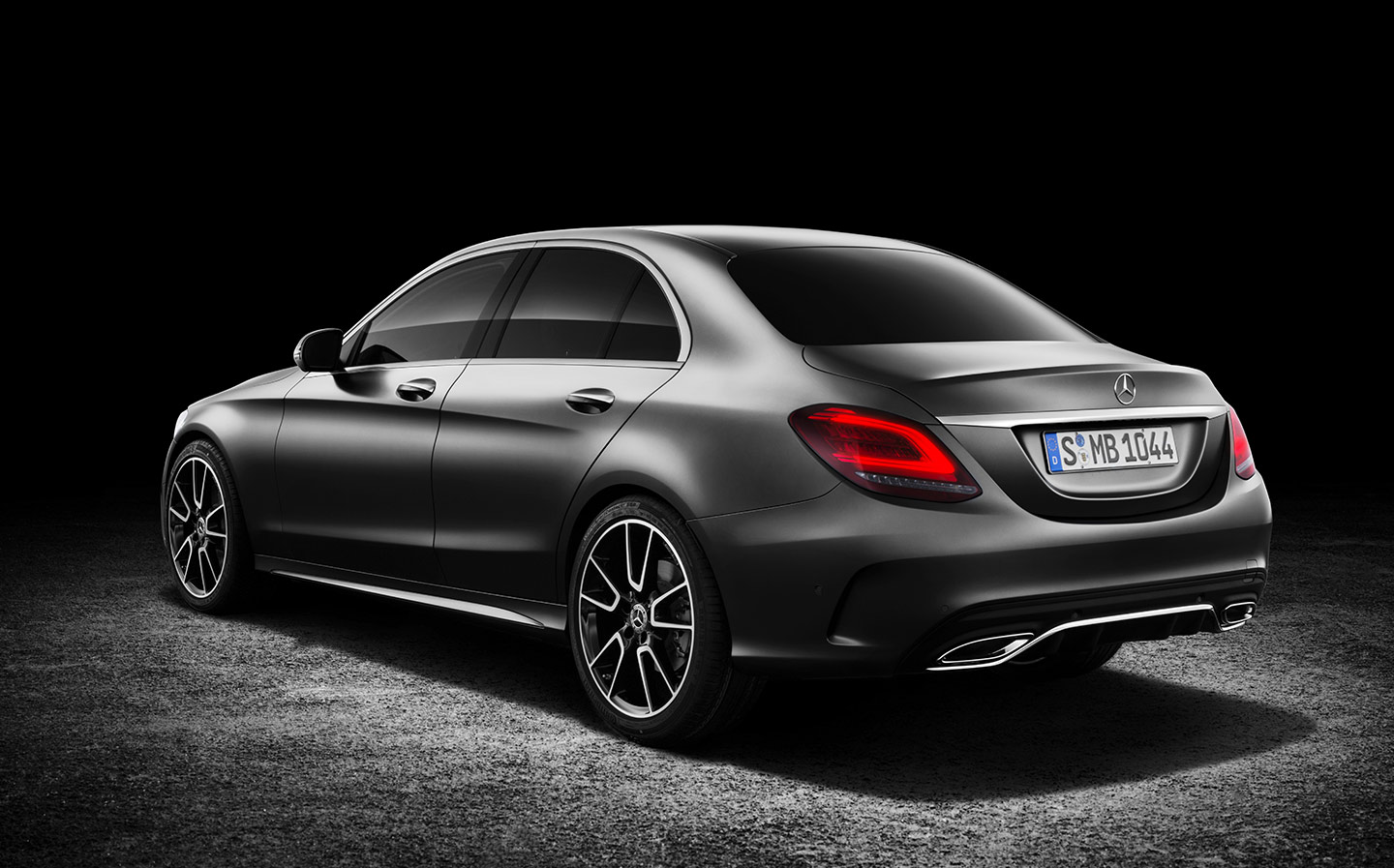 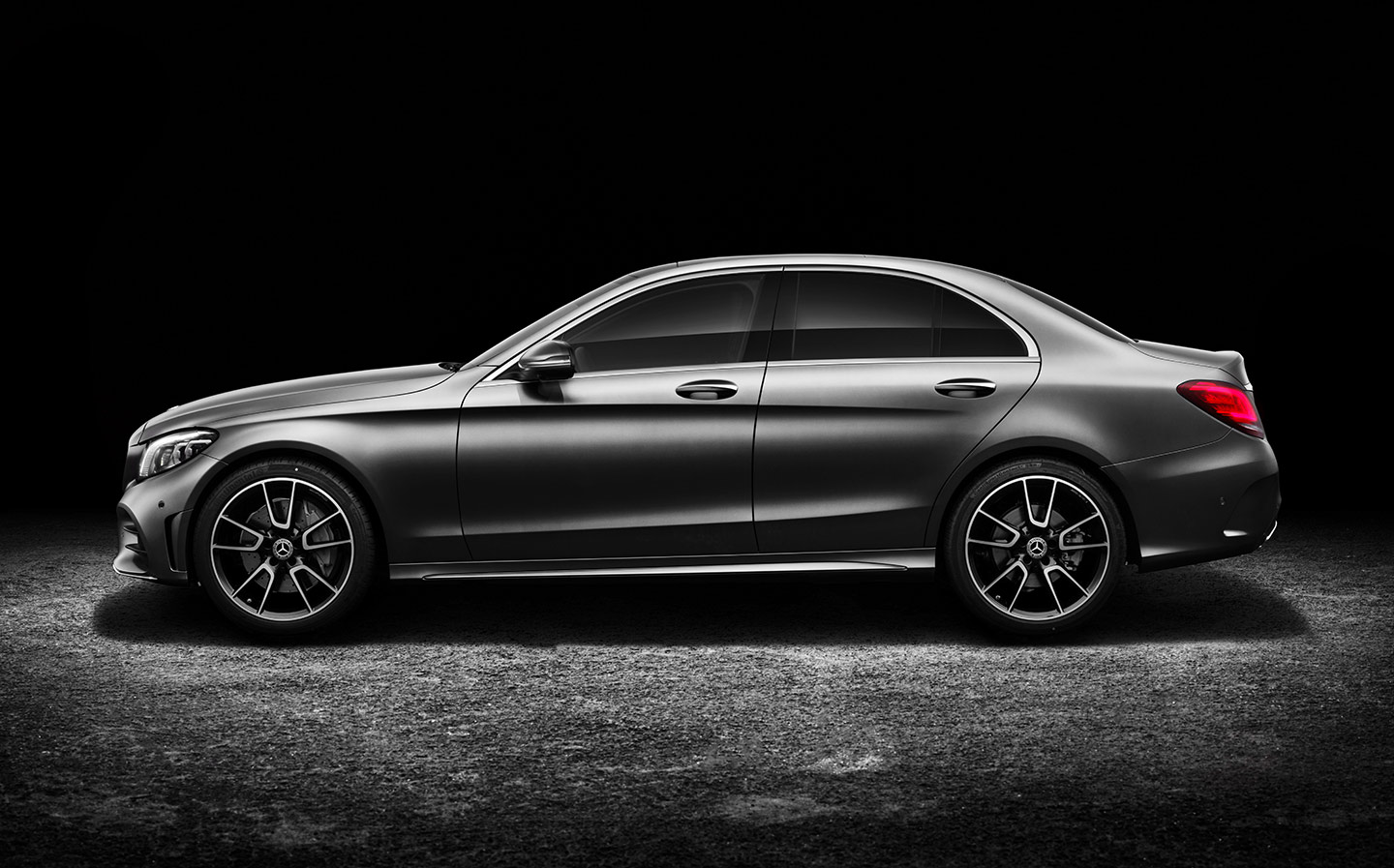 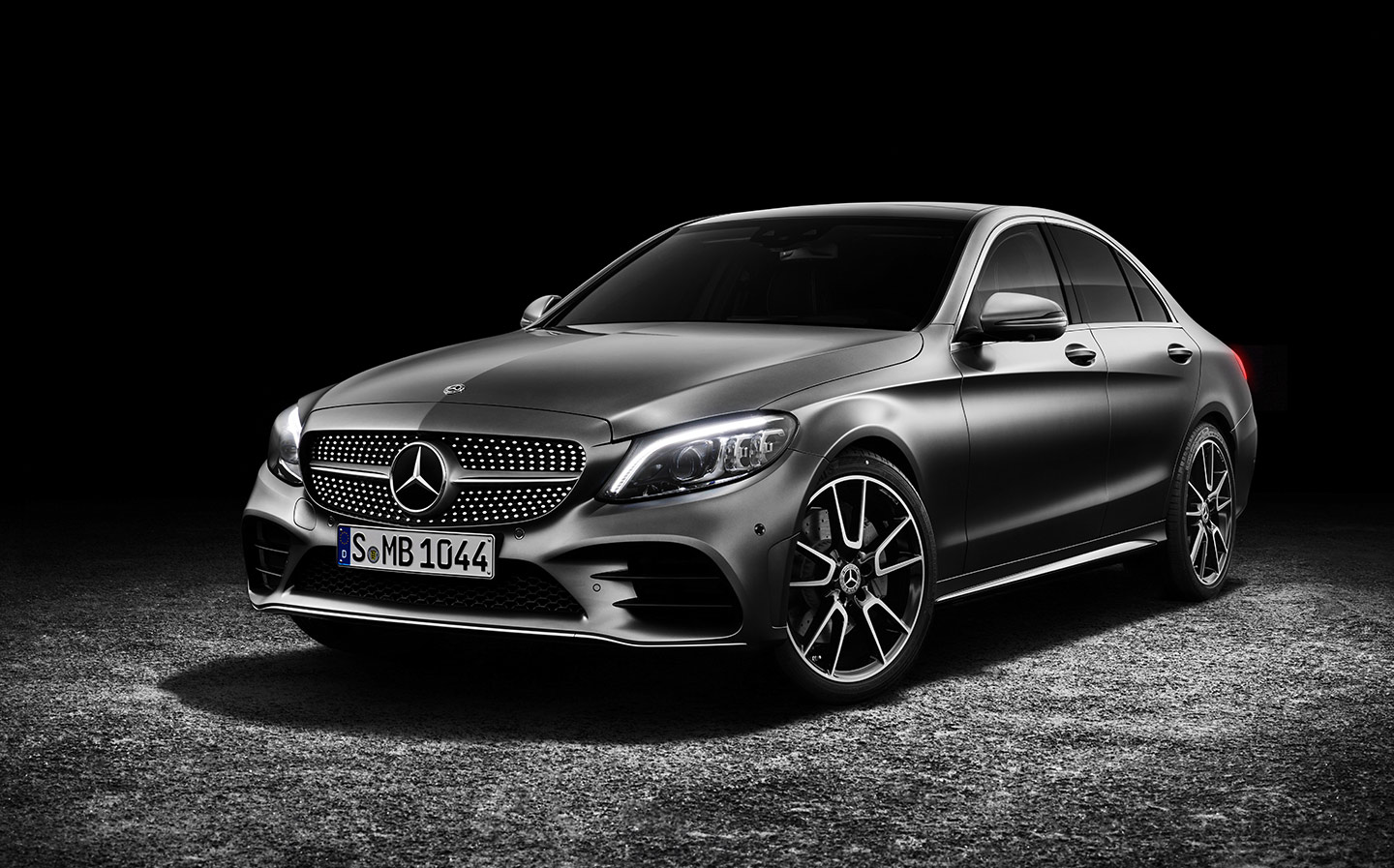 IT APPEARS that British motorists can’t get enough of the current Mercedes-Benz C-class. At time of writing it’s the 10th best-selling car of all in the UK, which is no mean feat for a high-end executive saloon and estate car in a market dominated by more affordable hatchbacks and SUVs.

With such a winning formula on its hands, Mercedes-Benz understandably didn’t change much during the model’s recent mid-life facelift. Bar a few styling changes inside and out, and a pair of new engines, it’s mostly the same car that was introduced in 2014.

The C-class’s interior is far more interesting to behold than the likes of the sporty BMW 3-series or the smart-and-sensible Audi A4. Whichever version you pick, you’ll be treated to expensive-feeling brushed aluminium trim on the doors and solid metal switches for the climate control features.

Unfortunately, the standard C-class’s infotainment system can’t quite cash the cheques written by its eye-catching cabin. The free-standing 10.25in screen above the centre console looks far better than the old car’s rather weedy 8.4in unit, but it still feels like a bit of an afterthought.

If you go for an AMG C43 model – or you’re happy to pay extra for the £2,795 Premium Equipment Line pack on lesser models – you get a super-slick 12.3-inch digital driver’s display instead of the standard car’s analogue dials. This screen doesn’t just look fantastic, you can configure it to show a combination of futuristic dials, media playback information and sat-nav directions using the neat touchpads on the steering wheel.

Apple CarPlay and Android Auto smartphone mirroring also come as part of this pack, so you can use your phone’s built-in navigation and music-streaming apps through the Mercedes’ infotainment screen.

The C-class is a top dog for interior space and comfort up front but things don’t feel quite as roomy in the back seats. While there’s a decent amount of leg room, anyone much over six-foot tall will find the top of their head brushing against the roof, especially if you pick a model with panoramic glass.

The saloon’s boot can swallow quite a lot of luggage, though getting larger items in and out is made tricky by the relative small aperture. The C-class Estate’s boot is more practical, of course — easily large enough to carry a couple of large suitcases with space to spare — although you’ll find that it’s a smidge smaller on paper than a 3-series Touring or Audi A4 Avant.

Out on the road you find the ride is a comfortable as the furnishings, with bumpy surfaces smoothed out better than the likes of the BMW 3-series and Jaguar XE cars, even without the C-class’s fancy optional air suspension. You won’t hear much unpleasant wind and tyre noise, either, which helps make long motorway journeys as relaxing as possible.

You’ll want to pick a C220d model if you regularly do lots of long drives. It’s impressively quiet, more than quick enough to keep up with fast-lane traffic and won’t cost much to run, either.

If you fancy something a bit faster, you can choose from C300 and AMG-tuned C 43 versions that’ll sprint from 0-62mph in as little as 4.7 seconds.

If inner-city driving is more your thing, there’s also a C200 petrol that uses a built-in electric motor to boost performance and fuel economy.

The light steering means the C-class is pretty easy to manoeuvre in town, too, and you get a reversing camera as standard to help make it as simple as possible to park. Unfortunately, the fairly narrow rear window of the saloon means visibility behind isn’t its strong suit.

Click for the latest Mercedes-Benz C-class deals on carwow

Or, for a more affordable option try the: