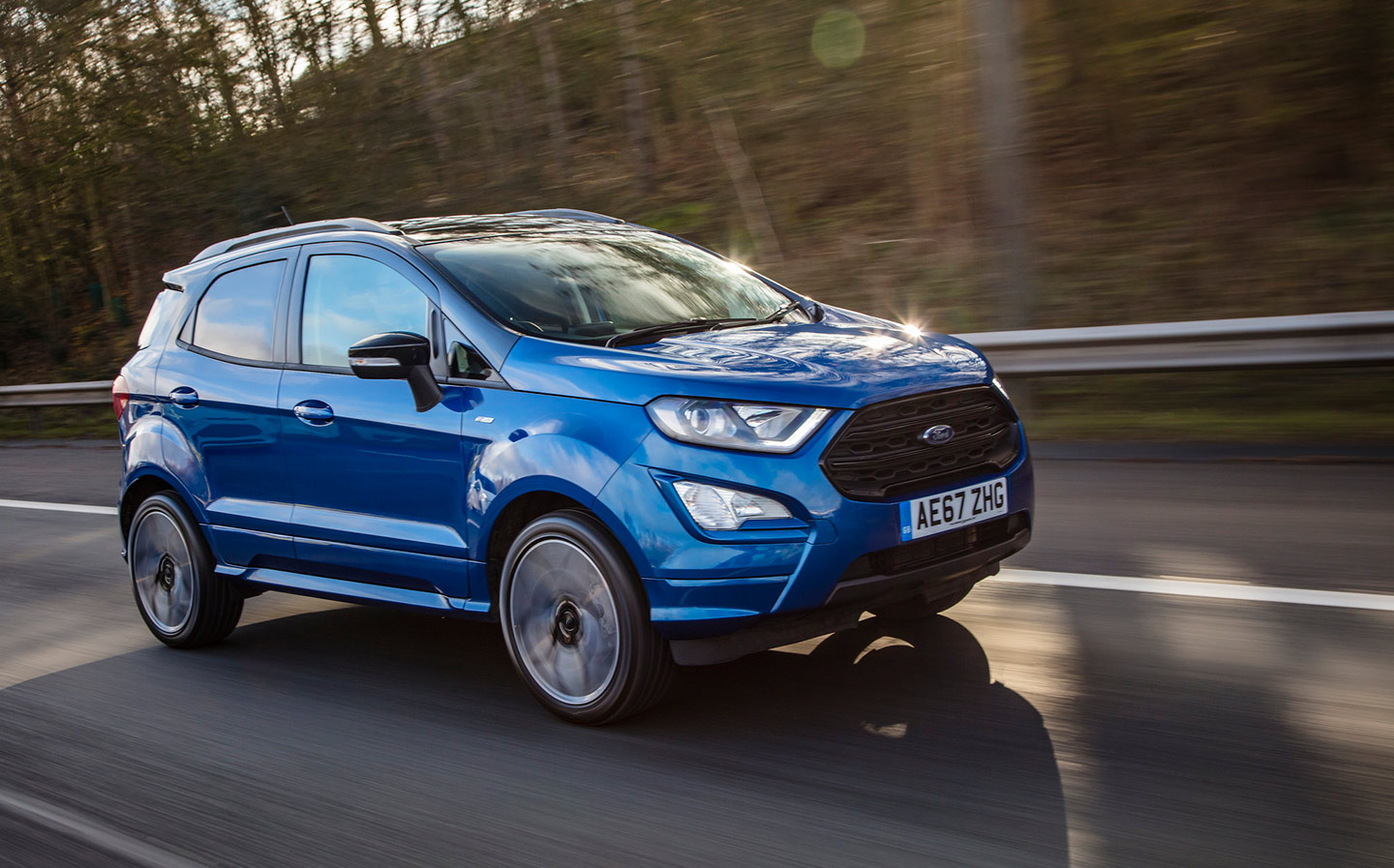 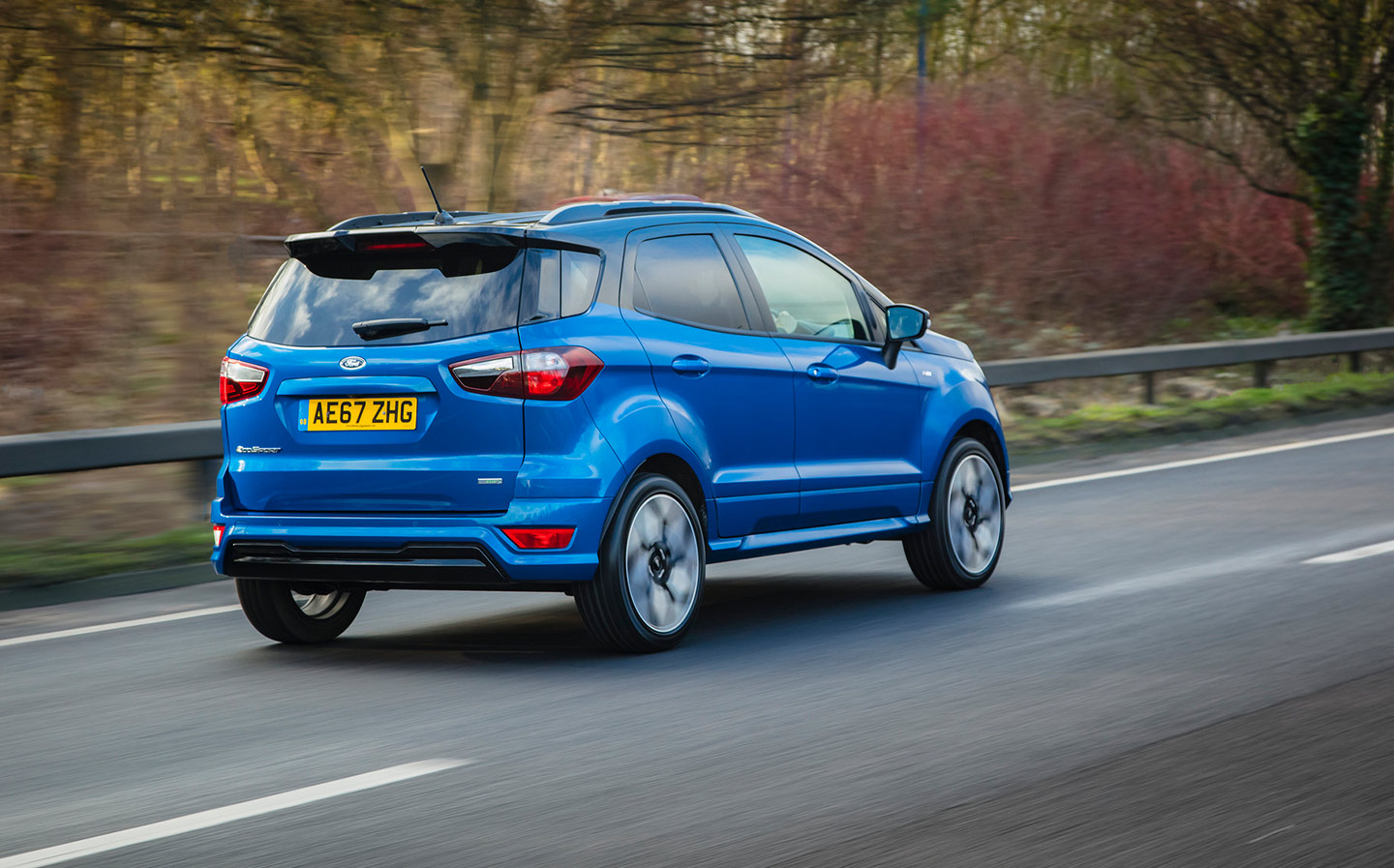 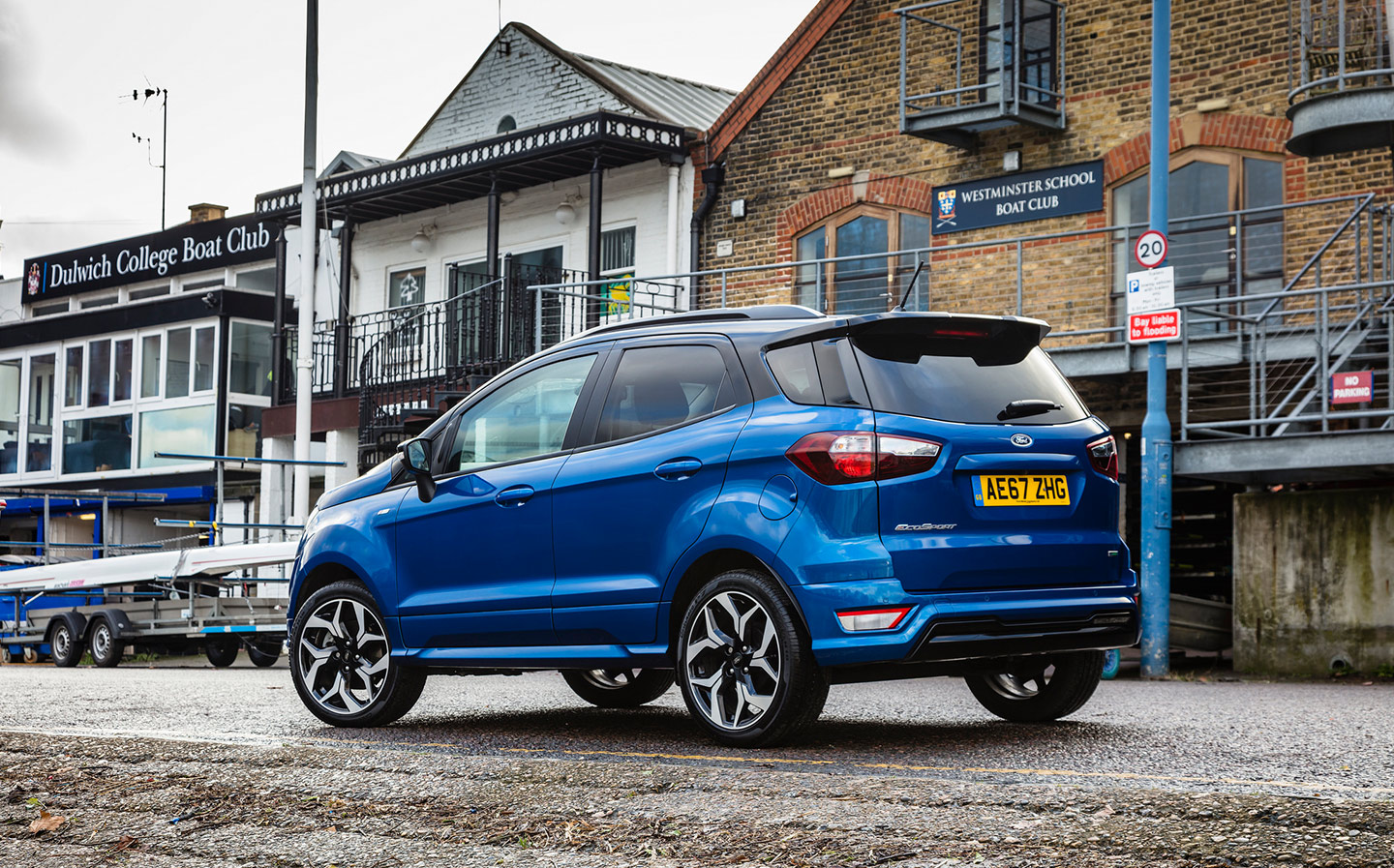 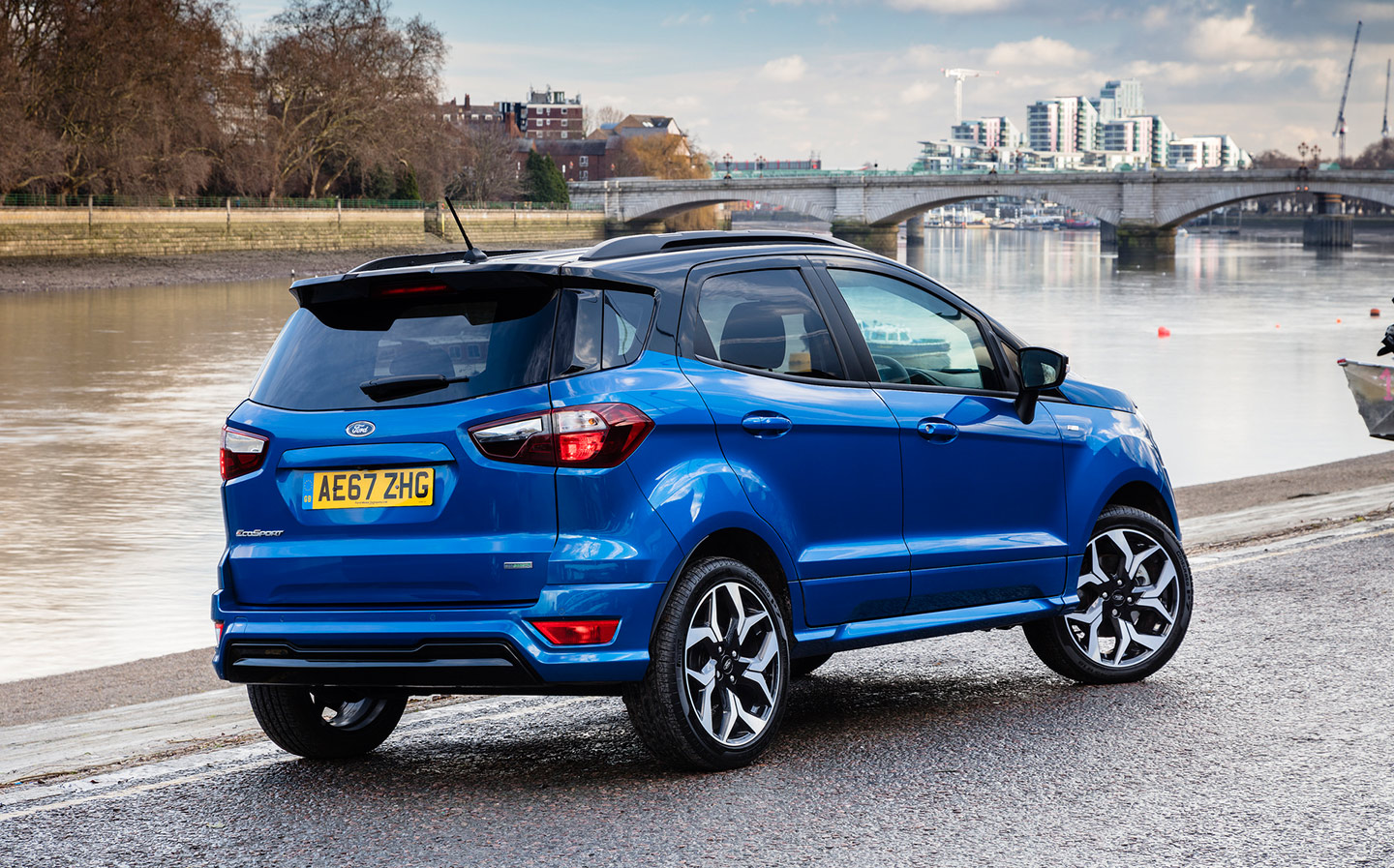 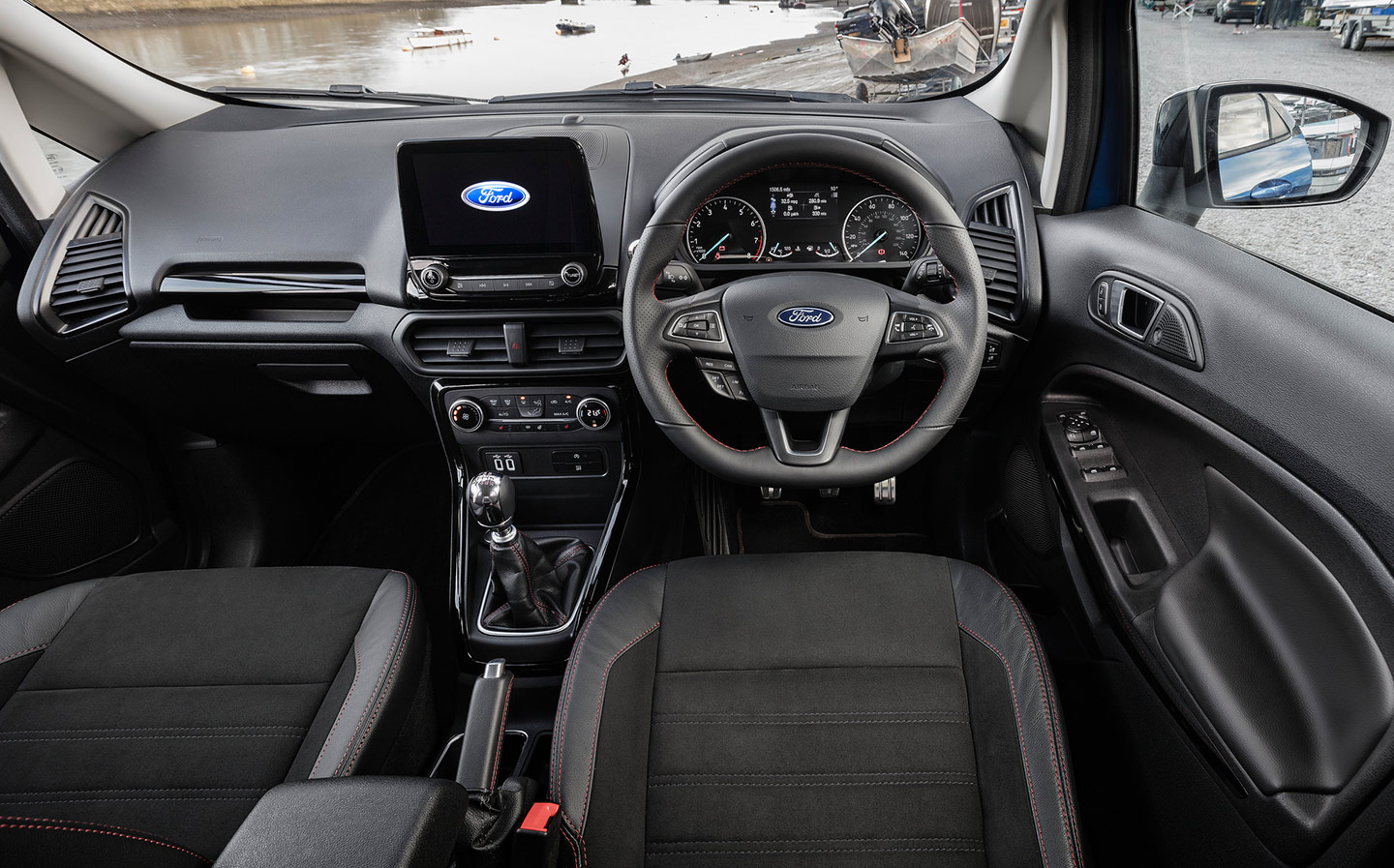 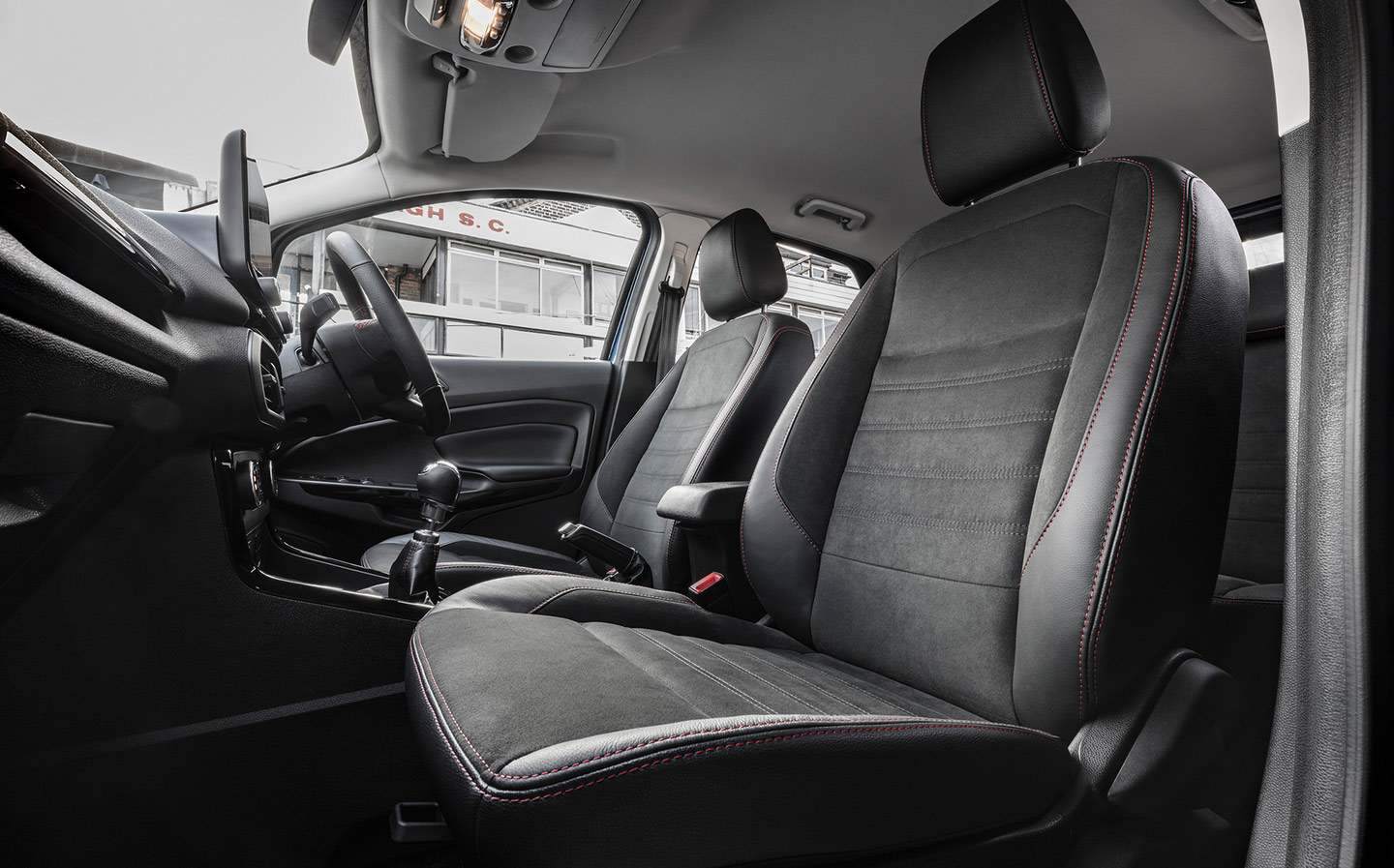 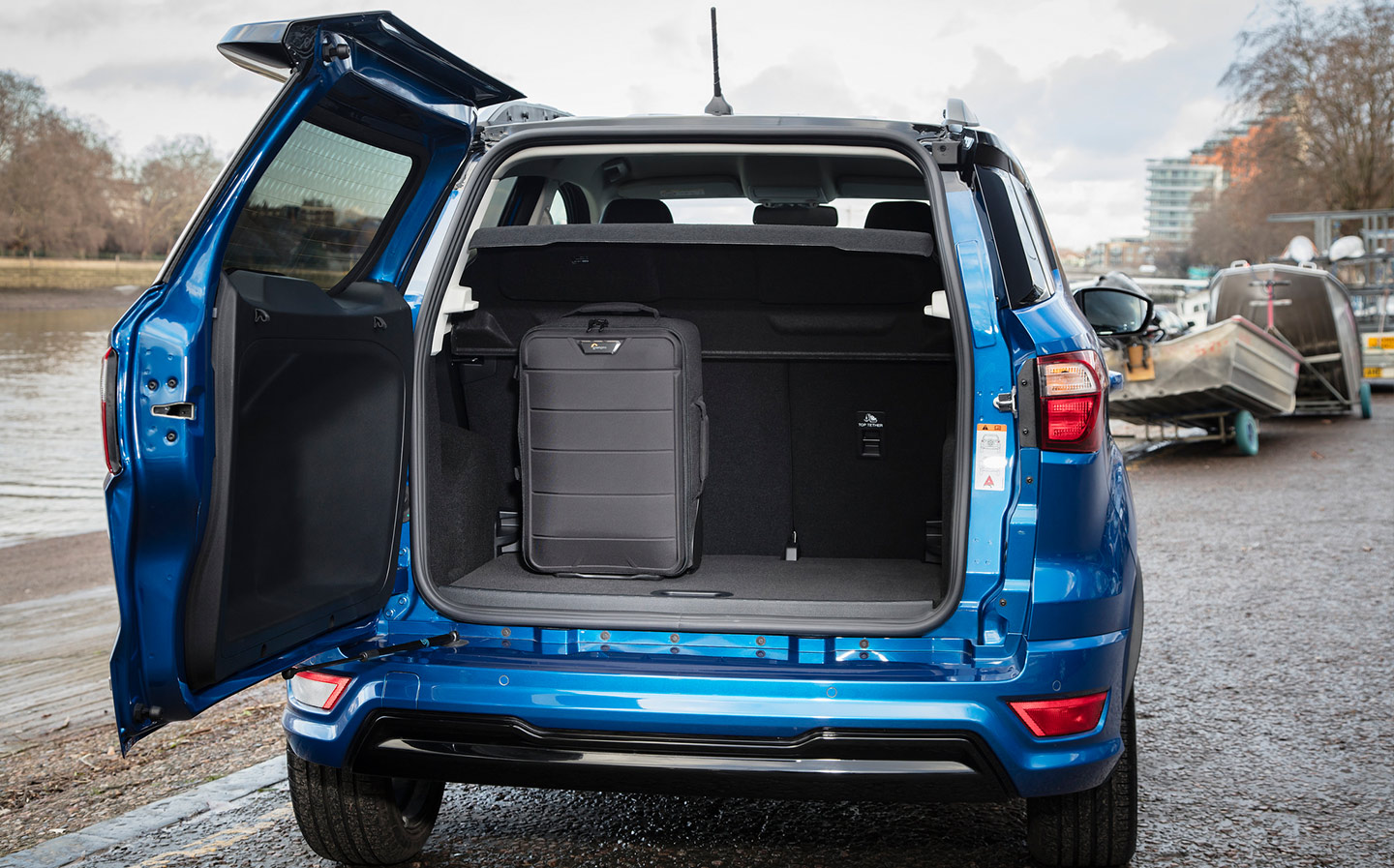 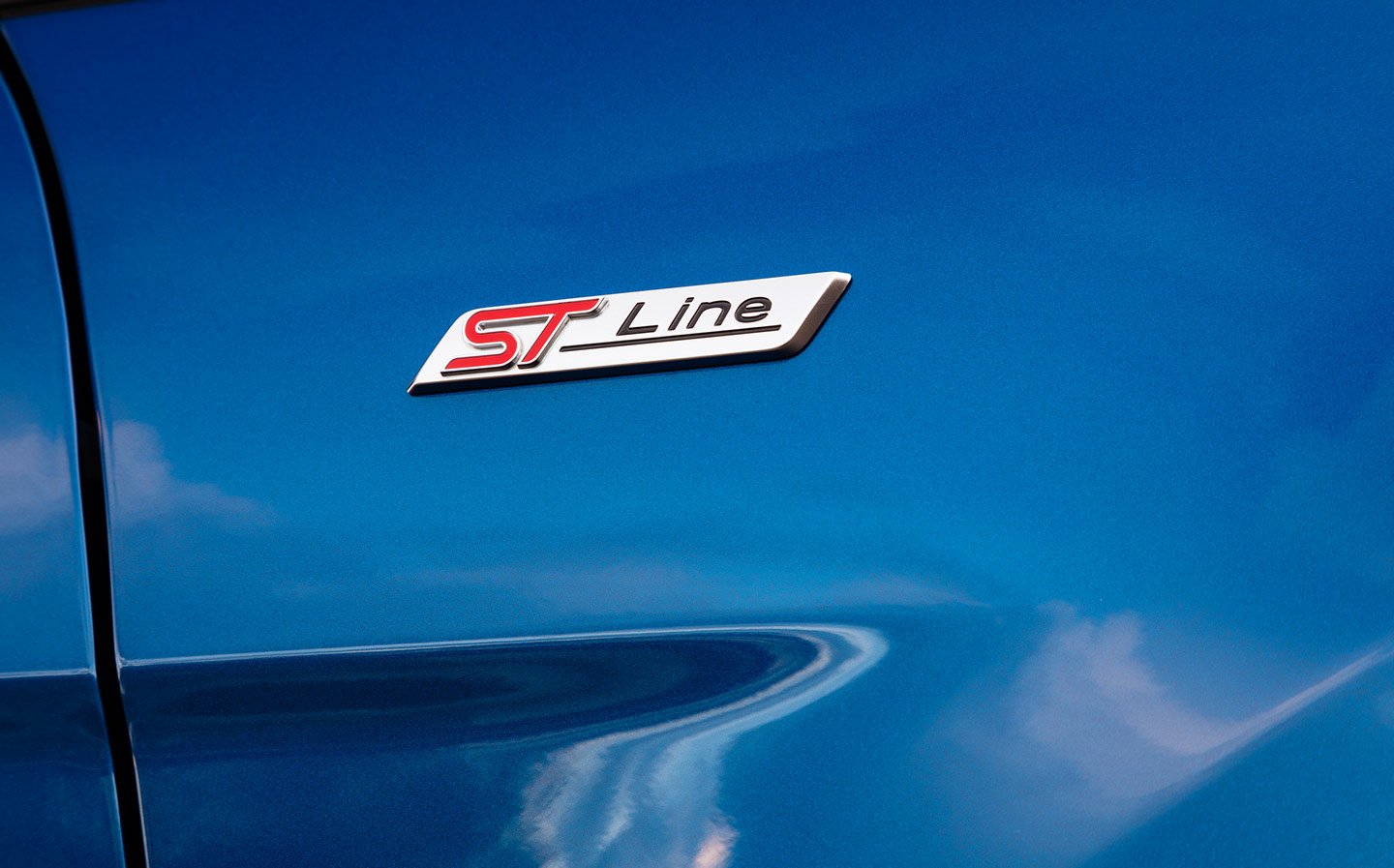 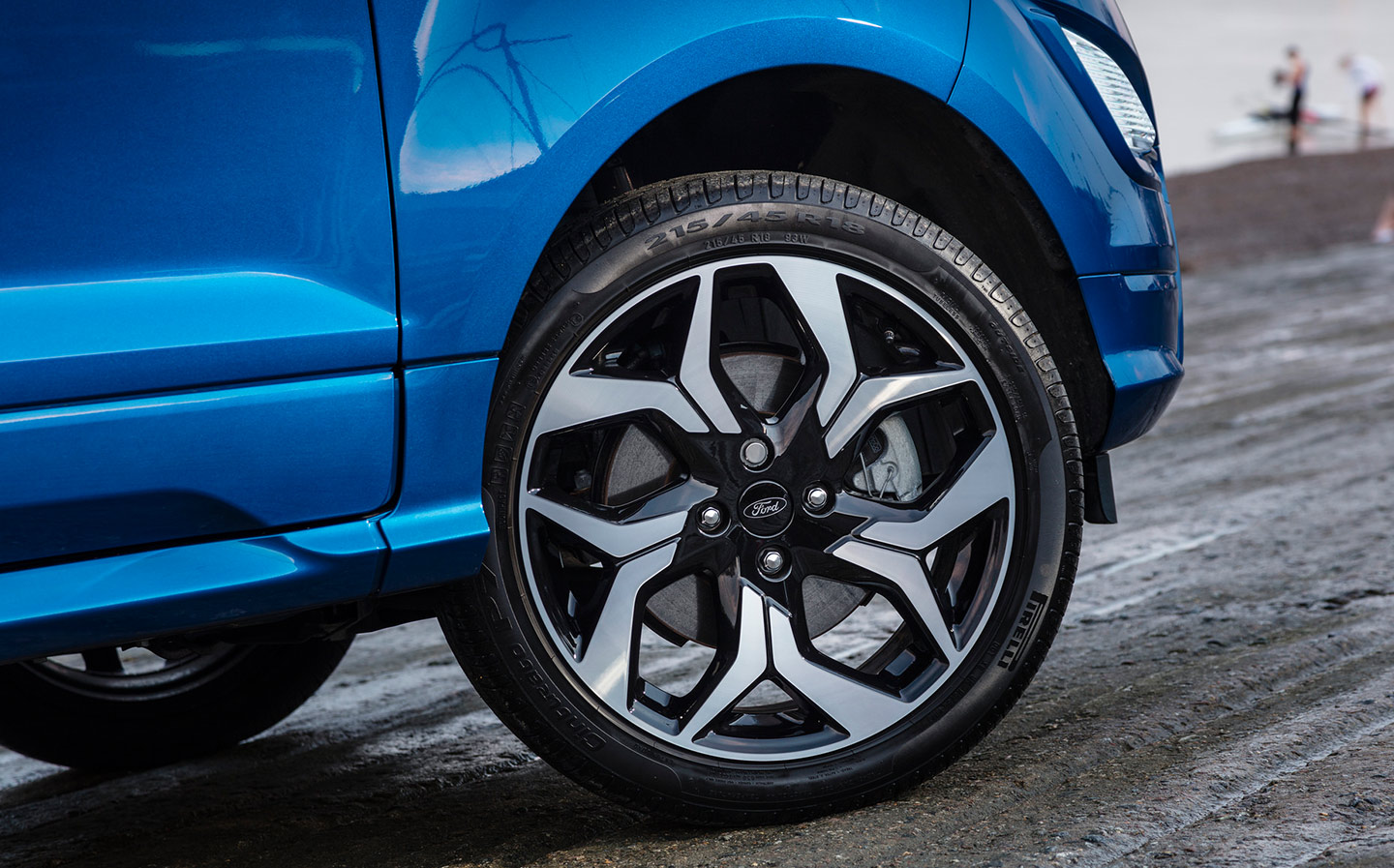 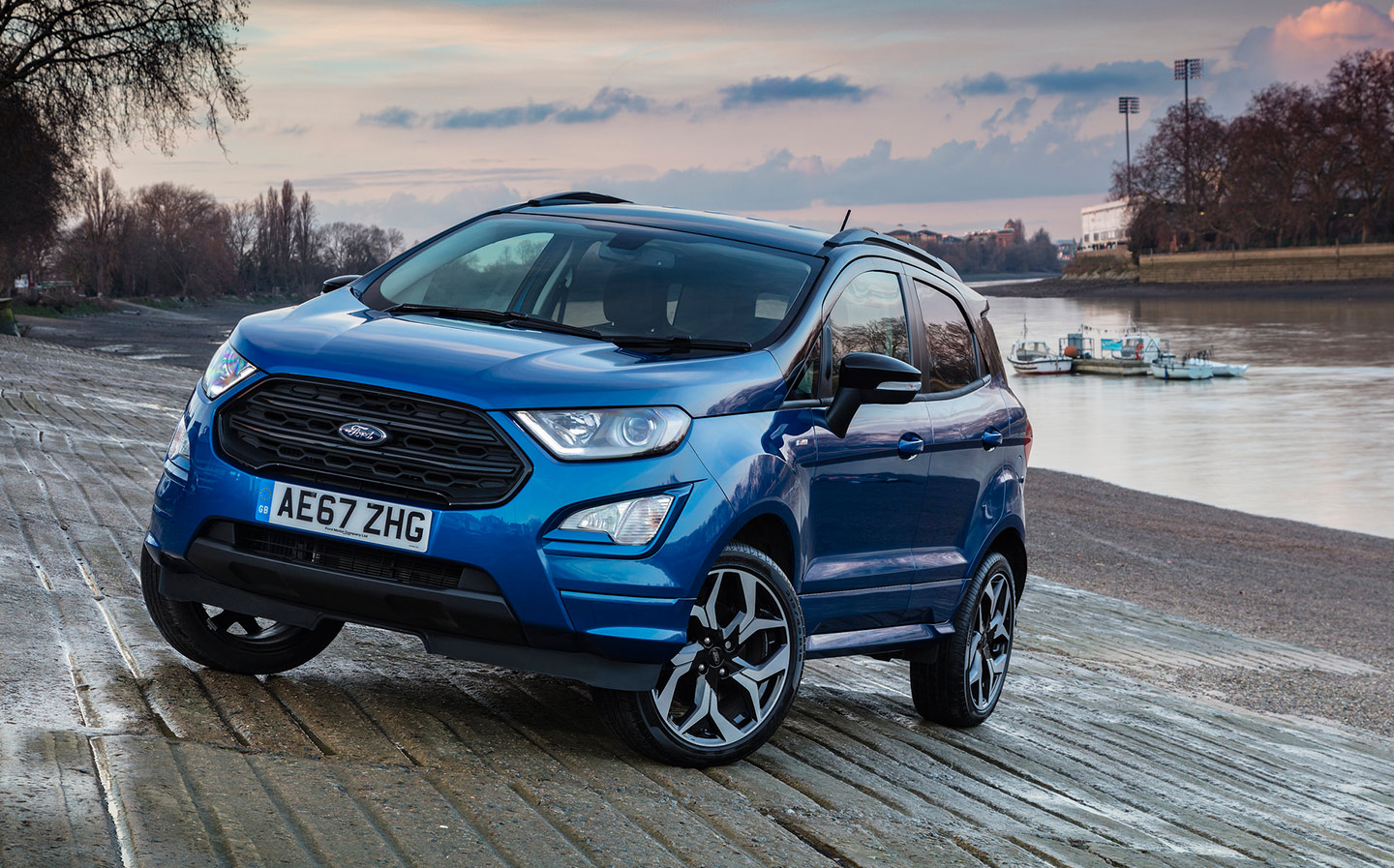 YOU KNOW those vertically-challenged men at the gym, with tiny legs but hulk-like biceps? That’s the Ford EcoSport.

Not because it’s lacking in the height department; far from it, in fact — this second-generation EcoSport is jacked up to the max, as one of those weight-lifting enthusiasts might say (but then again, might not). It has up to 19cm of ground clearance, an astounding wading depth of 550mm (the famously tiny-but-tough Suzuki Jimny 4×4 can only wade through 320mm of water) and towers a full 11cm over the Seat Arona, a class-leading rival.

But the EcoSport is stunted in the length department, being just a fraction longer than the Fiesta supermini on which it’s based. With those lofty and ford-crossing credentials but tiny footprint, on paper it has the potential to be a great car for town and country, offering a commanding view of the road in a package that’s easy to park.

But, with high sides and short wheelbase, you’d be forgiven for assuming it’s a bit of a dog’s dinner, both to drive and and aesthetically. Surprisingly, that’s way off the mark.

Let’s start with the way it looks. Yes, it does have odd proportions but the post-2014 EcoSport is by no means an ugly car, and the refreshed-for-2018 version is rather good-looking, especially in the ST-Line trim with optional 18in wheels and Tiger Eye (bright gold) paint, which is what was delivered to us for review.

It managed to pull off tough and stylish at the same time, helped in no small part by the fact that Ford dropped the much-maligned spare wheel on the rear tailgate when it launched the second-gen car.

The good news continues inside, with a greatly improved interior for 2018, with all versions getting an 8in touchscreen that helps free up clutter. The overall look of the dashboard is grown-up but stylish, with chrome accents here and there and leather trim on the steering wheel and handbrake. Overall build quality is a cut above most rivals, too — we’d go as far as to say Ford has reached VW levels in this regard.

Standard tech levels are impressive, too. All cars get air conditioning, an air-conditioned glovebox, electric windows front and back, DAB radio and Ford’s SYNC smartphone connectivity, as well as the ability to run Android Auto / Apple Carplay via your phone, including navigation from Google, Waze and others. And Ford’s deal with Bang & Olufsen means that, if you go for a Titanium or ST-Line model and fork out the extra £350, you will have one of the finest sound systems on any car. Seriously.

The way it drives also impresses, with a good weight to the steering and keen handling, given its high-riding stance. We had the all-wheel drive version (only available with the 1.5-litre diesel engine), which proved grippy in damp, autumnal conditions with leaves littering the roads, but we thought better of giving it a serious off-road challenge — despite the wading credentials, the EcoSport isn’t really meant to be a hardcore 4×4.

But if you’re hoping for the sublime ride quality of the Fiesta, you’ll be disappointed; the reworked suspension is much firmer, to reduce body roll, which means the EcoSport has a harsher ride and is nowhere near as good at absorbing the bumps and potholes of Britain’s broken roads. It’s not terrible, though, and the larger alloys with “painted on” tyres fitted to our test car won’t have helped with shock absorption — we’d recommend going for the standard 16in wheels, or the ST-Line’s regular 17s.

We had the latter, which offers decent thrust and surprisingly free-revving refinement for an oil burner, but coupled to the 4×4 transmission and 18in wheels, the official fuel economy figure drops from 60.1mpg to 52.3mpg (actually, it was more like 44mpg for us, in the real world) and CO2 leaps from 123g/km to 140g/km — a rise only the tax man can love.

The sweet spot is probably the front-wheel-drive 125PS petrol, which promises over 50mpg and up to 125g/km of CO2. This engine is also the only one that can be mated to an automatic gearbox, but avoid that if possible as, again, economy and emissions suffer considerably.

Any real problems with EcoSport? Well, there’s the interior space; fine up front but don’t expect any more room in the rear seats than you’d find in a Fiesta.

The boot isn’t huge either, holding 356 litres of luggage up to the parcel shelf, but its square opening makes it a much more useful load lugger, especially when you fold down the rear seats to make use of the full 1,238 litres.

Getting things in and out isn’t always easy, though, because while the tailgate has lost the spare wheel from the first generation EcoSport, it still opens from the right side like a door, rather than up like a standard hatchback. That means that if you park with the rear of the car too close to a wall or another parked car, you can’t open it fully. It’s a bizarre bit of design that suggests Ford is more concerned with hanging on to a quirky sales gimmick than making life easier for customers.

You might be able to forgive the EcoSport its irritations, though, as there’s enough good stuff going on to make it worth a look for anyone in the market for a small crossover. It’s a tough and expanding market, and rivals like the Seat Arona and Volkswagen T-Roc are arguably all-round better propositions, but Ford has caught up with VW on style and quality. If you’re a Fiesta driver and want something almost as short but more hulking up top, this is a fine choice.