BIG, LUXURIOUS sports cars are a dying breed. Even manufacturers for whom these grand tourers were a staple for many years are finding more buyers with luxury SUVs. For example, Porsche’s best-selling car is the Macan SUV. So, should you be excited about the imminent arrival of a through-and-through GT car like the new BMW 8-series?

We’re driving a pre-production version but we’re told it’s very close to the final production model, with only a little fine-tuning to do on the suspension setup before it goes on sale.

The first impressions are good. Even in its camouflage you can tell its vast bonnet, slinky roofline and exaggerated air intakes and grilles —all inspired by the Concept 8-series from 2017 — will make it as eye-catching as anything on the road.

The 8-series’ cabin looks pretty special, too. Its basic design is sportier than the 7-series limo’s, with a widescreen infotainment display and high-resolution digital instruments for the driver.

However, rather than mimic analogue dials, as the 7-series does, the 8-series gets vertical speed and rev-counter readouts that look like glowing altimeters from some kind of fighter jet.

Thankfully, the supportive leather sports seats are more comfortable than your average ejector seat and hold you securely in place when cornering hard – something you’ll want to do as much as possible in a car that’s surprisingly sporty for a GT car.

The M850i we drove comes with a 4.4-litre twin-turbo V8 and it’s perfectly happy to cruise along at motorway speeds, but it comes alive on tighter country roads. You get maximum thrust from the M5-derived engine from just 1,800rpm, and the 8 Series can blast from 30mph to 60mph at a rate that’d make some supercars blush.

The standard eight-speed automatic gearbox is one of the best in the business, too – shifting quickly and smoothly, no matter which of the driving modes you choose. Stick it in Sport and it’ll even sense when you’re entering a corner and prime the gearbox to deliver lighting-fast downshifts as soon as you hit the brakes. 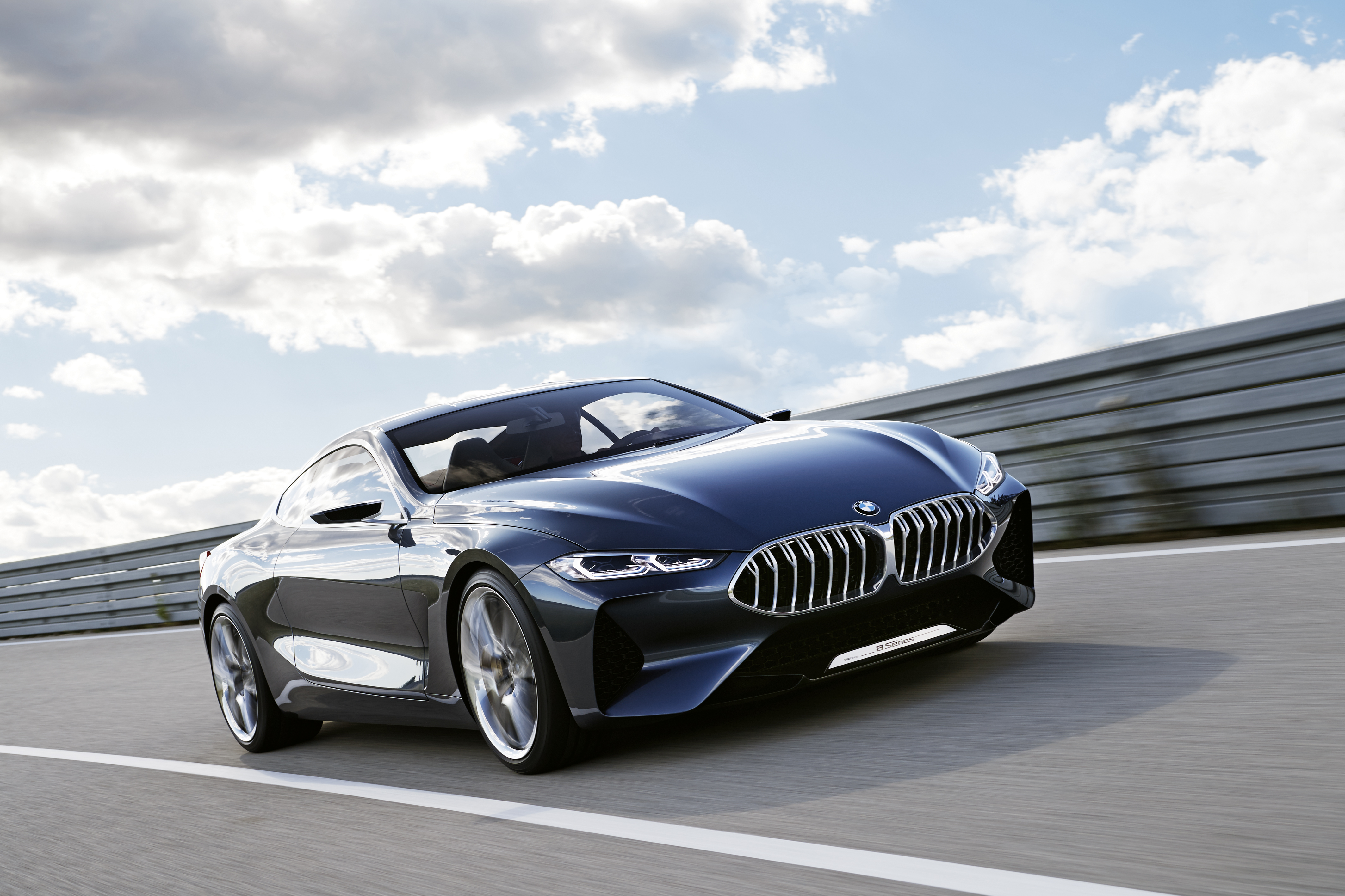 Under the camouflage, the 8-series looks similar to the BMW Concept 8 Series, which made its debut at the Beijing motor show

Go one step further into Sport+ mode and the standard adaptive suspension becomes firmer to make the four-wheel-drive M850i as grippy as possible. You can even get the car with an active anti-roll system that uses electric motors to physically lean the car as soon as you turn the steering wheel into a corner to eliminate almost all body roll.

The steering itself is reassuringly weighty and precise in the Sport driving modes, and lighter in Comfort, which is ideal for when you want to settle into a long-distance cruise. You’ll hear barely any wind noise at motorway speeds, either, and the BMW’s adaptive suspension does a great job of softening the vibrations from uneven road surfaces.

The 8 Series isn’t perfect, however. The two back seats are only really big enough for children and its large size and small windows make manoeuvring around town pretty stressful.

That said, you’d have similar issues threading a giant SUV through tight city streets, and you certainly wouldn’t have as much fun once the junctions and traffic jams open out onto an empty B road.

Or, for a more affordable alternative, check out the Ford Mustang.