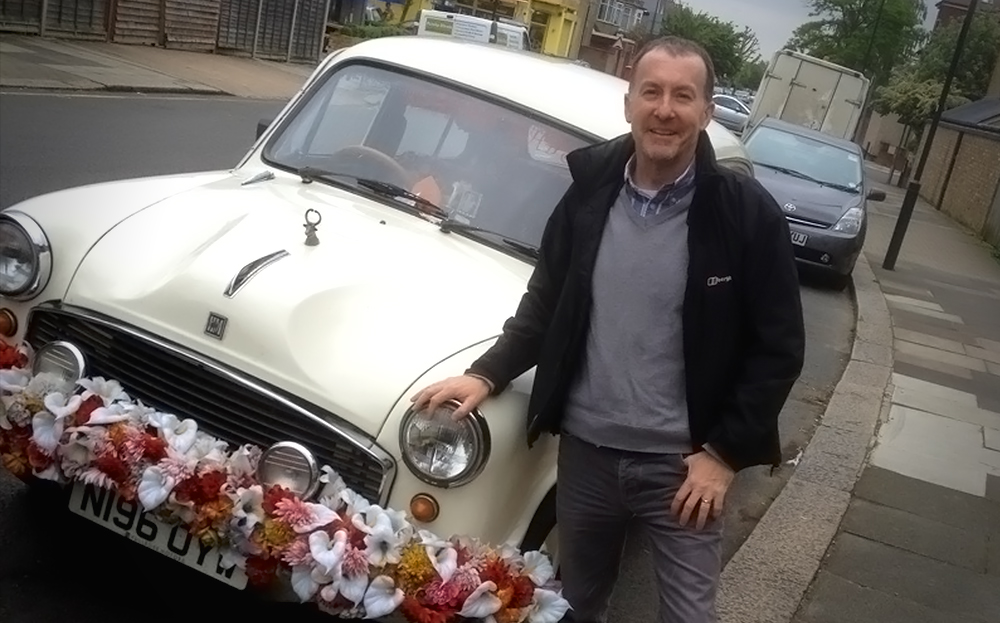 IT’S NOT hard to spot the Hindustan Ambassador among the parked cars in Kensal Green. It’s the one with flowers draped on its bumpers. And, apart from the smart Victorian terraced houses lining the road, it’s about the oldest thing in view.

It belongs to Tobias Moss, proprietor (and driver) of Karma Kars, a business that runs it, and one other, for weddings and promotional events.  But I’m not here to get married. Instead, I’m here to pay my respects because Hindustan Motors, the company that has built the “Amby” in India since 1957, has suspended production of this legendary vehicle.

Falling demand, rising competition and India’s flagging economy have put paid to a car that is entwined with India’s life and culture. In reality, it is a Morris Oxford, the popular family saloon that ran from 1956-1959.

In 1957, BMC, which owned Morris, exported the Oxford’s tooling to India. At that time, car imports were prohibitively expensive in India and the roomy, sophisticated Ambassador, as the former Morris Oxford was renamed, quickly caught on in a market devoid of serious competition. In its heyday it accounted for 70% of India’s new car market.

As a result, there are few Indian people who have never travelled in an Amby, whether their own or a taxi (in one city alone ‒Kolkata, in West Bengal ‒ there are more than 33,000 Ambassador taxis). It was regarded as the ultimate status symbol by government ministers and senior diplomats who were driven in them.

But the Ambassador’s crown began to slip when, first, Maruti Suzuki began building low-cost hatchbacks in the 1990s and second, when terror attacks by militants exposed the ancient Amby’s vulnerability. Government ministers deserted the car in favour of tougher and newer SUVs.

Last week, Hindustan Motors called time on the venerable Ambassador. A statement read: “The suspension of work will enable the company to restrict mounting liabilities and bring in a situation conducive to the reopening of the plant.”

Open the door and all that carefully cultivated status is punctured by the most bizarre interior I’ve ever seen.  Karma Kars? Karma sutra is the look Tobias is going for here.

Which could leave the door open for the car to return from the grave, like so many creaking but easily repaired old Ambys have before. Ones like the example standing before me in, of all places, west London.

Moss bought his Amby 14 years ago from an estate agent in Hendon who had imported it from India. It’s the flowers (artificial, of course) that you notice first. They’re wrapped around the bumpers, a sort of karma crash protection system: “I smother you with love at point of impact; you leave no trace of damage on me.”

And then you notice what great condition it’s in. The cream paintwork on the body and wheels still looks fresh, and the chrome hubcaps are bright. There are no serious dents and no rust. 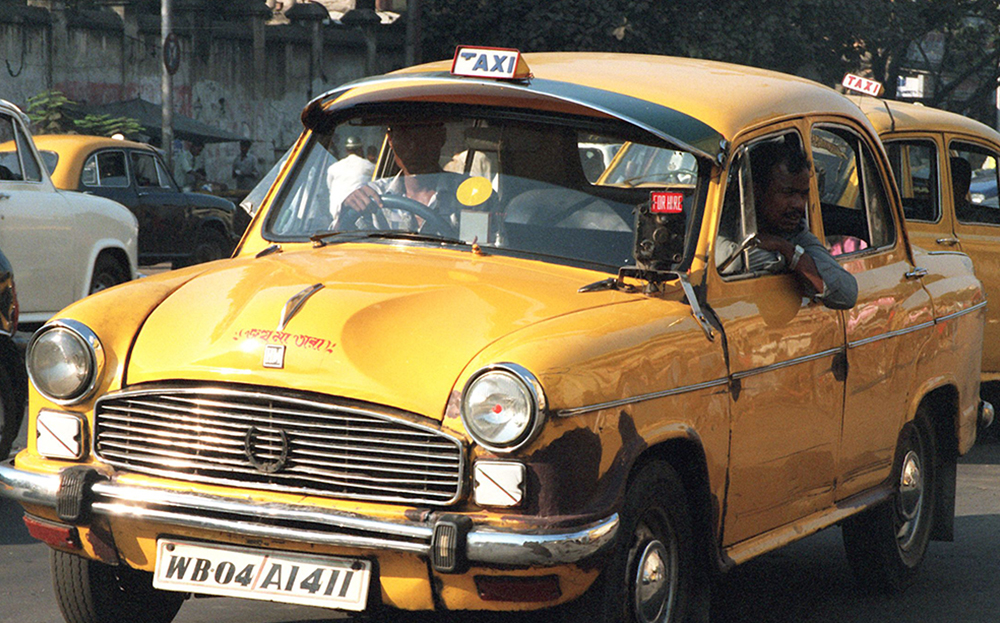 An Amby in India

Stand back and you can admire the simplicity of the design (it looks like the sort of simple three-box car every child draws) but look closer and you see the swage line rising from midway along the back door to the tail light, the miniature tail fins and the generously scalloped bonnet. They combine to give the Amby an air of distinction.

Open the door and all that carefully cultivated status is punctured by the most bizarre interior I’ve ever seen.  Karma Kars? Karma sutra is the look Tobias is going for here. The flowers that decorate the bumpers also decorate the gear lever. The seats and every available surface including the steering column are covered in floral fabric. The dashboard has tassels swinging from it. An incense stick burns, filling the cabin with a sickly scent. Vinyl wrap has nothing on Moss’s Ambassador.

“This is what people do with their Ambys,” says Moss. “They personalise them, often to excess.”

He hands me the keys and I settle behind the steering wheel. The first thing I notice is how loose the door seems when I close it. The frame shakes alarmingly and I can see daylight between it and the body. Let’s hope those karma bumpers work their magic.

The seat is properly comfy, like an old officers’ mess chair, which it probably is. I waggle the waggly gear lever to check the gearbox is in neutral, dip the light clutch to be safe and turn the key.

This Amby is the later model powered by the Isuzu 1.8-litre engine. It produces a claimed 75bhp and, if you’re feeling brave, is good for an indicated 85mph. With a judicious tug of the choke knob it springs into life before settling to an authentically loud tickover.

It’s then that I notice there’s no rubber on the accelerator pedal, leaving me to fish for the thin, metal arm that remains with my right foot while simultaneously dipping the clutch and selecting first gear.  The lever has a long throw but gear engagement is precise enough (thank the venerable and well-engineered Isuzu gearbox for that) and with a touch of gas we’re off. 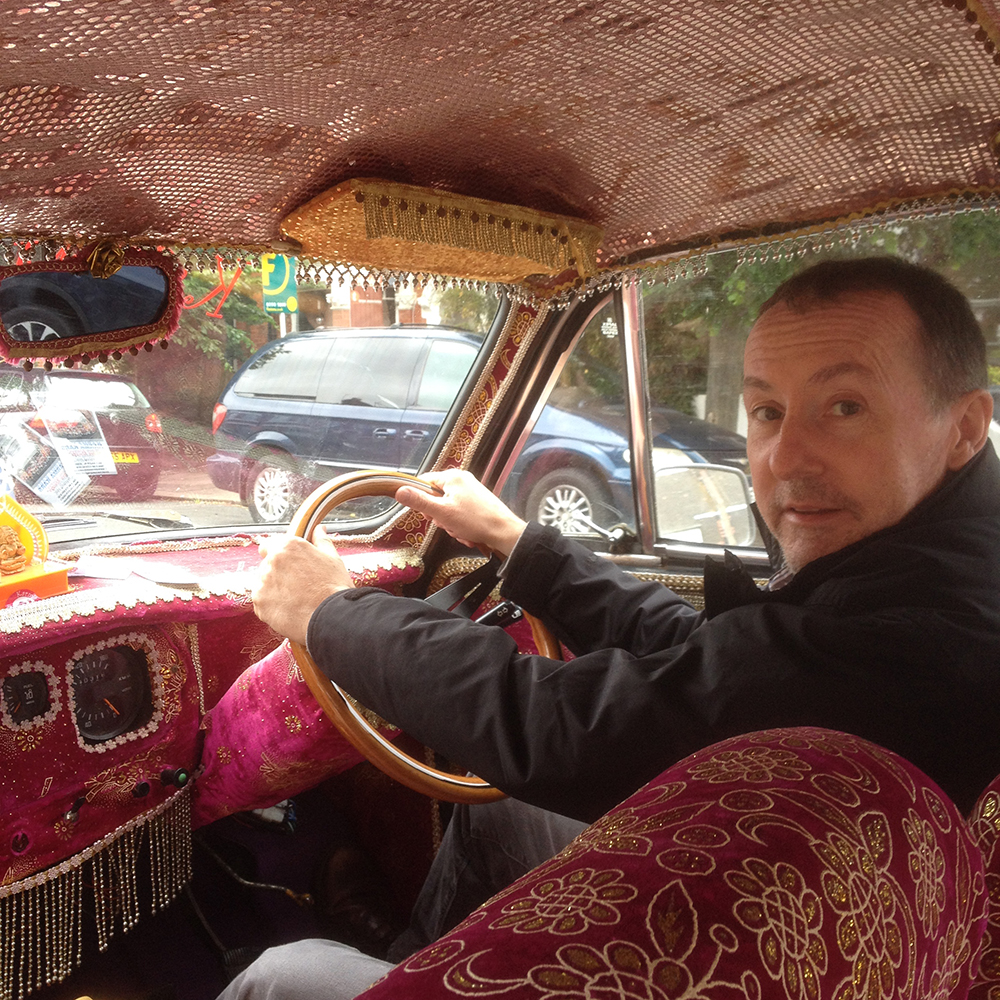 How did we manage without power steering? The Amby’s larger wooden steering wheel helps but even so, the unassisted steering requires good forward planning if you’re to avoid mounting kerbs and rearranging the bumper-flowers. It’s a rack and pinion system, though, so despite the generous lock, you do feel a sneaking connection with the car’s front wheels. Feeding the wheel through the hands, rather than blithely spinning it with one hand, is the only way to judge which way the front wheels are pointing.

A lorry that indicates it’s leaving the roundabout before continuing blindly on, forces me to test the Amby’s brakes (discs at the front, drums at the rear). They respond well, giving me a confidence that could get me into trouble.

Kate Moss, Sienna Miller, Elton John… Two weeks ago, Poppy Delevingne used it for her wedding. She loved it.

The car’s ride soon puts paid to that. The sleeping policemen of Kensal Green threaten to dislodge the flowers, if not the chassis. The car wallows and bounces over every hump in the road. Strangely, it’s a motion that suits the Amby’s karma sutra interior.

No question, the Ambassador is way past its sell-by-date. It lacks the poise and pointiness of a modern car. Its controls are sloppy and those karma bumpers notwithstanding, I wouldn’t count on it passing a Euro NCAP crash test with flying colours.

But it is brimful of charm and its modern Isuzu mechanicals mean it goes and changes gear reasonably well.

Like a true taxi driver he tells me who he’s had in the back of his Amby.

“Kate Moss, Sienna Miller, Elton John… Two weeks ago, Poppy Delevingne used it for her wedding. She loved it. A car like the Amby spreads peace and love wherever it goes.”

Perhaps someone should tell Hindustan before it pulls the plug on the Ambassador for good.

With thanks to Karma Kars, Kensal Green, London – www.karmakars.net