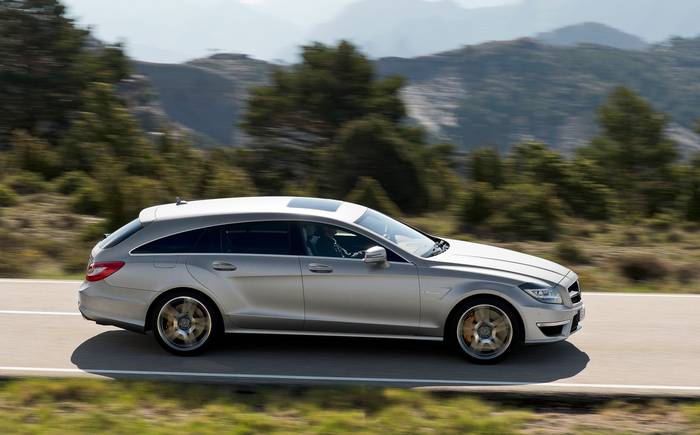 There is almost nothing harder in this business than reviewing an AMG Mercedes. Because the engine dominates everything. It doesn’t matter whether you are in a two-seat sports car or a four-wheel-drive off-roader or a large executive saloon, all you can think about, and hear and feel, is that massive, throbbing, tumescent muscle under the bonnet.

AMG-powered cars all handle in pretty much the same way as well. In that they don’t really handle at all. You push the accelerator and you are going sideways, immediately. And I’m sorry but when you are on the Oxford ring road, in a cloud of your own tyre smoke, being deafened by the jackhammer soundtrack, it is pretty difficult to think about seat comfort or visibility or indeed anything much at all.

Search for and buy a Mercedes CLS on driving.co.uk

In an AMG the car is simply the knife and fork. The engine is what you’re eating. And in a restaurant it’s the food that matters. Not the utensils needed to deliver it to your mouth.

However, in recent months things have changed. When AMG started making mainstream cars, it had supercharged and non-supercharged 5.4-litre V8s in various states of tune. And then it did a range of non-supercharged 6.2-litre V8s that for reasons we don’t understand were claimed to have a capacity of 6.3 litres.

All these engines were exactly the same. Choosing which you liked best was like choosing a favourite type of thunderclap. Some were a bit more powerful than others but when you were screaming and praying and sweat was flooding out of every pore, you really couldn’t tell.

Now, though, things have changed. All the new AMG engines are twin-turbocharged 5.5-litre V8s, and they’re different. The bellow has gone, and with it the terror. You can now drive an AMG without ear defenders and nappies. And this means you can concentrate on what the utensils are like.

As a diesel-powered estate car, the CLS Shooting Brake doesn’t appear to be that good. It’s less spacious — at least with the seats down — slower from 0 to 62mph and considerably more expensive than rivals from Jaguar, Audi and BMW. But that isn’t the case with the AMG 63 version. Because it doesn’t really have any rivals at all.

The CLS saloon was, it’s said, designed by a Mercedes stylist almost as a doodle. He wanted to know what a Jaguar would look like if it were done by his company. His bosses liked what they saw, his squiggles made it into production and now there is an estate version called the Shooting Brake.

Strange name. A “brake” was the name given in the olden days to a carriage that was used to break spirited horses. Later, British landowners would modify them so they could be used to carry people, guns and dogs on shooting parties.

So, in the early days of the motorcar anything designed to carry stuff in the back was called a shooting brake, and when these became common on various estates around the country, the generic name changed to “estate car”. Think about that the next time you fire up the five-door Ford Escort.

Today, to get away from the rather toffish imagery, car makers call their estate cars by other names. BMW has the Touring and Audi the Avant. And the Americans, of course, the station wagon. Because over there large, practical cars evolved at railway stations, hauling goods from train to train, rather than on grouse moors.

But Mercedes has ignored this egalitarianism and resurrected the shooting brake handle. On perhaps the least practical estate car in human history. For a shooting party it would be hopeless. Unless, of course, the shooting in question were a drive-by in Los Angeles. Then, I suspect, it would be excellent.

The 63 AMG version is very, very fast. And because the histrionics are mostly gone, sometimes you barely even notice. There’s a momentary strain on your neck muscles when you first plant the throttle, and the next thing you know, the white lines have become a blur and you’re in Arbroath.

It even does well on more testing roads. You always felt in old AMG cars that you were having to manhandle them through the bends. That’s something I like. But I also like the way the Shooting Brake seems to be dancing. It feels agile and light, which it emphatically is not.

And yet somehow, despite the power and the corpulence, it seems to have grip. You no longer have to countersteer every time you pull over to pick up a pint of milk. You can even get from one side of Guildford to the other without spinning.

It’s comfortable too. On even the most potholed roads it would make a tremendously stable gun platform. It’s a bit like an ageing rock god. The anarchy is still there in its DNA. But these days it prefers cocoa to cocaine.

Problems? Yes. The traditional automatic gearbox with its torque converter has been replaced by a multi-clutch system. Doubtless this is very good news for Johnny Polar Bear, but, like all modern flappy-paddle solutions, it is annoying.

In Comfort mode, things are just about acceptable, but if you switch the system to Sport, it becomes dimwitted. Especially around town, where it has a habit of responding to requests for more speed exactly half a second after the gap you were aiming for has disappeared.

Also, my test car had so many toys, the dashboard was almost indecipherable. And if you dive into a submenu to see what’s what, or maybe turn off the lane-keeping assistance, you could be stranded in a world of electronic gobbledygook for a year.

Further back we find that the boot lid opens and closes electrically. Why? Who thought that customers would enjoy standing in the rain for an age, looking like dorks, while the motors went about their business? I have arms. I can open a boot perfectly well, thanks.

Not that there’s much point, in the CLS, because this really isn’t designed for the antiques dealer in a hurry. You’re certainly not going to get a wardrobe in there ­— that’s for sure. And that’s because this car is like its four-door brother. It’s mostly about style.

And I must say that on that front it does rather well. Today a lot of modern Mercs are overdesigned. They have too many creases in their flanks and too many unnecessary details. But this one is bob-on. It’s tremendous-looking, which leads me to a peculiar conclusion.

If you want a car to carry school trunks and horse paraphernalia, you can do better with the offerings from Jaguar, Audi and especially BMW. I think the 530d Touring is one of the best cars made.

And yet even that doesn’t have quite the appeal, somehow, of Merc’s new drive-by shooting brake. It’s not a sports car. It’s not really an estate. But, unlike anything else, it is a little bit of both.

I said earlier that it has no rivals, and that’s true. But only because these days you can no longer buy a Reliant Scimitar.

Search for and buy a Mercedes CLS on driving.co.uk