A SELF-DRIVING car operated by Uber that killed a pedestrian allegedly detected her as she crossed the road but “chose” not to alter its course.

A software function meant that the woman was categorised as a false positive to be ignored, according to an internal investigation. Company insiders said that Elaine Herzberg, 49, and her bicycle were acknowledged by the car’s sensors but then dismissed, much as a floating paper bag would have been.

The semi-autonomous Volvo SUV drove into Ms Herzberg as she crossed the road in Tempe, Arizona, on the evening of March 18 and she died in hospital that night. She was the first person to be killed by a driverless vehicle.

Sources told the Silicon Valley news site The Information that the car’s software had been tuned in such a way that it decided that evasive action was unnecessary. The Uber executives said that the detection system’s threshold may have been set to prevent constant braking and swerving.

Despite recent technological breakthroughs that have allowed carmakers to join Google, Uber and other tech companies in the race to autonomous vehicles, journeys taken in driverless cars remain uncomfortable.

Since Ms Herzberg’s death, Uber has suspended its tests of self-driving cars while an investigation into safety protocols is carried out by the head of the National Transportation Safety Board (NTSB) in the US.

Cortica, a company that develops artificial intelligence for self-driving cars, analysed dashcam footage of the incident and said that the computer system had detected Ms Herzberg 0.9 seconds before impact, when the car was about 50ft away. 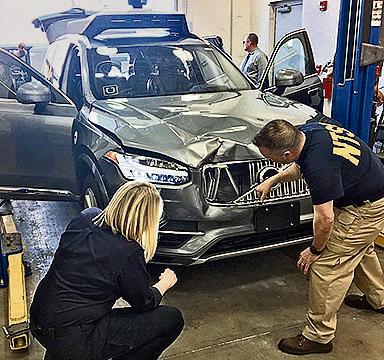 There was a “safety driver” in the car who was trained to take control manually if the automatic detection system failed, but police footage revealed that the Uber employee was looking down moments before the crash.

A spokesman for Uber said: “We’re actively co-operating with the NTSB in their investigation. Out of respect for that process and the trust we’ve built with NTSB, we can’t comment on the specifics of the incident.

“In the meantime, we have initiated a top-to-bottom safety review of our self-driving vehicles programme, and we have brought on former NTSB chairman Christopher Hart to advise us on our overall safety culture. Our review is looking at everything from the safety of our system to our training processes for vehicle operators, and we hope to have more to say soon.”

The report could prompt other self-driving car companies to treat potential false positives with more caution.

It was revealed in March that driverless cars could be on British roads by the end of the year under plans to scrap the requirement for a safety driver. Experts continue to warn against the technology that relies on a human driver to step in, however.

Christian Wolmar, a transport expert and author, said of the report: “This shows the limits of the technology: the computer has to make decisions and will get it wrong, just as humans do.”

Uber unveiled its “flying taxi” in California yesterday. The electric vehicle, which the company hopes to introduce within five years, is designed to fly between 150mph and 200mph up to 2,000ft above the ground, and will cover 60 miles on a single charge.

This article was originally published in The Times