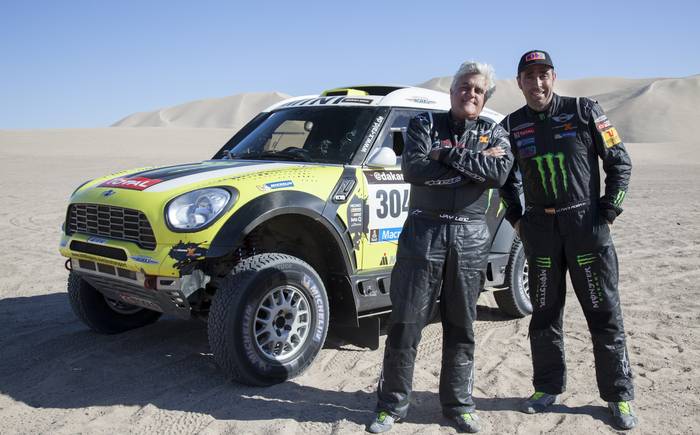 MY MOTORING ambition has always been to collect unique driving experiences. Recently I was driving my Doble steam car. A day later I was in Death Valley, California, strapped into the Mini that won this year’s Dakar Rally, blasting up the side of a sand dune the height of the Empire State Building.

I think most people have heard of the Dakar Rally. It is to Formula 1 what bare-knuckle fighting is to boxing. It started 35 years ago in the Sahara desert, designed for crazy French guys in everything from Citroën 2CVs to Rolls-Royces. Now the cars are bespoke $1m machines such as the Mini All4 Racing, and the race is 5,500 miles across South America. In a world of political correctness, here’s something that is off-the-chart crazy and that gets people excited.

My only previous off-road experience was overshooting the freeway exit. Teaching me how to drive the off-road monster Mini was Joan “Nani” Roma, who won this year’s Dakar in the car. Quiet and modest, he is a true hero.

Five hours in the Mini was enough for me physically. It’s like somebody kidney-punching you. To do the Dakar you have to be an athlete. Roma spent 10 hours a day for two weeks at the wheel. The Spaniard is also a smart guy. When the rally was held in Africa, where he competed on a motorbike, he learnt the dunes by following camel tracks. There are no camels in California, of course. 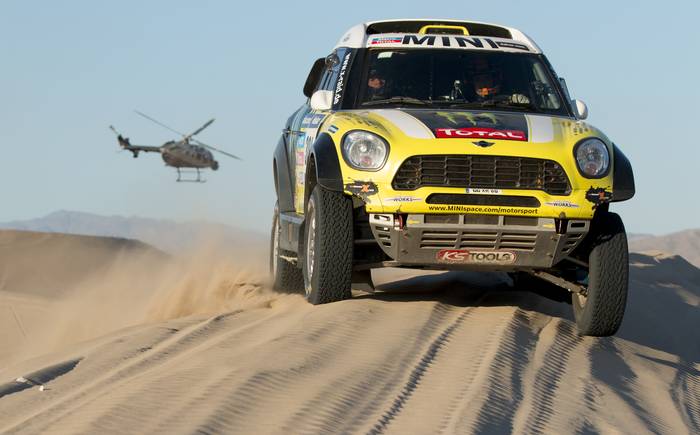 Traditional racing cars are built to be as light as possible. The vehicles that compete in the Dakar are the opposite: they are as strong as possible. My car weighs in at almost two tons, making it the heaviest Mini yet produced, but it’s still a racing car. That sounds ridiculous.

The thing I liked best about it was that it looked like a Mini — albeit a heavily modified one. I enjoy racing cars when a manufacturer, in this case BMW, which owns Mini, uses its own engine and the car looks as it’s supposed to. The rules for this race are that you must use the manufacturer’s engine and a high percentage of original parts, which keeps the costs down for racers. It also makes the fans identify with the car because, wow, the car I own and use to visit the shops looks like that.

This car was built in Germany, and there’s a lot of clever stuff in it. You notice the engine is not in the same place as it is in a normal Mini. In fact, the 3-litre BMW diesel unit is not fitted to production Minis and is positioned further back than you would expect, towards the middle. Although it’s a heavy vehicle, all the weight is low down. Just about everything above the chassis is carbon fibre. When the car is crossing dunes at 45-degree angles, having a low centre of gravity helps — or at least makes it less likely that it will flip over.

There were some sand-buggy guys out on the dunes at the same time as me, with vehicles built specifically to climb dunes, and they were saying there was no way the Mini could climb that hill. They were stunned when something that looked like a production car was able to climb a dune 1,500ft high.

There were some sand-buggy guys out on the dunes at the same time as me, with vehicles built specifically to climb dunes, and they were saying there was no way the Mini could climb that hill. They were stunned when something that looked like a production car was able to climb a dune 1,500ft high. 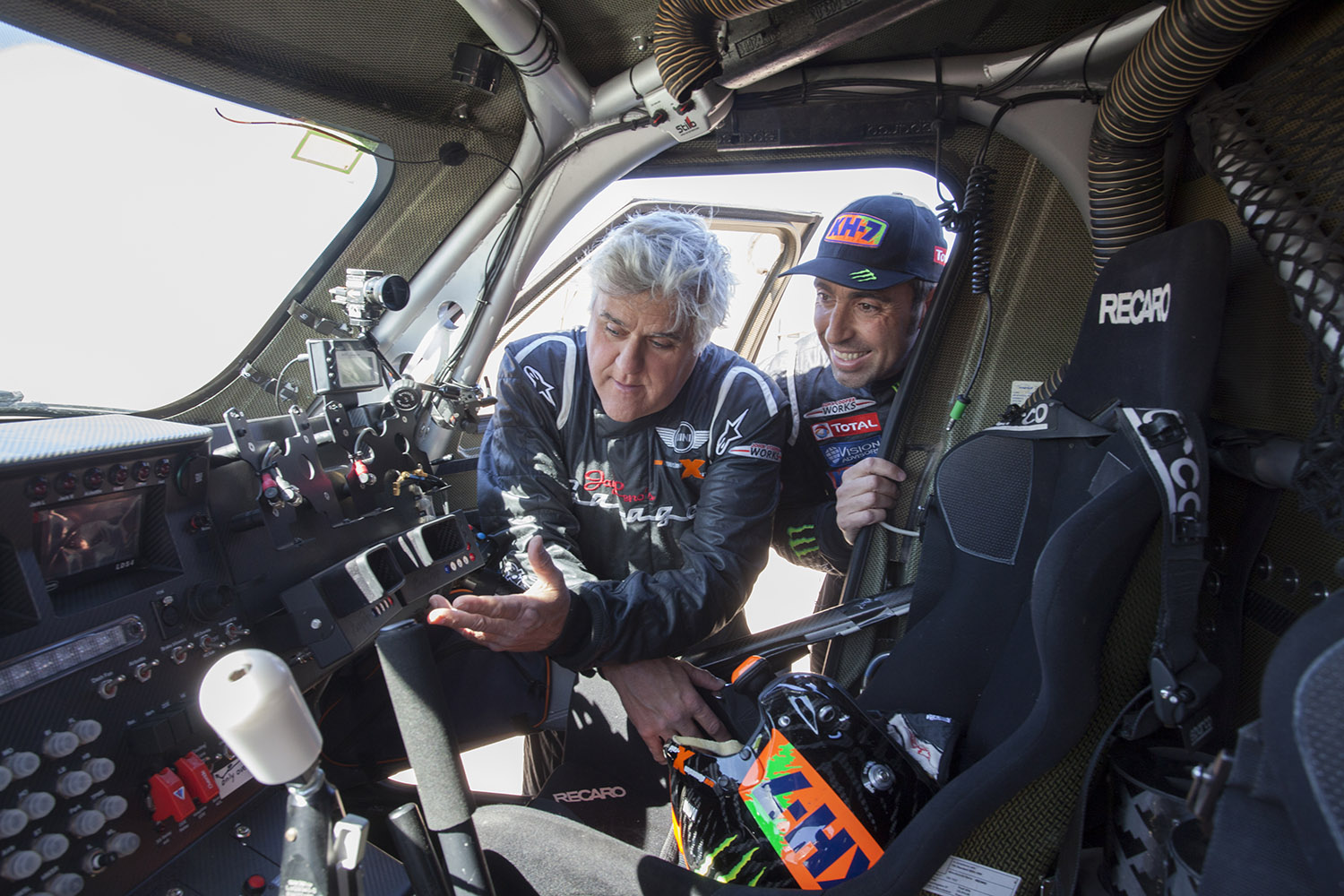 Roma took me out to show me the ropes first. It was amazing to see the car in his hands. He was like a surfer on a giant sand wave. I didn’t know whether the car was going to go left or right. And then you’re climbing a hill and all of a sudden you drop 20-30ft. I was getting a little dizzy.

But when I got behind the wheel, I had the exact opposite feeling — I was in control. It was exciting. When you put a novice in a racing car and they go out on the track, they either spin off or stall. None of that happens with the Mini because the power overcomes everything else. When you feel it start to bog down, even if you’re in the wrong gear, you just put your foot down and it sends up big rooster tails of sand and gets going again.

It’s not a relaxing drive. At 100mph a road car feels as though it’s going 60mph, but 100mph in this Mini felt like 200mph, because we were going over bumps. I have to say I could do with this car in Los Angeles — the streets are actually worse than the course of the Dakar Rally.

The thing I found really impressive was that the car was virtually unbreakable. As someone who restores cars and works on cars, I know how fragile they can be. This thing is just a monster. You can push it over and roll it over and it just comes back for more. 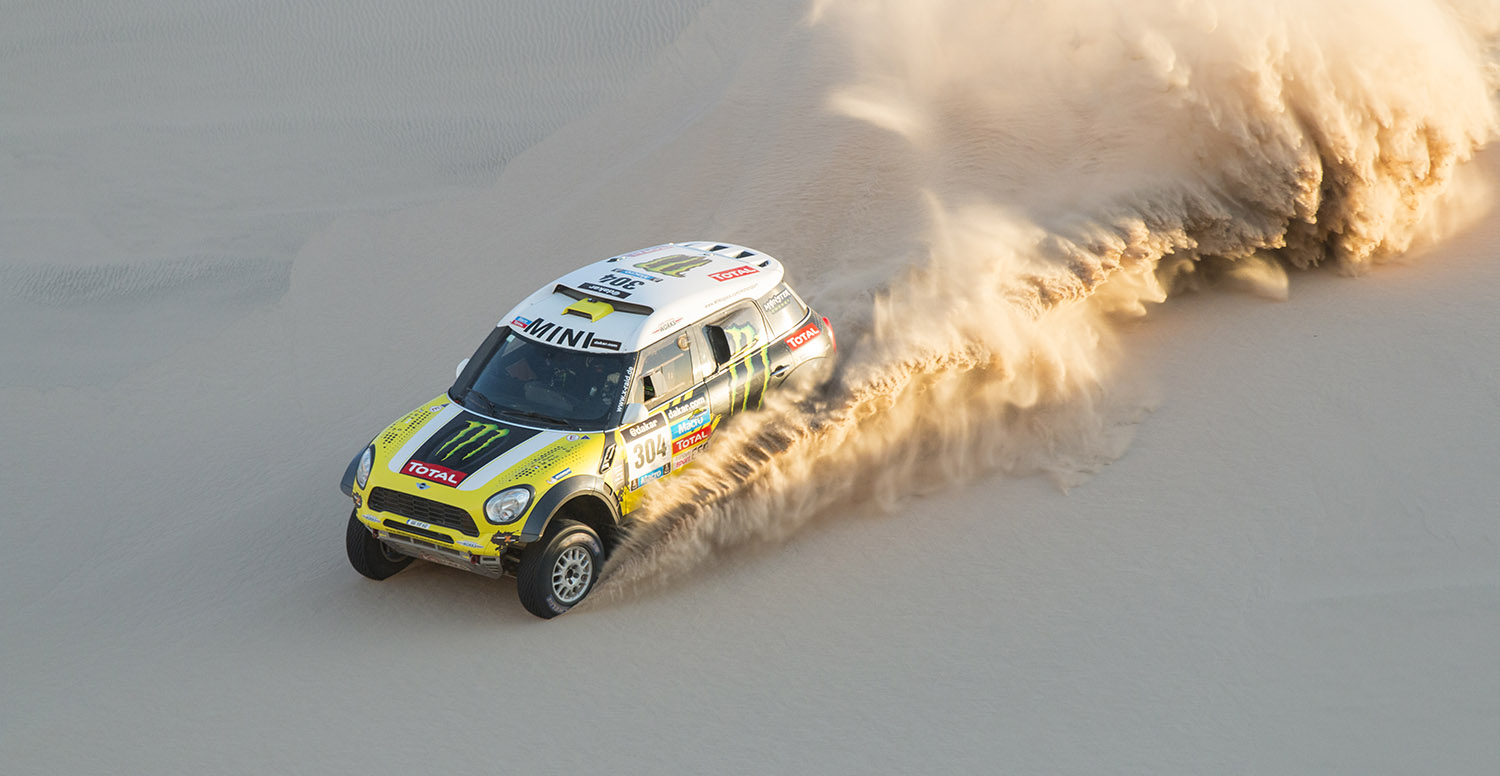 The one word that everyone uses to describe driving a Mini is “fun”. But while you think of Minis as being agile and handling well, you don’t think of them as being powerful. This is a really powerful car. It has a lot of torque and there’s a lot of horsepower for the size and the weight. That’s the really impressive part.

It was like going back to the 1960s, when Carroll Shelby would take a big V8 engine and put it in an AC Cobra. That’s the feeling you get from this.

Driving it took me back to my childhood in Massachusetts. When I was a teenager we would wait for the first snowfall and then we’d take our dads’ cars and go to the empty supermarket car park and slide around. That’s what this felt like. You get up in those dunes and the car is so controllable, you can drive it with the throttle.

I don’t often get a chance to do this sort of thing because when I was doing The Tonight Show for 22 years I always had to be within 50 miles of the studio in California. You need to get out of Los Angeles to find this kind of terrain.

It’s something I’d like to do again. It was really exciting. As far as driving experiences go, this was one of the great ones.