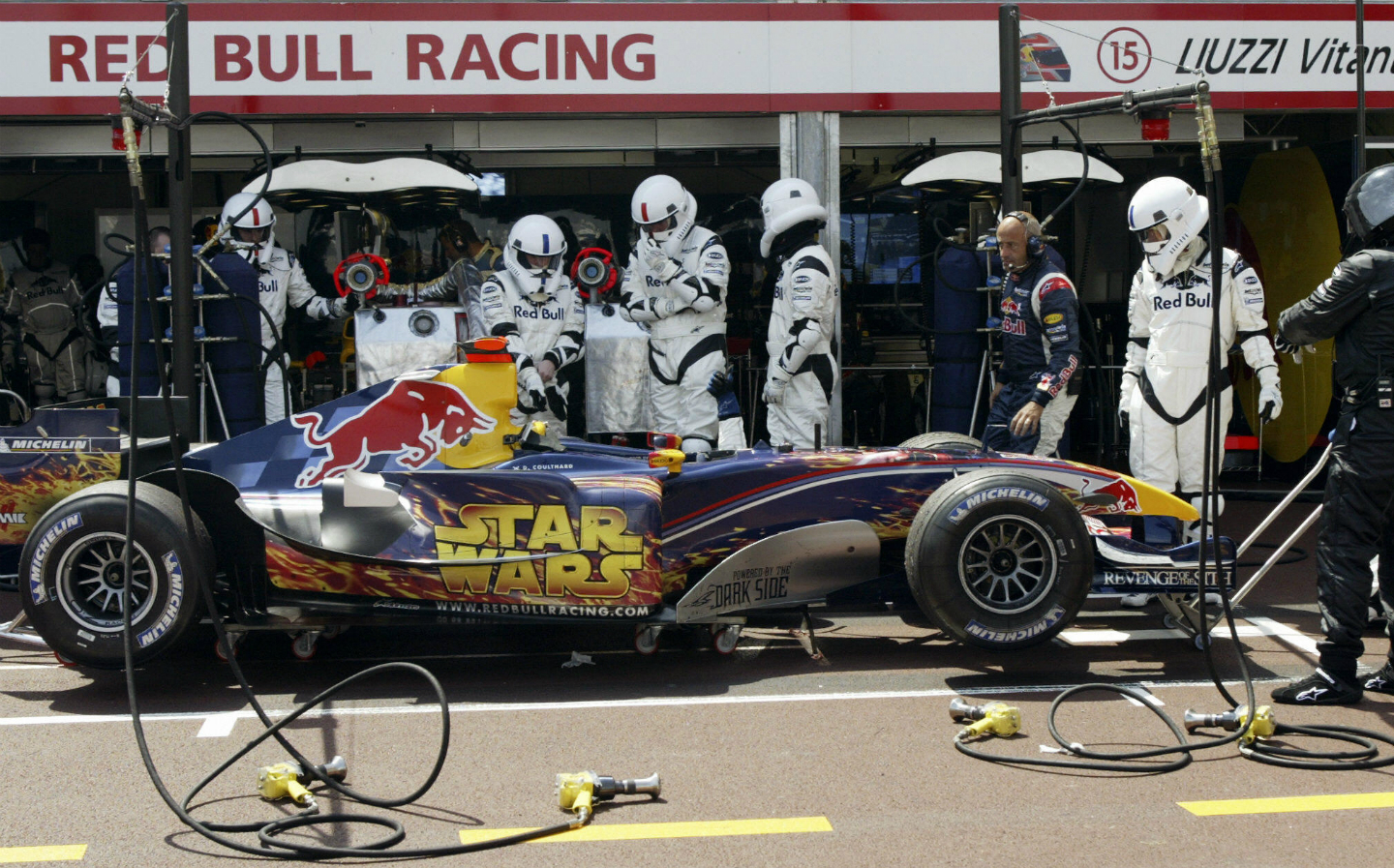 CARS MAY be several hyperspace jumps away from Star Wars ships such as the X-wing and Millenium Falcon, but that hasn’t stopped the world’s auto makers from channelling the spirit of the Jedi-based saga into their vehicles.

From custom one-off motors to branded limited editions smothered in motifs from a galaxy far, far away, some car makers have done everything the can to link themselves to the George Lucas-created series.

Here are our picks of some of the more interesting cars that tie(fighter) themselves to the famous film franchise. 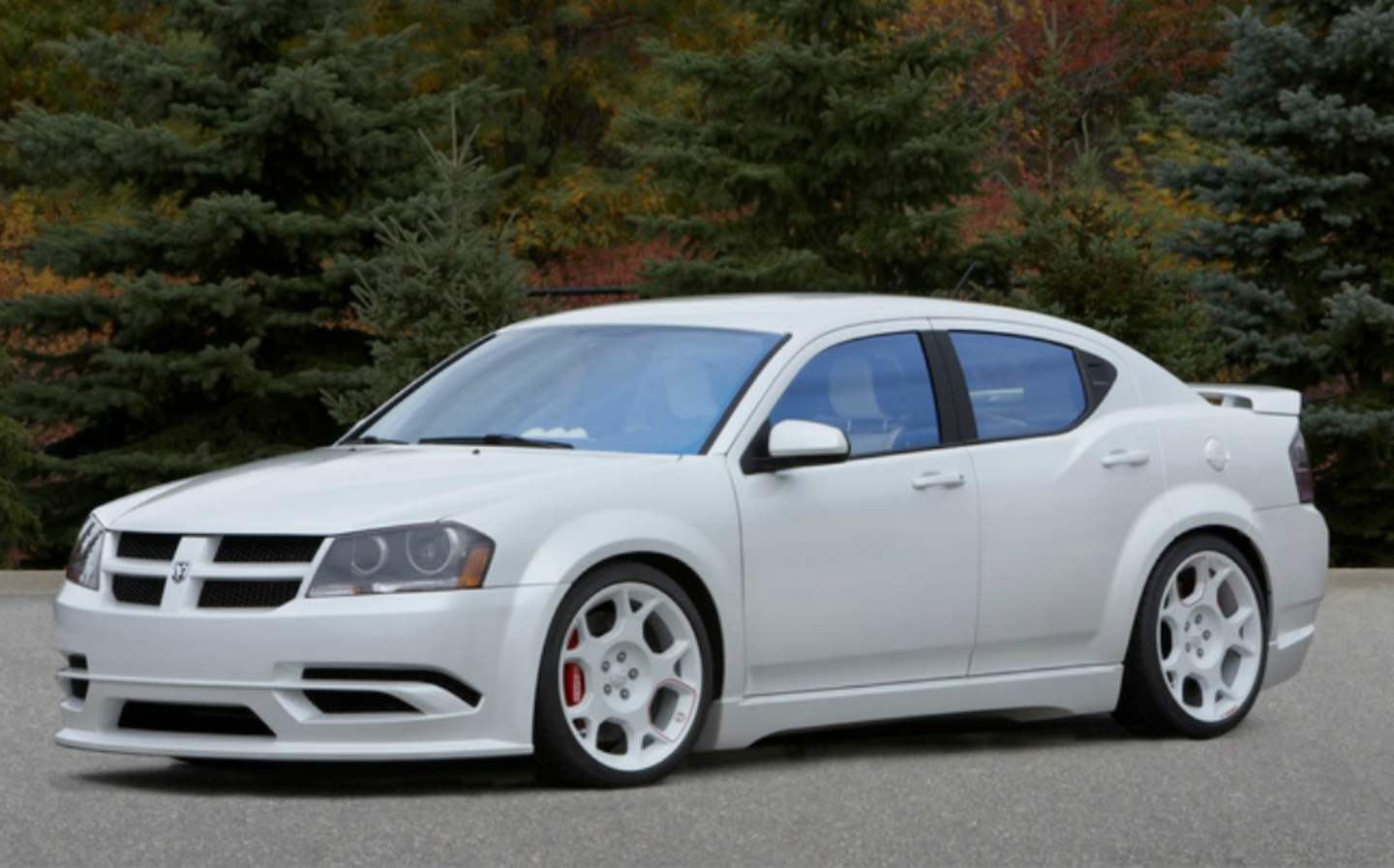 The Dodge Avenger’s Star Wars connection goes beyond sharing its name with an Imperial II-class Star Destroyer (the huge ship that hunted down the Millenium Falcon in The Empire Strikes Back was also called Avenger): the four-door family saloon was used for a Stormtrooper-inspired custom car project.

Unlike the other vehicles on this list, its updated styling contains only subtle nods towards Star Wars – the all-white colour scheme being the most obvious link to Imperial Stormtroopers. But what the bespoke Avenger lacked in aesthetic cues it made up for with performance upgrades.

Under the bonnet is a “digitally-tuned” 4-litre V6 engine, and the drivers’ car credentials are boosted by grippy Michelin Pilot Sport tyres, high performance brakes and the custom-made coil-over suspension setup. 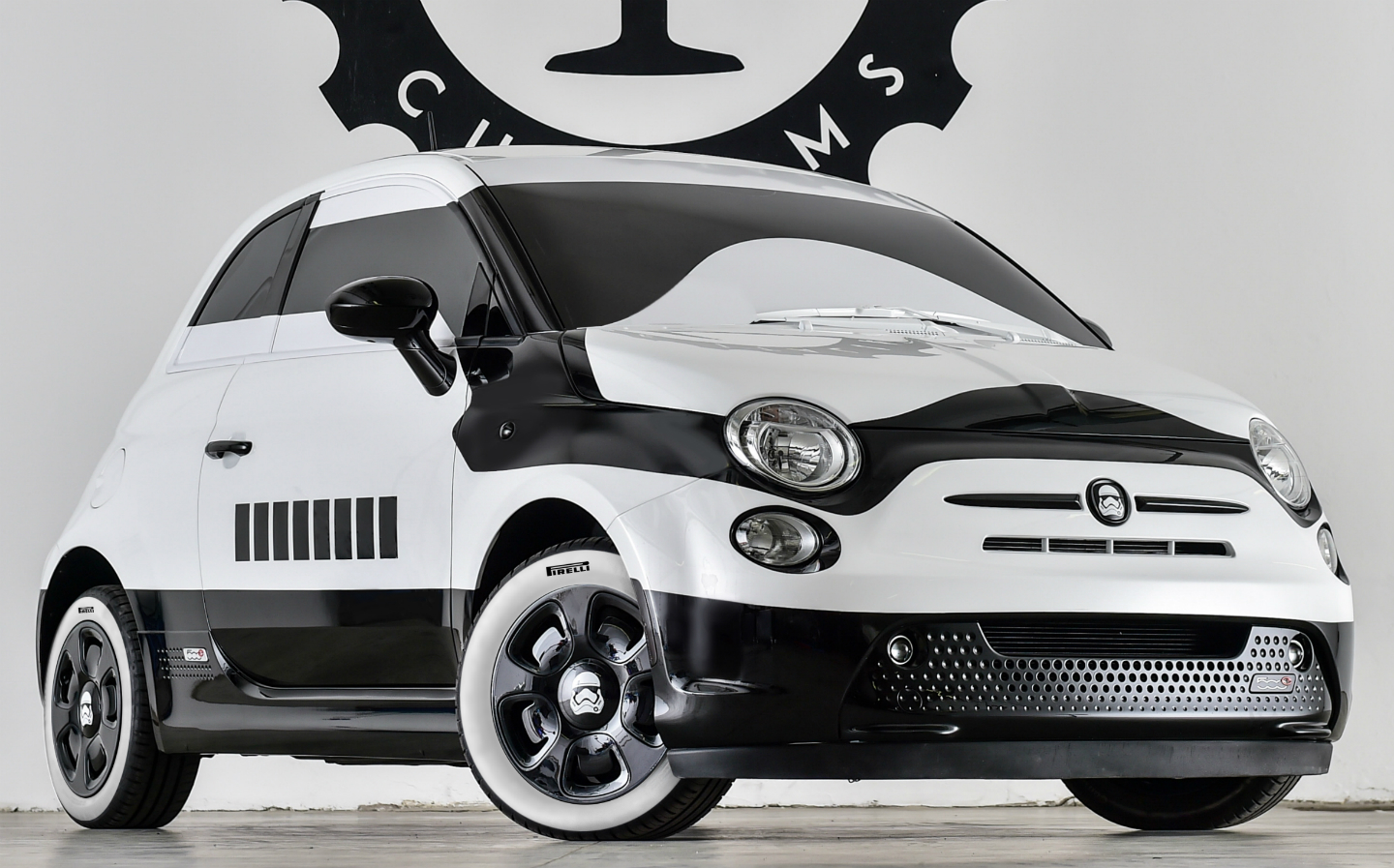 Fiat managed to cram far more Star Wars details into the 500e First Order Stormtrooper. Star Wars logos and black-and-white trim adorn the interior, and the distinctive bodywork wrap was meant to be reminiscent of the helmet worn by First Order Legion soldiers.

The Fiat 500e’s pure-electric powertrain is a bit more sci-fi than the Dodge’s big, old-school petrol engine. Though, as the motor only produces 111bhp, the Stormtrooper-inspired Fiat probably shouldn’t attempt the Kessel Run in under 12 parsecs. 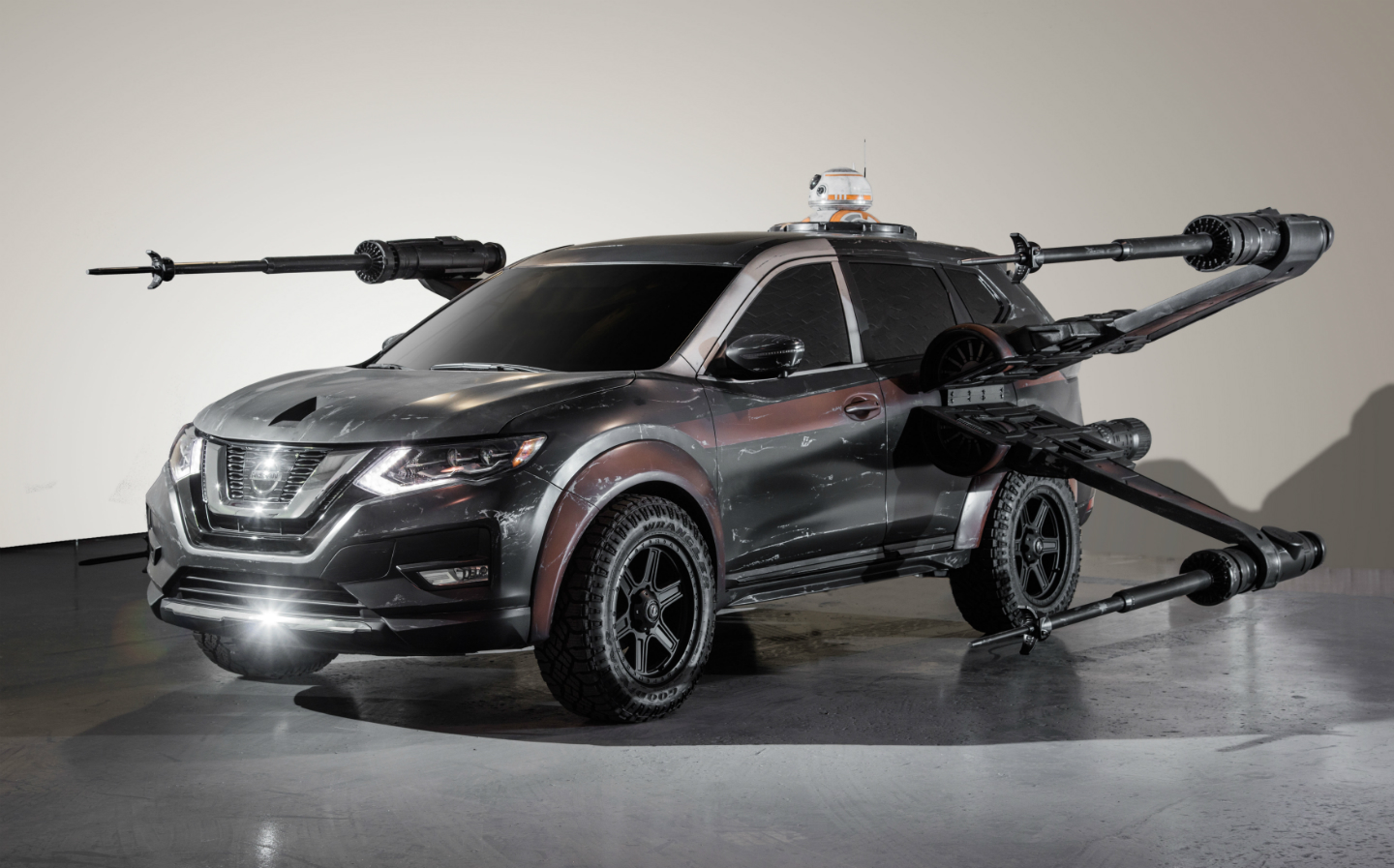 Nissan has Poe Dameron, the Rebel Alliance’s X-Wing ace, covered if he fancies settling down and becoming a family man once he’s done fighting the First Order. As this one-off modified Rogue SUV (sold in the UK as the X-Trail) features a pair of split wings with blasters on each side, other mums and dads would do well not to incur your wrath outside the school gates, though parking at Sainsbury’s would be a right pain.

The Rogue’s thrust drive engines mean journeys to the seaside would be over before you can say, “That’s one hell of a pilot,” and if anything went wrong mechanically, it could be sorted out on-the-fly by astromech droid BB-8, who has his own perch on the roof.

This isn’t the first time a Nissan Rogue has been given the Star Wars treatment, in fact. To coincide with the release of the Rogue One spin-off movie in 2016, the car maker released the “Rogue One Star Wars Limited Edition” variant in the US and Canada.

It’s not just car makers that have embraced Star Wars over the years. To coincide with the release of the Revenge of the Sith movie, the Red Bull Racing F1 team created a striking one-off livery for its two cars at the 2005 Monaco Grand Prix. Its pit crews even donned stormtrooper-inspired overalls.

The Force wasn’t with Red Bull for the race, however, as its drivers David Coulthard and Vitantonio Liuzzi failed to reach the chequered flag; marking the first time Red Bull failed to finish a race with both of its cars in a points-scoring position. Poodoo! 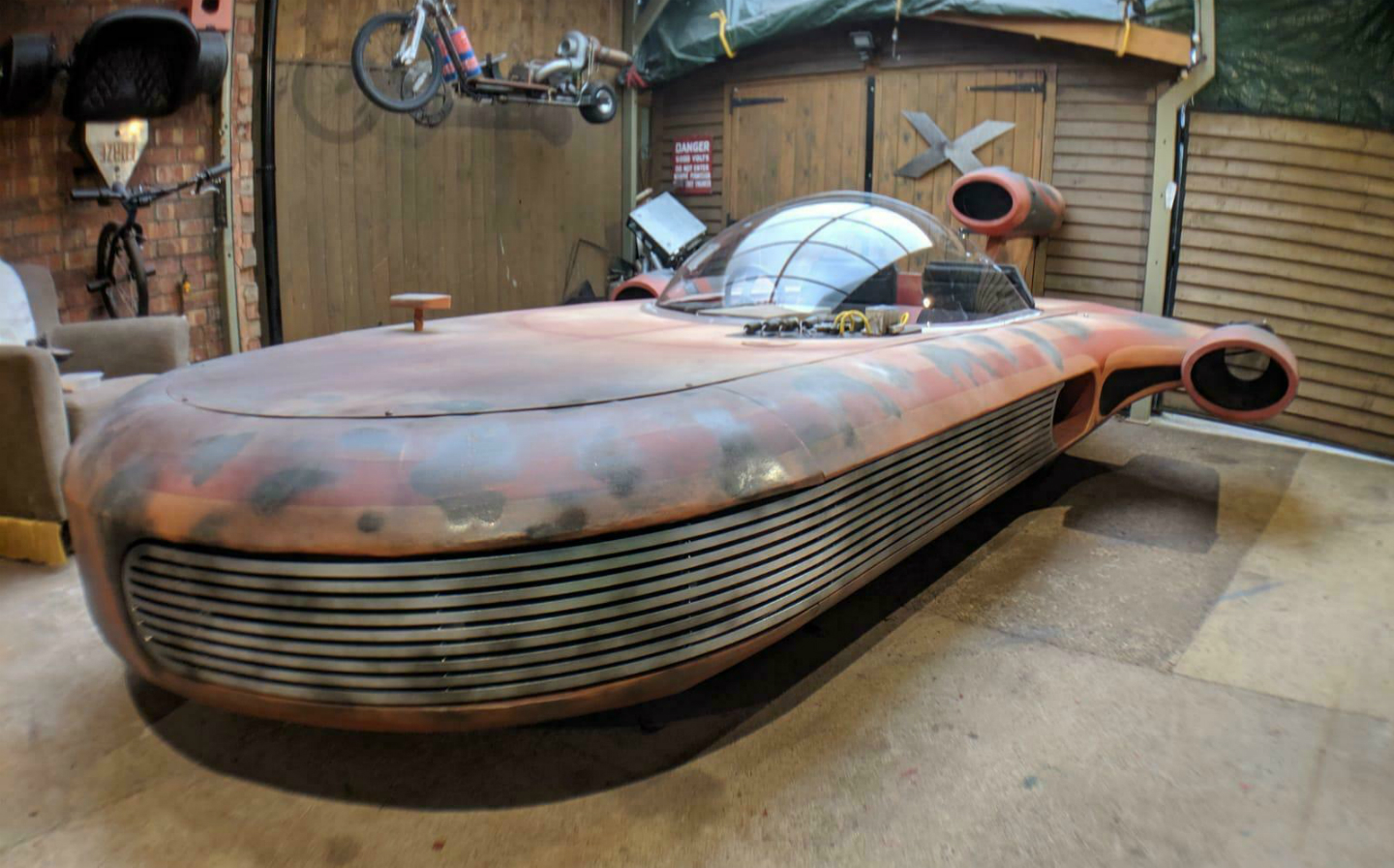 Okay, so this one technically isn’t a car but a custom-made golf buggy-based replica of Luke Skywalker’s Landspeeder from the original Star Wars film. It’s an impressive effort by creator Colin Furze, who became a YouTube sensation thanks to his outlandish custom builds and enthusiastic presenting style.

More importantly still, the speeder will help give a new hope to disadvantaged children and young people across the UK, as the £50,000 raised from its sale earlier this year was donated in full to the BBC Children in Need charity.

Porsche has designed its own space ship for Star Wars universe