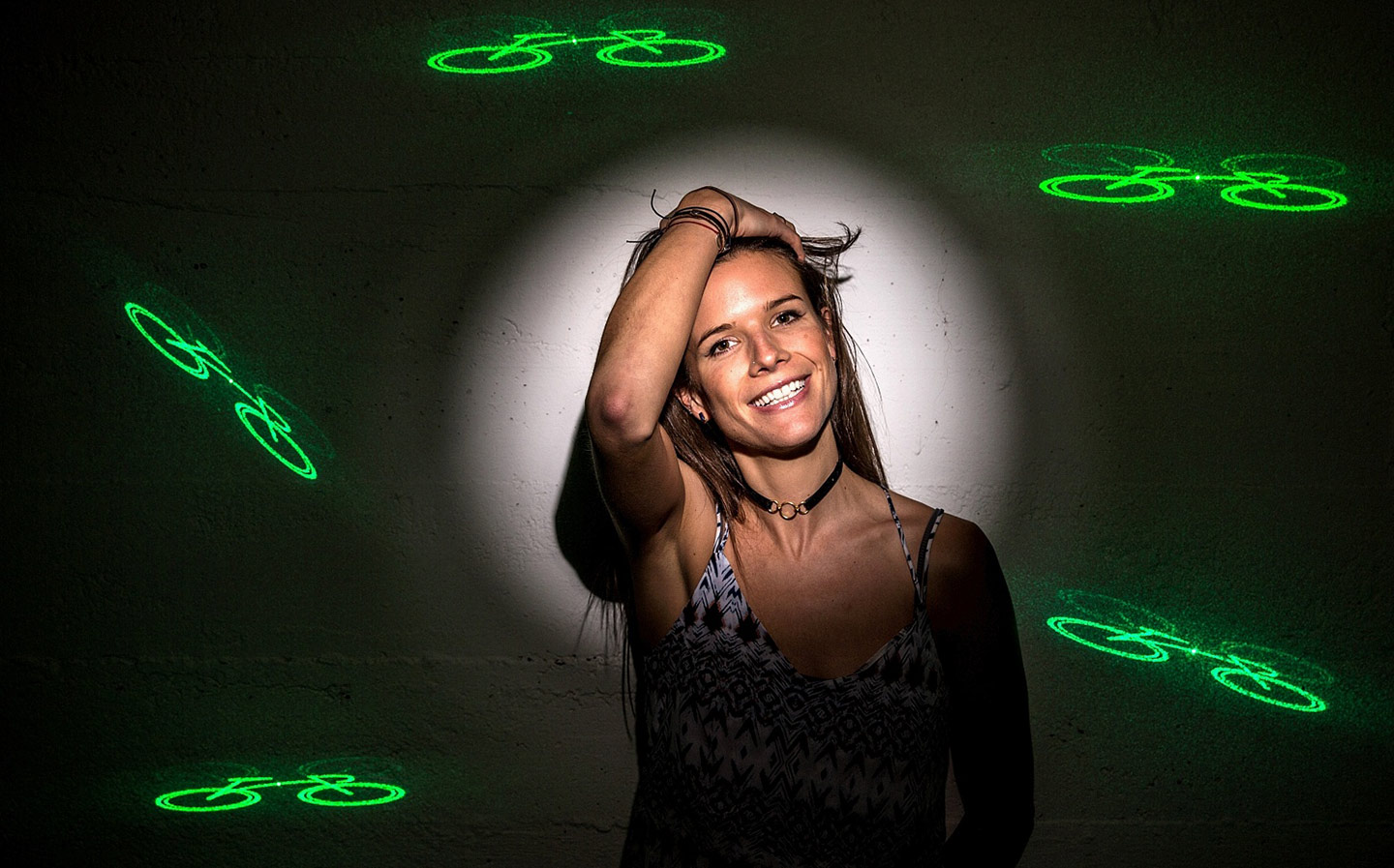 FORGET about painting the town red. For five years Emily Brooke has wanted to make the night-time streets of the world’s great cities glow green, yet it was only at the end of last year that her bright idea started to dazzle the City’s great and good.

At least, those who ride bikes. Blaze, the young designer’s company, has secured deals with London and New York’s cycle-sharing schemes that have led to its Laserlight product being installed on thousands of bikes. As well as providing a conventional light, the product shines a green, laser image of a bike on to the road ahead. The idea is to alert motorists, particularly those driving large vehicles susceptible to blind spots, that a cyclist is near by, hopefully saving lives.

Ms Brooke had the idea while studying design at the University of Brighton. She graduated in 2011, has been selling Blaze lights since 2012 and felt, finally, that she had made her breakthrough when she recently began to see her patented invention on scores of “Boris bikes” around London.

“Now it seems like they’re everywhere. It’s crazy,” she says. “You can explain the idea to people and they’ll go ‘OK, I think that makes sense’. But seeing it on the street makes them say ‘Oh that’s great’.”

Blaze also sells its lights directly to consumers and through retailers including Evans Cycles, but Ms Brooke, 31, believes that supplying cycle share schemes, as well as getting her products installed on bikes at the point of production, is going to provide the lion’s share of future revenues.

Private investors backed the business to the tune of £4.5 million last summer, after a smaller investment from the family of Sir Richard Branson and Index Ventures, the venture capital firm.

“Everyone talks about driverless cars, but bikes are going to have to play a huge role and we want to be at the forefront of that”

“We only needed a fraction of that,” Ms Brooke says. “We were looking for a few hundred thousand pounds for some headroom. Now we have plenty of space to work things out.”

Blaze’s breakthrough deal with London’s bike-sharing scheme, agreed in late 2015, came as a surprise. “People kept saying to me ‘Why don’t you do the Boris bikes?’ Well, thanks for that, we’d love to. But we never thought it was possible. Then they approached us.”

A study by the Transport Research Laboratory suggested that the product could improve safety for road users and, after a successful trial, the lights are being rolled out across the city-wide scheme. An agreement with New York followed and now Blaze is optimistic that it could soon do the same in San Francisco.

The laser is merely a “foot in the door”, Ms Brooke says, with the company hoping to sell a variety of products to the operators of city bike-sharing schemes. For example, Blaze can provide the “brain of the bike” by collecting data on its usage, so that operators such as Serco, which runs the London scheme, can plan maintenance programmes.

The next target is to get the makers of electric bikes to allow Blaze products to be installed as standard. Ms Brooke believes that eventually there will be a more lucrative market in those who see bikes as a practical form of transport than the competitive middle-aged men who have helped the British cycling market to boom in recent years.

“You don’t see electric bikes much in the UK at the moment, probably because we tend to see cycling as a sport, people getting into their lycra and doing a time trial at the weekend. In most places in the world it is about transport and mobility and so an [electric] bike makes a lot of sense. By 2050, 70 per cent of us will live in cities and the challenge is mobility. Everyone talks about driverless cars, but bikes are going to have to play a huge role and we want to be at the forefront of that.”

Blaze’s products are mostly made in China and that is unlikely to change in the near future after a recent experiment with British manufacturing went awry. The problems have contributed to the company being late fulfilling orders from consumers who bought its latest product, a rear bikelight, via Kickstarter, the crowdfunding site.

Despite its illustrious investors, the young company tends to be left to fend for itself when it comes to dealing with everything from errant manufacturers to working with giant customers. “We are pretty much on our own. We are a bunch of kids figuring it out ourselves and growing it at the pace we want to.”

That means the role is “all-consuming”, Ms Brooke says. But she wouldn’t have it any other way. “There aren’t really working hours because you are never really off. But I’m lucky because you learn a tonne. Every week there is a new challenge and you find a way to get around it. It’s an adventure.”