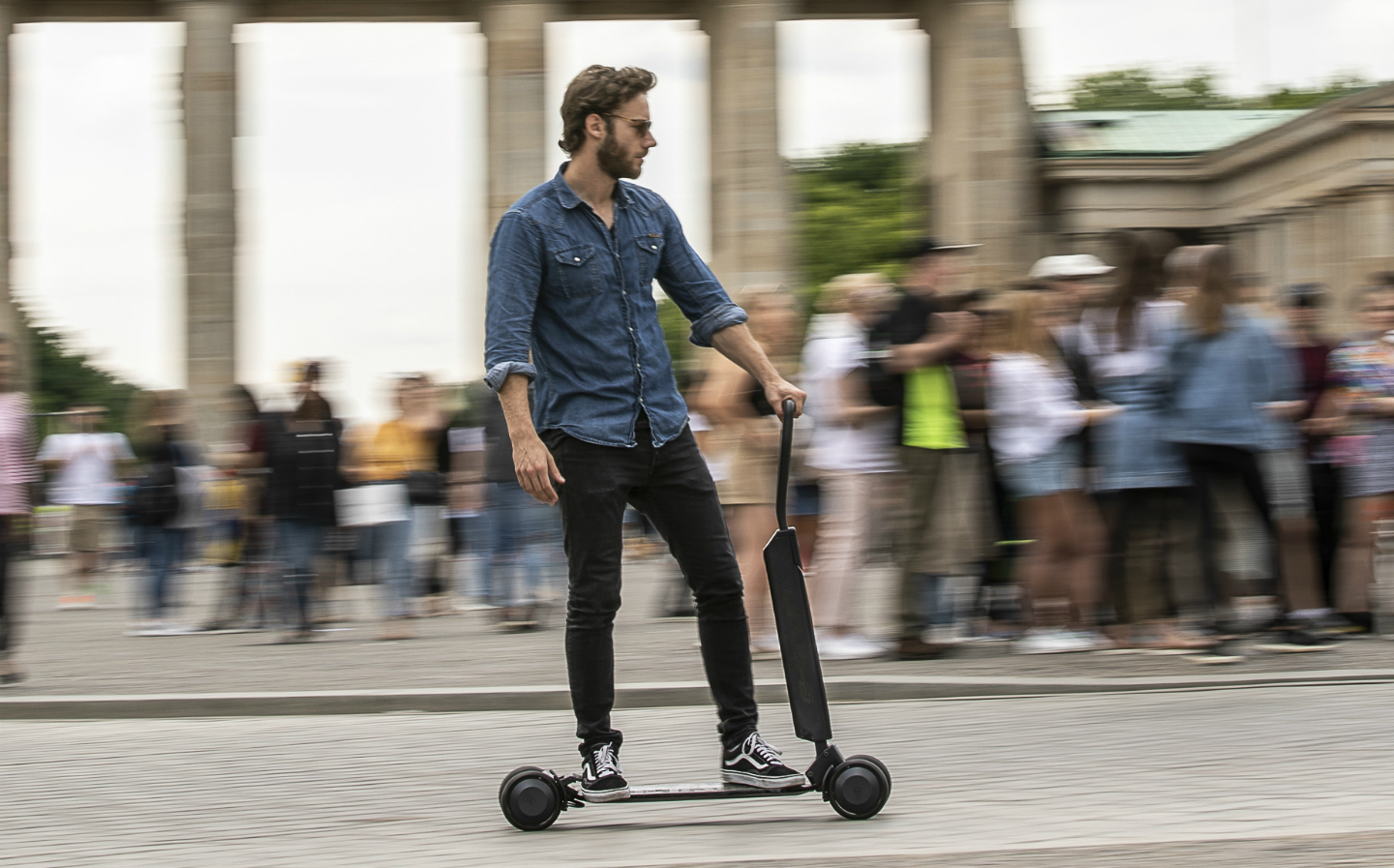 GERMAN car maker Audi has revealed a new addition to its growing range of pure-electric e-tron models: an electric micro-scooter.

Whereas the firm’s first pure-electric car, the e-tron SUV, and myriad future electric models can seat multiple passenger in comfort and be driven for long distances between charges, the Audi e-tron Scooter has been designed with far less ambitious journeys in mind.

According to the company, the e-scooter’s battery pack is good for a range of around 12 miles — helping make the e-tron Scooter ideal for “last mile” journeys in towns and cities, for example between an off-site work car park or train station and the office.

Though it’s been designed as an urban-focused mode of transport, the e-tron Scooter has a decent turn of pace and can reach speeds of up to 12mph. Audi says it’s good fun to ride, too, with the company likening the experience of using the e-tron Scooter to riding waves on a surfboard.

While the e-tron Scooter is a compact piece of kit, Audi has fitted a decent amount of equipment to its micro-mobility machine including a regenerative braking system, which helps extend the range by topping up the battery with energy harvested under braking, and Bluetooth functionality that lets users make “individual adjustments to the ride characteristics”. The Bluetooth system also doubles as an anti-theft protection feature.

Perhaps the most interesting feature on the e-tron Scooter, however, is its handlebar. Despite having a motorcycle-style twist grip that controls the throttle and braking, the handlebar is designed so that it can be operated with only one hand, allowing riders to use the other hand for duties such as making turn signals, Audi says.

While growing numbers of e-scooters have been sold in the UK, it is currently illegal to ride an e-scooter on public roads or pavements

For the less dexterous rider there is also a foot brake, though Audi says this has mainly been designed with emergency stops in mind.

Should you find the idea of an electric Audi scooter appealing, you’ll need to wait a while before you can buy one of your own, as the e-tron Scooter won’t go on sale until “the end of 2020”.

It won’t be a cheap purchase either, as the e-tron Scooter will be sold standalone for €2,000 (around £1,800 at current exchange rates).

Audi is  investigating other ways to find more homes for its e-Scooter, such as offering it as an optional extra for anyone who buys an e-tron Audi road car.

While growing numbers of e-scooters have been sold in the UK, it is currently illegal to ride an e-scooter on roads or pavements, so it remains to be seen whether Brits will be able to use their Audi e-tron Scooters in public when it goes on sale next year. At the time of writing, if you buy an e-scooter or a similar device in Britain, the only place you can use it is on private property.

This is in contrast to countries like Germany, where the laws allow e-scooters and Segways on the road  and visitors to Berlin can take a tour of the city by Segway.

There are signs that the UK law may be brought into line with that of Germany. In March 2019, the Department for Transport published future mobility strategy guidelines that suggested how devices like e-scooters and electrically-powered skateboards could “open up new avenues for urban mobility“, and even contribute to bringing down vehicle emissions as part of the government’s Road to Zero strategy.

There is likely to be resistance from many drivers and safety organisations, however, especially following the first fatal collision involving an e-scooter in Britain. Emily Hartridge, a TV presenter and YouTube star, died in July after her e-scooter collided with a lorry at a roundabout in Battersea, south-west London.