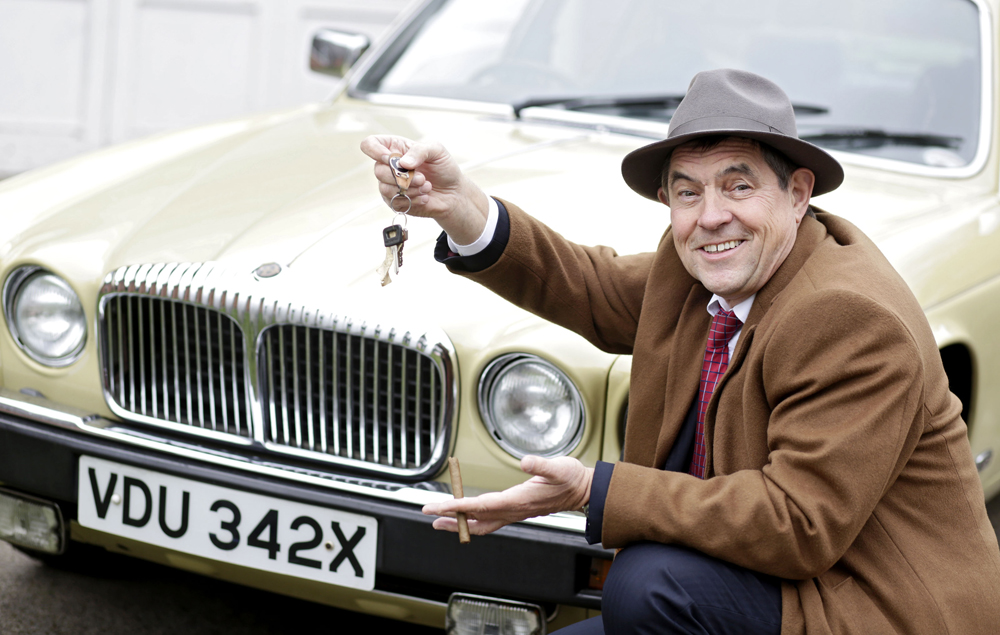 “A GENTLEMAN needs to be careful when he’s buying a class motor like this, guv’nor. There’s a lot of rogues in this business and they’ll steal the eye out of your head. But you’re lucky because you’ve come to Arthur Daley and I just happen to be prepared to let my own personal jam jar [takes off trilby, places over heart], which I have loved like life itself, go to the right home. You have an honest face, sir – make me an offer.”

The most famous of Arthur Daley’s cars in the TV series Minder has been offered for auction with a five-figure reserve. That’s a serious premium for provenance; a thirsty, 33-year-old Series III Daimler Sovereign 4.2 in similar condition might fetch a couple of thousand pounds without the history. Is this Arthur Daley’s last coup? Having road-tested the Daimler before the auction, I have to say it’s a runner, guv, but you’ve got a job of work on your hands.

Before my test drive and as I walk around the car, which is currently owned by a man called Dez Johnson, living in Newark-on-Trent, I can’t help hearing Arthur Daley’s voice echoing in my ear:

“Runs like a Swiss watch. This is the top of the range, the car a gentleman like yourself needs to be seen in. I happen to know the Queen of Sheba had one of these, and kept it for special. Margaret Thatcher herself used one to get from Downing Street to the Mother of Parliaments. Of all the cars made in 1983, this wears the crown.” 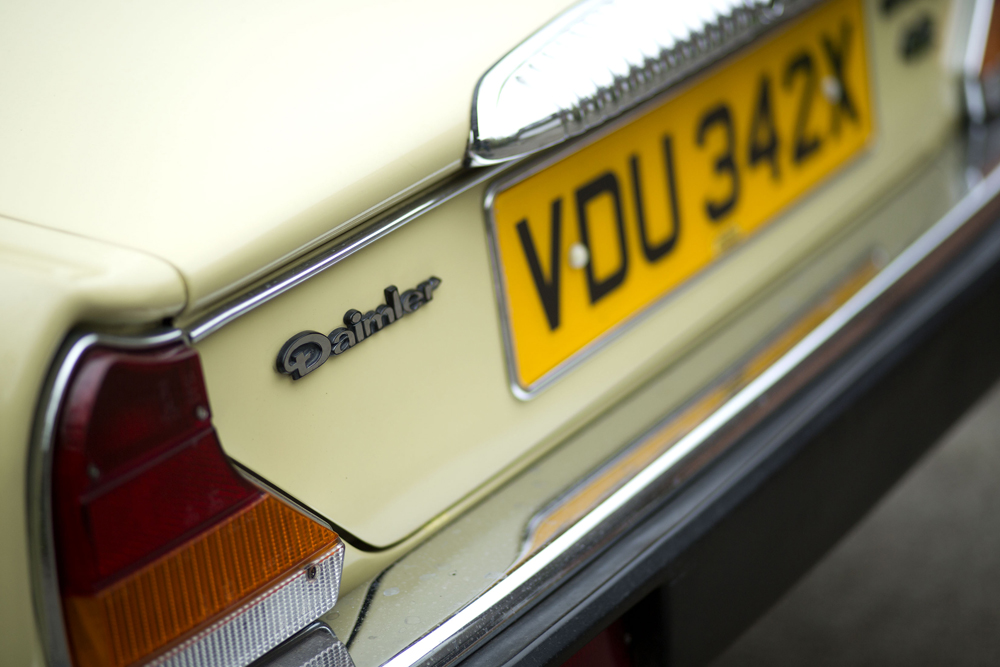 “There’s nothing ‘ooky about this car, sir. Those oiks who made Minder at Euston Films thought it improper for Arthur Daley to be going about in a nearly new 4.2 Daimler, so they aged it a couple of years. As you may plainly see, I have restored the 1983 plates and put the props in the boot. I’d show you but the key’s lost.”

The year 1983 was not a great one for Jaguar, makers of the Daimler. Under the nationalised British Leyland the marque was a byword for mismanagement and industrial strife. Build quality was often dire, cars left the factory with major faults and it was not unusual, even with the most expensive Daimlers, to take delivery of a new car and find clocks didn’t work and crisps under the carpet where the workers had sat in the vehicle to eat lunch. As luxury executive transport, however, it was de rigueur for the upwardly mobile man on the make. When the Minder Daimler was made, few believed that Jaguar would survive. Not until Thatcher prised the company from the clutches of the civil service did it begin to climb out of the pit.

“That’s as may be, sir, but I happen to know this car was made on a Wednesday morning when the Chairman, Sir Michael Edwardes himself, was standing on the production line to make sure the job was done right. 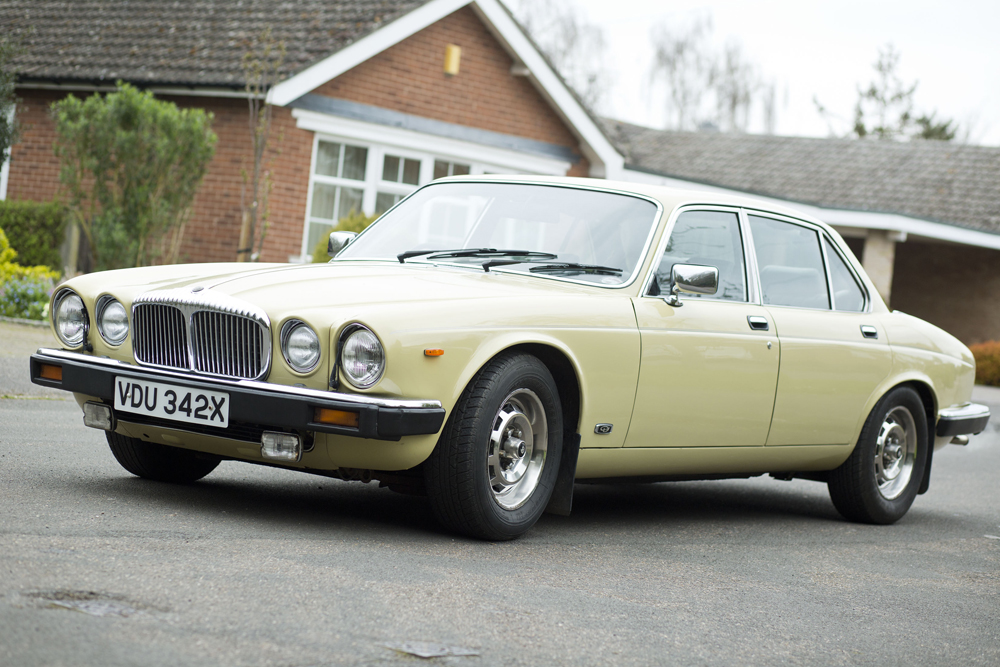 “Consider this fantastic array of accoutrements; luxury you couldn’t find on ordinary motors for years after: electric windows, sunroof and mirrors, and even rear seat belts when they didn’t force you to belt up in the back until 1991. There’s cruise control, climate control, a Philips radio with an electrically retractable aerial. It all works; well, almost all.”

I’m not sure about its colour: yellow.

“That’s not yellow, sir; that’s Portland Beige ‒ very classy. Observe this bodywork and tell me it hasn’t aged a lot better than Terry himself. If the gaps between panels seem random, look at them from a different angle and they’re fine. Never mind the paint blisters; I’ll buff them out before you take it away. Listen to this door clunk shut; now that’s quality for you. And these seats: real leather, beautiful – Jaguar seats were always soft… You might have to put some new springs on the driver’s side, but think of the famous bums that have polished it. 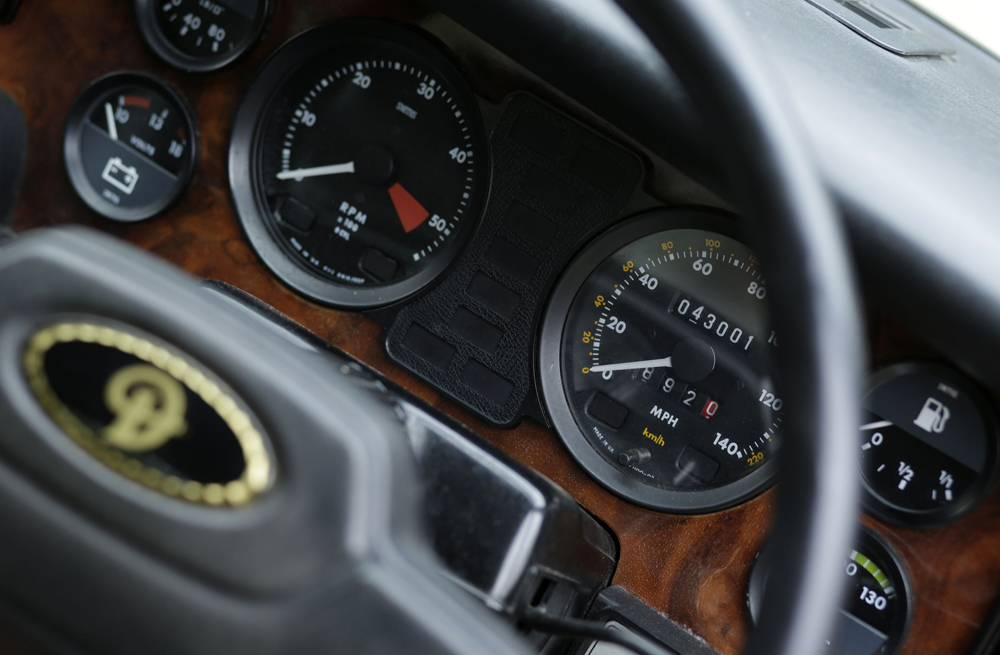 “Cop a feel of the leather steering wheel, with that golden “D” in the boss. Look at this walnut fascia – real wood, none of your plastic – and the big round rev counter and speedo. Dead fashionable that is now. They call it retro. Look, here’s the electric window switches, and this is what everybody needs: not one but two enormous ash trays. You won’t have to empty them for days.

“Turn the key, sir, she’ll start first time, most times. The noise? They all do that, sir, especially if they’ve not moved from storage for 12 years. Yes, the exhaust breathes a bit but a little gaffer tape will sort that. I’ll jump in and you can take her for a spin.

“That clunking noise? The brakes might have been binding a bit. That’ll go away in a few miles. What about the power of that V6, eh? They put them in Scorpion tanks, they did. You can fettle the suspension easy; not a big job. Just feel that power steering. You can spin the wheel with your pinky. The kick-down? Yes, I think there might be a minor problem there. It was an early type of microswitch, I’ve seen them on eBay for a couple of sovs. Don’t give it a second thought. Wind noise? It’s a very blowy day, don’t you think? Try driving downwind; that’ll sort it.

“Careful sir… with the overpowered steering and the rear-wheel drive you can come off a roundabout snaking like an escaped firehose if you’re not delicate. She’ll break the speed limit and you’ll hardly know you’re moving. All this and she’ll do a good 25 to the gallon. Well, 18 maybe, which was brilliant when petrol was 35p a litre. 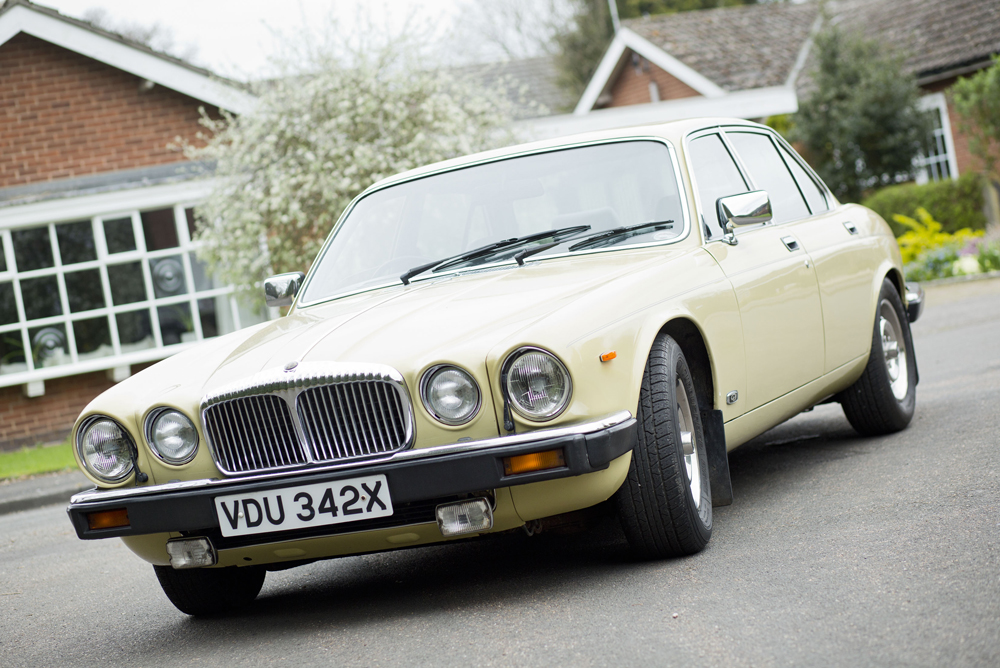 “This motor is so brilliant George Cole himself wanted to buy it, but TV Times magazine got in first and raffled it. The woman who won gave it to her brother. He drove it around awhile then raffled it again for a hospice. George Cole picked the winning ticket but the winner said, “I don’t want it, raffle it again.”.

“So they put it on eBay and this gent Dez Johnson bought it. He’s a bit of an odd one; bass player in a band called These Skies. He’s got a Dalek in his downstairs loo and he’s had more than 100 Jaguars in his life; loves them. But he ran out of storage space and offloaded it at auction.

“It’s an absolute bargain if you ask me; a piece of history, star of the most popular programme on television. You’ll hardly need to put a screwdriver on it, sir. It’ll go on as long as there are reruns of Minder on afternoon telly, and that’ll be forever because they’ll never make anything better.”