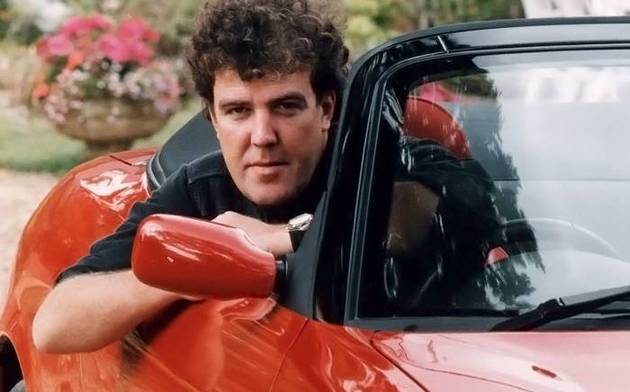 THEY say that if you want to know what cars a motoring writer really rates, you should look at what they have in their garage. So here’s what Clarkson has been driving for pleasure during his time at The Sunday Times.

He paid full price for most — only a few were on long-term loan from manufacturers in the early years.

“Late at night, when all I wanted to do was to get home, it would be sitting there, angry and spoiling for a fight.”

“If you want a relaxing and stylish ride, nothing even gets close to the Jaguar.”

“The nightmare on Elm Strasse, the supercharged fist in an iron glove.”

1995: After working on a freelance basis for two years, Clarkson starts his weekly column

“At full chat, a 355 sounds like God shouting. In terms of grip, handling and poise, the 355 was Torvill and Dean.”

“It comes with enough torque to stop a pacemaker at 500 paces. You can expect it to reach 60mph before you’ve set off”

“It’s built to arm-wrestle the Outback. Why is it the most unreliable piece of junk I’ve had the misfortune to own?”

1999: Clarkson leaves the old version of Top Gear. He begins a second column in the News Review section

“The Land Cruiser blitzes every other car in its class. It was able to swallow me, my wife, her embryo, two kids, the dog and a seesaw.”

“What we’ve got is one of those 11-year-old wonder kids that have just graduated from Cambridge with a degree in quantum physics.”

“With nearly 500bhp on tap you only need think about putting your foot down and you’ll end up in a magistrates’ court.”

2002: The new-look Top Gear is launched, with Clarkson back at the helm

“As a means of carrying people and stuff at the same time, the Volvo has no equal. The packaging is a work of genius.”

“It is fine. It is perfect. It knows it’s a great, great car that was ruined by a useless ape who fitted a crummy aftermarket alarm system.”

“The first car to have been designed by someone who had children, not an engineer who’d read about them in a book.”

“I took the Gallardo backstage at a recent Who gig and it looked right, sitting there among the rock stars and the roadies.”

“The Grosser is fitted with so many ornaments it could almost be twinned with Elton John’s head.”

“It’s a dreadful car to drive, really, but it’s so clever and so well thought out we’re about to buy a third.”

“It is not a joke. Like everything to come out of the Fatherland since it was formed in 1871, it is utterly and deadly serious.”

“This is the automotive equivalent of France, the Sony Bravia, The Sunday Times and Mick Jagger. It is the answer.”