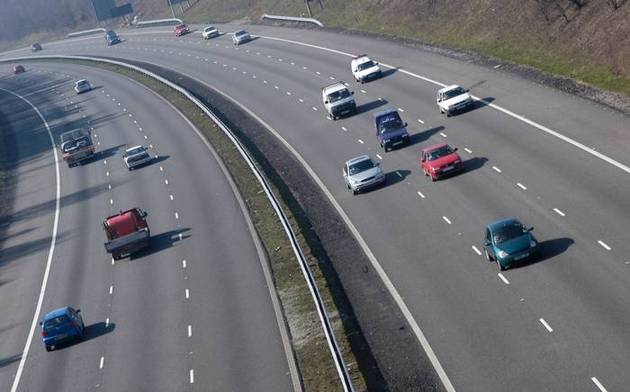 There is a bar in Austin, Texas, where the locals gather on a Thursday to dance the night away, country style. Strangely, even though some of the chaps are the size of a double garage, and their womenfolk are even larger, it is a graceful sight to behold.

And so, during the week, are Britain’s motorways. Stand on a service station footbridge and you are treated to what can only be described as automotive ballet.

Get yourself onto the M40 on a Tuesday and you will see a display of driving that would leave Damon Hill breathless. Sure, he can control a car at 180mph, but unlike the reps in their Mondeos and Vectras he does not have a phone in one hand and a Pork Farms sausage roll in the other.

Formula One chiefs are concerned about the speed differential between the top cars and the ones from teams such as Forti, but guys, guys, guys. Mondeo man is out there every day on the motorway, doing 90, juggling with juggernauts that can barely crack 50. And he does not whinge.

He can’t, because he has no grounds. British truckers are in a class of their own. Think. When was the last time one of these seven-axled giants caused you even so much as a moment of concern on motorways? It never happens.

They get on with their lives, taking lettuces to the shops before brownness sets in, and you get on with yours.

Of course, you are good too. I drove up from London to Oxford last Tuesday and I have never seen such fine driving. These guys were harassed and bored but they made deft, precise and well-signalled moves.

They kept up when it was right, hung back when it was necessary and as a result never gave any cause for concern.

 Swampy digs tunnels to block an extension of the A30 at Fairmile, Exeter. He is later discovered 18ft underground. The site is preserved to this day. Underneath the A30.

 The new Peugeot 406 is a success – thanks to its ‘Search for the Hero’ TV ad campaign.

As with anything, practice makes perfect. The more you drive, the better you’ll get. If you are out there every day, be it in a truck or a Mondeo, clocking up 50,000 or more miles in a year, you will be damned good. You’ll learn to recognise the danger signals. That is a Datsun. He is likely to do the unexpected. That is a T5 doing 50. It must be Plod. It is starting to rain. I’m easing off.

I use Britain’s motorway network a great deal during the week and it is like being part of a huge, perfectly synchronised dance routine. Everything is fluid. Everything is inch-perfect.

Unfortunately, I also use the motorway network on a Sunday and it is an experience that takes me to the outer edges of fear and trepidation. Two miles and my colly is well and truly wobbled.

Last week I found a Vauxhall Nova with a lone woman on board trundling down the outside lane of a dual carriageway at 15mph. What in God’s name was she doing in possession of a driving licence?

Now I don’t believe there are many people left who, for the hell of it, go out for a drive on a Sunday. And even if there are, I doubt they’d chance their arm on a motorway. But there are undoubtedly a great many people who, after they have done The Mail on Sunday, head off to see Auntie Flo via the garden centre. These people probably never drive during the week, and in a whole year probably clock up less than 2,000 miles.

They have never been trained to drive on a motorway and they have had no practice. Allowing them out there is like letting me take the role of first violin the next time the LSO’s in town. I’d be crap and they’d sack me.

These people get into the lane they will want 20 miles early and will do everything in their mealy-mouthed little minds to ensure you and I do likewise. If they can get their wheezing, asthmatic old crocks up to 70, they will sit in the outside lane making sure nobody gets past. It’s against the law, you know.

Suddenly, the professional, talented, regular driver finds his space is full of no-hopers. The trucks may not be out to play on a Sunday but you have an odd, dangerous cocktail.

I have discussed various solutions with all sorts of clever people but there do not seem to be any that are practical. You cannot include motorways in the driving test because the good people of Norfolk and Cornwall would be stuck.

You cannot post look-outs at the top of every slip road to pull over people who look as if they will be a nuisance when they get down there.

And we cannot encourage people in bad cardigans to drive around with a huge sign in their rear windows saying: “I’m really no good at this”. Or can we?