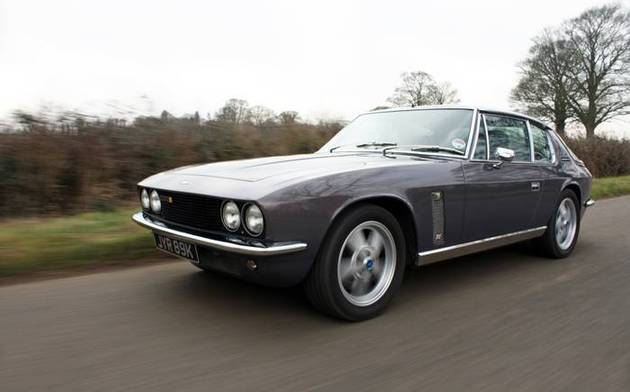 It’s the coolest name ever given to a car. “I’ll pick you up at eight. I’ll be in the Interceptor.” Imagine being able to say that. Or even: “Darling. About tonight. Shall we take the Interceptor?” It sends a shiver down your spine. Maserati is a good name. Thunderbird is even better. But Interceptor? That’s the best of them all.

Of course, it wouldn’t be quite so good if the name were writing cheques the body of the car couldn’t cash. You can’t be called Clint Thrust if you have a chest like a teaspoon and limbs from the canvas of LS Lowry.

Happily, the Interceptor looked magnificent. It was big, with an Italian-styled body that included a thrusting bonnet, a wraparound back window and gills. It was distinguished. It was fantastic. It was one of the best-looking cars ever made.

Sadly, I never drove one, and it’s hard to find out what they were like since the only person I know who had one was Eric Morecambe and he’s no longer with us. From what I can gather, though, the driving experience was “absolutely awful”.

The engine was a Chrysler 6.2 V8, which turned money into noise but produced very little by way of power in the process. Which was probably a good thing, since the enormous live rear axle wasn’t really attached to the car in a way you’d call finished. And to make matters worse, Jensen would simply pop down to the local supplier whenever it needed a steering rack and come back with whatever was on the shelves. Some Jensens, by all accounts, were accidently sold to customers with steering designed for the Triumph Stag.

As a result of all this, the Interceptor sits in the bargain basement bin of the nation’s classic car market. While you are now expected to pay hundreds of thousands for an Aston DB5 or an E-type Jag, a decent Interceptor can be yours for around £5,000.

You may think it would be worth it, just so you could offer to take people out in your Interceptor. But I should imagine you’ll get there two days after you set off, covered in soot. Reliability wasn’t a Jensen strong point, and things won’t have improved with time. So that’s that, then. Memory Lane this morning has turned out to be a dead end.

Except it hasn’t, because the car I am writing about this week is not really a Jensen Interceptor. It started out that way, but then an Oxfordshire company called Jensen International Automotive came along and gave it the full bikini wax and Botox treatment. The car you see is an Interceptor S and it’s absolutely brilliant.

 Portsmouth wheel clampers show they will target anyone — including royal protection officers guarding the Queen on a visit. Clamping on private land was banned a year later.

 The transport secretary says that ‘2011 could be remembered as the year electric cars took off’.

First, the original American engine has been thrown away and replaced with another one. It’s the rather good all-aluminium 6.2-litre V8 from a Corvette. You get a Corvette gearbox as well, but from there backwards, things get a bit more complicated. The live rear axle, the leaf springs and all the rest of the Roman technology is replaced with a fully independent setup, with some bits coming from the old Jaguar XJS — the limited-slip diff, for example — and some from the new company.

The front AP Racing brakes have six-pot callipers with ventilated and grooved discs. The tyres are low profile. The dampers are adjustable. And … are you dribbling yet?

I was. So I climbed inside and it all got better and better. It’s a faithful reproduction of the Jensen original, with white-on-black Smiths-style dials, quilted seats and, best of all, a push-button radio that offers you the choice of BBC 5 Live with a slight crackle. Or just the crackle. There is, however, a discreet iPod connection in the glovebox. 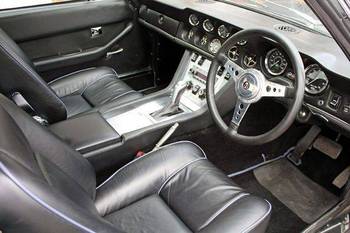 It’s extraordinary when you sit in a car from this period how light and airy the interior feels. Because the pillars are there simply to support the roof, rather than to absorb the impact of hitting a bridge, they are thin and spidery. It feels as if you are sitting in a glass bubble, and that makes you feel like you’re on show. Which, if you are driving an Interceptor, is exactly where you want to be.

Be warned, though. So much of you is visible as you drive along that you need to think about what you’re wearing. I suggest a g-suit of some kind. Or, if you don’t have one, a black polo neck and some Jason King-style sunglasses.

I genuinely felt, as I set off for the first time, that this could be the perfect car. Olde worlde style with modern dynamics. A Georgian house with central heating.

Sadly, it was not to be. The problem is that if the new company changed every single feature, the end result would be classified as a new car. And would need to face all the modern safety and emissions tests. So some of the period features remain. The wipers, for instance, which move back and forth nicely. But remove not a single drop of moisture.

Then there’s the wind noise. The fact is that, back in the Seventies, cars had rain gutters and “That’ll do” was the guiding principle of all West Midlands panel beaters. So at 70mph on the motorway, even in the new car, it sounds as if you’re wing-walking.

The biggest problem, though, is the steering. They’ve been forced to keep the original rack, and no matter how many adjustments you make to the geometry, you’re not going to get round the fact that it was designed by a man who wanted most of all to go on strike. As a result, it’s heavy, there’s little self-centring and it’s so low-geared you need a lot of arm-twirling just to move three degrees off the straight ahead.

Right. That’s the bad stuff out of the way. Now let’s get on to the good bits. Starting with the heater. Oh, the joy of being able to have warm feet and a cool face. Climate control is all very well but give me the simple Jensen setup any day.

And then there’s the sheer speed of the thing. Put your foot down and, with a lot of angry lion noises, the bonnet rears up and in 4.5 seconds you’re doing 60mph. This comes as a big surprise to the following Audi driver, who’s desperately dealing with life in your jet wash, while not quite believing his eyes. Flat out, you could be doing 155mph — or more. That’s 155 in a car made in 1975.

It gets better, because although the steering feels a bit Victorian, there’s plenty of bite in the bends and none of the understeer I was expecting. It’s not a sports car. But it gets close.

On top of all this, there’s the ride. We have become used in modern cars to the fat, low-profile tyres loved by stylists transmitting every single ripple and ridge directly to our bottoms. But in the Jensen it’s like floating. It’s as comfortable as a modern-day Bentley. 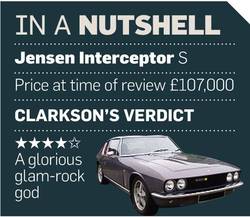 But it costs less. Despite the sheer amount of work that’s gone into this car, it will cost you — including the donor vehicle — from just £107,000.

So, to conclude. What we have here is one of the most beautiful cars ever made, stripped down to the bare metal, repainted, retrimmed and fitted with just enough mechanical components to make it handle properly, ride even better and go like a nutter. That’s a properly good idea.

Best of all, though, for the first time you can say: “I’ll pick you up at eight. I’ll be in the Interceptor.” And you’ll actually be there on time.