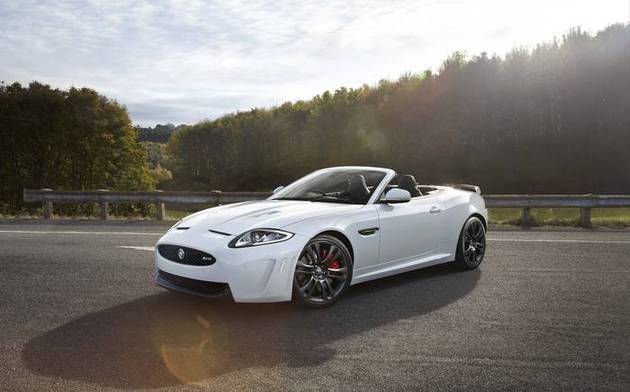 A man was apprehended by the constabulary recently for turning around to admire a girl on the pavement. He’d seen her bottom as he drove by, and officers spotted him looking through his rear window to see if the front was as good as the back.

I realise, of course, that when we are behind the wheel we are expected to become robots, immune to the ringing of a telephone, the crying of children in the back and the stupidity of other motorists. We may not talk, listen to the radio, eat a sandwich or become irritated. And all of this is ridiculous. But now we discover we may not drive while under the influence of a scrotum, and that’s worse.

I try not to look at pretty girls on bicycles because it is probably annoying to have half the population looking up your skirt and praying for a gust of wind. But it is not possible. I have just about trained my head to stay still but my eyes are controlled by testosterone, and as often as not I don’t see the lights turn green because they’ve swung around so far, I’m actually looking at my own frontal lobes. 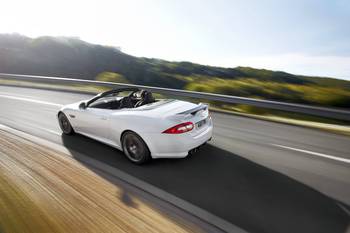 I’m also distracted by roadside advertisements, new shops, the amusing driving position of shorter motorists, interesting cloud formations, work matters, idiotic signs that have no meaning, a constant fear that one of the wheels is about to fall off, the mind-numbing noise of high-power motorcycles — pretty much everything. Except other cars.

I don’t turn around when I see a Lamborghini or a Ferrari going the other way, in the same way as people who work at the chocolate factory don’t stand and salivate at the petrol station’s confectionery counter.

That said, I can never resist a sneaky double take when I am presented with a Jaguar XK. Designed by the man who gave us the Aston Martin DB9, and engineered by Jag when it and Aston were part of the same company, it’s always been a thinking man’s Bondmobile. No, really. It was nearly as quick off the mark and half the price.

What’s more, it managed to combine the rakish good looks of the Aston with more aggression. It managed therefore to be pretty and fighty at the same time. It’s such a head-turner, in fact, that whenever I see one I become consumed by one of life’s great mysteries: “Why don’t I have one?”

 A 1962 Ferrari 250 GTO is in the world’s most expensive car crash when it hits another car during a low-speed road rally. Worth more than £25m, the Ferrari is severely damaged.

 Ben Westwood is jailed for nine years for speeding in a stolen Audi RS5 at 180mph — a British record.

To find out, again, I’ve just spent a week with the newest, latest version, the super-hot, super-aggressive XKR-S convertible. And straight away I could see many problems.

There’s no getting away from the fact that this is an old car now. The dials look as though they’ve been lifted from a 30-year-old Peugeot, the back seats are as useful as having no seats at all, the touchscreen command system, which operates the radio and climate control, is as counterintuitive as an old twist-key sardine tin and while an iPod connection is supplied, it won’t play tunes from your iPhone — or, at least, it wouldn’t for me. “What!!!?” it says, when you try. “Are you suggesting you can play music on your telephone? Don’t be stupid.”

There’s more. To distinguish this new hot model from its lesser brethren, Jaguar’s stylists have seen fit to spoil the very thing that gives this car such appeal. Its looks. Up front, there’s a new nose that suggests the car is frowning. Then you have two suitcase handles on the corners — I have no idea why — and at the back a large spoiler, which is fine if you are 18 and a yob. But not if you are 48 and a solicitor.

What Jaguar has done is taken, say, Keira Knightley and “improved” her looks with several nose piercings and, on her forehead, a dirty great tattoo.

And now we get to the 5-litre supercharged V8 engine. It, like the car, is old, but that hasn’t stopped the engineers squeezing about 40 more brake horsepower out of it. Inside, it must look like a lemon that’s been run over by a bus.

So. There we are. The looks are gone. The interior is old and the engine’s a pensioner with a new pair of training shoes. And yet … 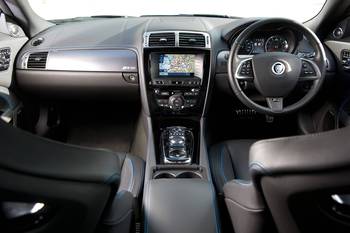 In two important areas the car’s age pays dividends. First, it still uses a proper automatic gearbox, not an eco-sop flappy-paddle manual. And its roof is still made from canvas rather than steel. Normally, I’m not given to camping, but somehow, in a car, it’s nice to be protected from the elements by nothing more substantial than one of Bear Grylls’s hats.

Not that I needed the roof up much because at the precise moment this car was delivered, the rain stopped, the sky turned blue and the temperature shot up to what felt like a million. You’re going to like driving any convertible in conditions like this, and I must say, I liked driving this one a lot.

Foremost, there’s the speed. It’s properly fast. And for once in an XKR, the exhaust thunder is audible not just to passers-by but to occupants of the car as well. I particularly enjoyed the distant gunfire rumble it makes on the overrun. I was on the overrun a lot. In fact, I spent most of the week speeding up, just so I could slow down again.

I also liked the steering. It’s not a light car, especially, but it feels nimble and agile. The only thing you have to remember is that the chassis was set up by a man who likes to go sideways all the time, so you have to be a bit careful before engaging the full enchilada.

Not to worry. Unlike other XKRs I’ve driven in recent times, this one doesn’t bang and crash over potholes. It’s actually quite smooth. You can therefore cruise about the place, no problem at all.

Soon, though, you start to encounter some issues again. When, for instance, you use the paddles to override the auto box, there’s no easy way of getting it back into “Drive” . Also, the seats aren’t very comfortable. And I’m afraid that when you arrive at a friend’s house, they will see the blingarama styling add-ons and will not be impressed.

At this point I must get to the price. It’s £103,430. And it doesn’t matter if you squint or stand on your head or say it really fast — that is a lot of cash. Half-price Aston DB9? Not any more.

It’s easy to see what the people at Jaguar have done here. They are busy developing the new, small sports car that many are billing as the next E-type. And over at Land Rover, finishing touches are being put to the new Range Rover. There simply isn’t the money, or the manpower, to come up with a new XK, so to keep it alive they’ve sprinkled a bit of mustard powder on the old girl in the hope they can sell a few in Qatar. 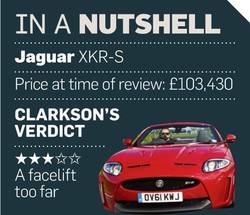 Jaguar might pull that off. But here? No. It’s a lovely car to drive and it’s very fast. But it’s too expensive and too embarrassing when you get where you’re going.

Buy a Mercedes SL instead. Or, if you’ve been swept up in that “Aren’t we marvellous?” euphoria from the Olympics and you really want an XK, look in the second-hand columns of this paper and buy one from a period when it was new.