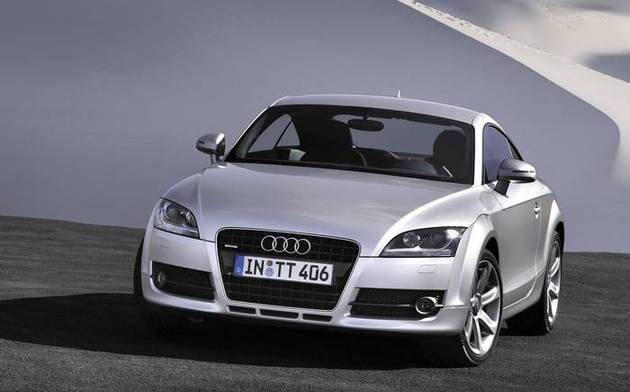 The road that connects Oxford to my house in Chipping Norton is called the A44 and it’s really lovely. There are long straights to build up some speed, there are tight, well-cambered corners and there are long, sweeping bends through which you can feel the car playing “dare” with the laws of physics.

I should imagine that even in something like a Golf GTI you could cover the 15 miles without too much bother at an average speed of 100mph.

But, of course, the local highway bureaucrats have decided that the speed limit should be half that. Just 50mph. They even send a civil servant in a van to a special perch every so often so he can photograph the disobedient.

This is extremely dangerous. Because it means that some people do indeed drive at 50mph. And that means those who can’t see any reason for the 50mph limit have to get past. And this means that at any given moment in the day or night, more than half the traffic on the A44 is actually driving on the wrong side of the road.

Time and time again I come round a blind bend to find someone with wide eyes and a goldfish mouth heading straight towards me as they try desperately to get past someone in a 50mph Hyundai.

So far I have been lucky, but one day I shall have a head-on accident and I shall be killed. And everyone will blame the idiot who flouted the law, even though it was the law itself that caused the accident.

If I were in power I’d put a minimum speed limit of 60mph on that road. And arm the civil servant in his van with a rifle so he could shoot anyone who was failing to comply.

Now at this point you’re probably expecting me to launch into yet another polemic on why speed doesn’t kill (see Richard Hammond for details) and how it in fact makes you cleverer. But no. Instead of explaining why people go fast, I want to take a look this morning at why some people don’t.

I don’t mind if you stick to the speed limit. That’s fair enough. You have probably given your wife nine points and she’s refused to take any more.

Obviously some of them are in tractors, and that’s fair enough. We need the oilseed rape and the linseed that farmers grow to fuel our cars and feed our cows, so they will be exempt from my slowcoach cull. No. I’m talking about people who wilfully and deliberately drive slowly when there really is no need to be doing so.

 Richmond council trebles parking charges for ‘gas guzzlers’ to encourage owners to buy greener cars. It is soon scrapped: drivers would rather  pay than give up their SUV.

These people always have a half-mile tailback of exasperation in their wake, and since their cars have mirrors they must surely know this. So what are they thinking as they trundle along at 32mph?

If they cared for the safety, wellbeing and happiness of other road users, they would pull over from time to time and let everyone pass. But they don’t. They never do. They know they are holding the world up. And they simply do not care.

So what kind of people are they?

Well, obviously they have such dull and empty lives that they don’t mind wasting time by driving everywhere at half speed. They’re bored at home so they may as well get in the car and set off.

And they don’t much fancy where they’re going, either, so they feel they may as well dawdle so that they can get there as late as possible. For these people, being in a Vauxhall Corsa at 26mph is the most interesting thing they will do all day.

Show me someone who drives slowly and I’ll show you a catastrophic bore. Someone whose life is empty, shallow and pointless. But there’s more to it than that.

They are also deeply unpleasant. Like bellringers, they wish to impose their beliefs and their way of life on everyone else. They are people with an antisocial personality disorder, manifested in amoral behaviour without empathy or remorse.

And that’s the dictionary definition of a psychopath.

This, then, is a useful tip for the police. The next time someone goes on a random shooting spree, hosing down innocent men, women and children and then making good his escape, please do not look for someone driving away at high speed in a flash car. Look instead for someone in a chocolate-brown Nissan Micra doing 28mph.

You don’t believe me? Well, think about it: how many racing drivers have been done for murder? None.

And now try to picture Saddam Hussein doing 200mph in a Koenigsegg. You can’t, can you? Or Michael Ryan, or Robert Mugabe. And then consider Hitler, whose automotive legacy was the VW Beetle — absolutely the slowest car in the world.

Remember the M25 murderer Kenneth Noye? Remember what car he stepped from before he stabbed that kid to death? Was it an M5 BMW? Nope. It was a diesel-powered Land Rover Discovery, and this proves my point. Slow drivers — they’re all exceedingly dull and they’re all murderers.

Which brings me, quite naturally, to the new Audi TT. I reviewed the 2-litre front-wheel-drive version a few months ago and I liked it very much. So you’d expect me to rave about the much faster four-wheel-drive V6 I’ve been using this past week.

Hmmm, well … the base car develops a murderous 197bhp, whereas the V6 delivers a creamy and interesting 247bhp. But you’d be surprised at how similar the two feel in terms of outright get-up-and-go.

Yes, the V6 gets from rest to 62mph in 5.9 seconds, but the base car is there just half a second later. And it’s a similar story at the top end, where the V6 can do 155mph — just 6mph more than the front-driver.

And it’s the same story with handling. Of course the V6 has four-wheel drive, which affords you a lot more grip, but curiously the front-driver is more rewarding and actually better to drive. It certainly is if you spec it up with the optional electromagnetic suspension, without which the V6 felt — dare I say it — a little crude and jiggly.

And then we get to the gearbox. It was a standard six-speeder and it was the first gearbox I’d come across since the mid-1980s that just wouldn’t behave itself. To get first gear you had to go into second gear first and then shove it forwards hard.

Failure to do this resulted in no gear at all, or — on two occasions, much to the consternation of the chap behind me — reverse.

Of course, you can get round this by specifying the DSG system — the only flappy-paddle gearbox in the world that works — but go for this and electric suspension and that £29,000 bill is going to climb alarmingly. What’s more, compared with the Alfa Romeo Brera I reviewed a couple of weeks back, the TT is fairly impractical. Yes, you can get a child in the back of the Audi, but if you slam the tailgate after he’s in there you’ll fracture the poor thing’s skull. And there’s more. Because if a child is small enough to fit in, he’ll have to have an EU booster seat, and that won’t fit in. 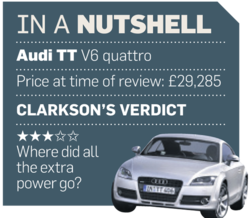 It sounds as if I’m having a downer on this car, and that’s probably unfair. It looks fantastic and I think you’d be proud to own such a thing. The engine is good, too, and the quality of fit and finish is wonderful.

The thing is, though, that the Brera with a V6 and four-wheel drive is even more desirable and even more beautiful to behold. And if your heart is set on an Audi, the normal 2-litre version offers just as much for £5,000 less.

Weirdly, then, I’m recommending the slower version. But if you find yourself on the A44, please don’t use this as an excuse to actually drive it slowly.