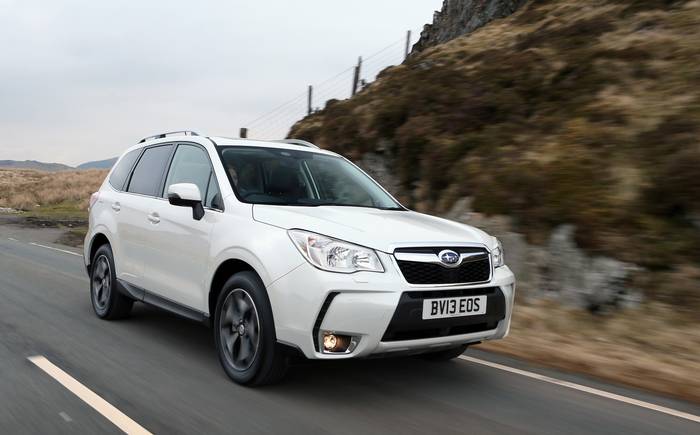 When I was growing up, in the days before either health or safety had been invented, commercial breaks on the television were often filled with important public information films. They were designed to open our eyes to all of life’s hidden perils, and some of them were jolly frightening.

In one we were told not to put a rug on a recently polished floor. In another we were warned about the dangers of fishing while under electricity cables. And in my favourite we saw a pretty young woman in a short skirt running down the pavement. Sadly she wasn’t really concentrating and as she rounded the corner she crashed head first into a large pane of glass being carried by two workmen. “Don’t run,” said the voiceover sternly. It’s a piece of advice I’ve followed ever since.

Search for and buy a Subaru Forester on driving.co.uk

Unfortunately far fewer of these films are made today, partly because some of the television presenters who fronted them are currently troubling the Operation Yewtree investigation. But mostly because after you’ve spent the day in a high-visibility jacket and a hard hat, filling in risk assessment forms, the last thing you need is for your evening’s viewing pleasure to be interrupted with yet more reminders to stay safe.

However, while we are no longer told to learn to swim and wear a seatbelt and think once and then twice about motorcycles, there remains one safety drum the government is still banging: we are still being told not to drive when we are tired.

Is this really the most important safety message it can come up with? What about driving when you are under the influence of marijuana or Vera Lynn? What about a message telling us not to swerve for badgers? Or cats? Or how about a simple film that explains to those recently arrived from eastern Europe about how a roundabout works?

Or maybe it’s just me because I’m only ever tired about two hours after I get into bed and turn out the lights. During the day, sleep for me is impossible. (Except after the first corner in a grand prix. Then I can nod off no problem at all.)

However, last Friday night I set off up the M1. It was dark and the middle of rush hour but, unusually, traffic was flowing quite well. In the outside lane everyone was doing 60mph, Simon Mayo was on the radio with his “all request” Friday and I was going to have dinner with my boy.

It was all very warm and safe and pleasant and the engine was moaning out its one long song and I started to feel the same sensation I get after a lovely Sunday lunch and Sebastian Vettel has just taken the lead in the second corner. My eyelids became heavy. My head began to nod. And way off in the distance I noticed the brake lights were coming on . . .

Ordinarily this would cause me to slow a little and to cover the brake pedal. But I simply couldn’t be bothered. It would have meant moving my leg and I was just too warm and cosy for that. Much easier, I reckoned, to plough into the back of the car in front.

Naturally the traffic wasn’t actually stopping. It was just a moron in a Peugeot braking for no reason and causing everyone behind to brake as well. So I didn’t have the accident. But I did for the first time pull over at the next services for a little walk in the fresh air and a cup of coffee. Weirdly I didn’t need a government film to tell me to do this. It was just common sense.

Once I was back on the road, with some matches in my eyes and a drawing pin on the seat — that works well, by the way — I began to wonder what on earth had brought about this drowsiness. Yes, I have just finished a relentless spell of travelling and, yes, there have been a few late nights. But that’s nothing new. Which led me to the conclusion that I was being sent to sleep by the car I was driving — a Subaru Forester XT.

I’ve never felt drowsy in a Subaru before. This is because the cars are built for slightly over-the-limit rural types who wear extremely heavy shoes from Countrywide and have little interest in comfort.

This applies to all the models  it has sold here. You had the original pick-up truck. Sold through agricultural suppliers and farm shops, it had a corrugated iron cover over the back, some sheep in the passenger seat and at the wheel a slightly over-the-limit driver with heavy shoes who’d never been to London.

Then you had the much talked about and greatly missed Impreza. Available in many stages of tune over the years, it came with a bonnet scoop the size of the Sydney Opera House and a turbocharger that was even larger than the driver’s shoes. Imprezas made their mark in international rallying, a sport that’s very popular with rural types who went to school with the local bobby and have no need to worry about the breathalyser kit in the back of his panda car.

And then there was the no-nonsense, go-anywhere Forester. It had no styling at all but it was extremely well made, a feature much prized in the shires.

In recent years, though, Subaru has been having a tough time. Sales in Britain have plummeted, and many have said this is because the strong Japanese yen made the cars expensive. That is rubbish. Sales were falling because of Tony Blair’s crusade to make the countryside illegal.

So now it seems Subaru is fighting back by going all skinny latte and arugula metrosexual. The new Forester has been styled and the bonnet scoop has gone and it’s big and well equipped and pricy. Which means that it’s just another stupid sports utility crossover vehicle to make people in Surrey feel as if they live in the countryside.

Happily, unlike many other vehicles of this type, it does at least have some off-road credentials. A device that stops it running away on steep slopes, for example. And a boxer engine that a) makes a nice noise and b) gives you a lower centre of gravity. But sadly the gearbox is now what Subaru calls Lineartronic.

In essence it’s a continuously variable transmission affair, and CVT gearboxes don’t work, even if they are fitted with eight artificial steps. A CVT gearbox detaches you from the sensation of driving, or being in control. Couple this to the electric power steering and a strangely mushy-feeling brake pedal and the sense of isolation is complete. As I discovered, you don’t feel as if you’re driving this car. It’s just somewhere warm to sit as the world drones by.

Yes, it is comfortable and quiet and it does still appear to be well made, but there are now too many frills, none of which will be of the slightest interest to country types. I mean, an electric tailgate? Do me a favour.

I used to like the rugged, no-nonsense, rural nature of Subarus. But this one? I dunno. It feels as if Barbour has tried to make a dinner jacket. And failed.

Search for and buy a Subaru Forester on driving.co.uk