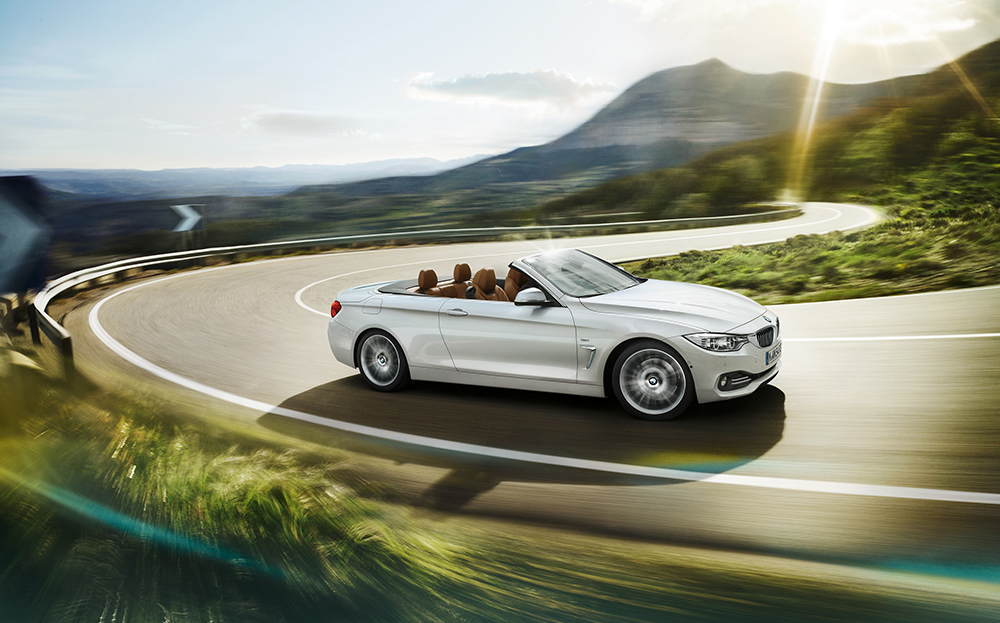 What is the BMW 4-series convertible?

This is the top-down version of the stunning BMW 4-series; a new model name for what used to be the 3-series coupé.

It’s even more glamorous than the 4-series coupé, by taking that car’s flowing, muscular lines and adding a hard-top roof which folds down flush with the bodywork. The roof retracts with a push of a button, taking 20 seconds to perform an intricate movement where it splits into three and disappears into the boot. This doesn’t leave much space for luggage; just 220 litres.

It also adds weight to the already heavy car, which needs to be stronger than the coupé version to compensate for the loss of rigidity when the roof is lowered.

The BMW 4-series has not yet been crash tested by Euro NCAP but is likely to perform to a similar level as the 3-series, which has been awarded the top 5-star rating.

The BMW 4-series convertible has been tuned to soothe. The ride is firm but smooth, the gearchange from the eight-speed automatic is slick and engine noise subdued. With the roof down, there is little noise. Whether you’re travelling across a crowded city, dawdling along the coast, or crossing countries on motorways, you could happily spend hours cruising along in the leather-lined interior without any discomfort. 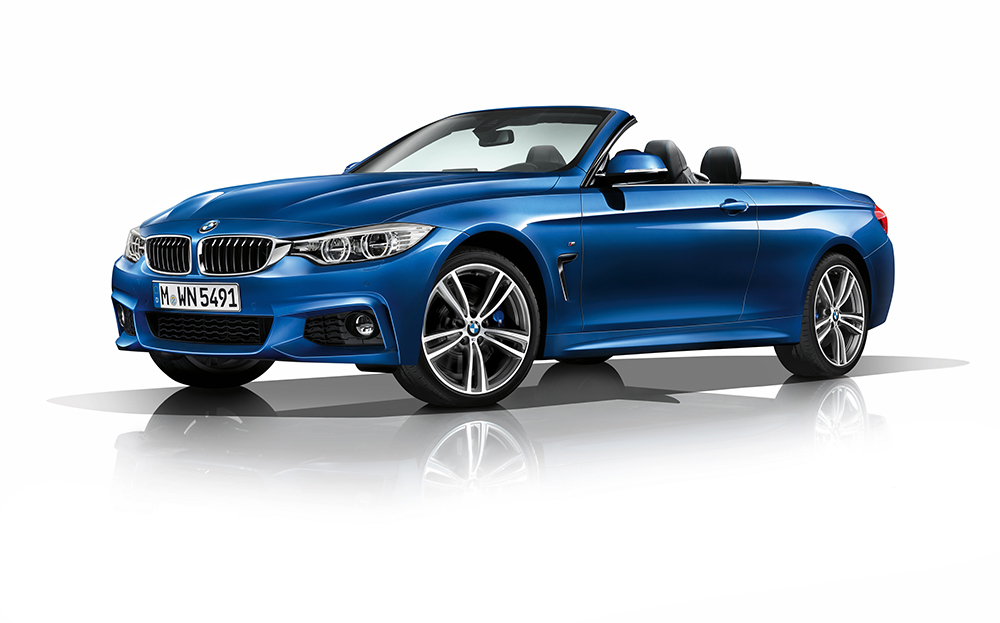 This is, however, one BMW that can’t claim to be the ultimate driving machine, despite the low driving position. The added weight appears to have had a significant effect on the car’s handling. Turn the wheel and you feel none of the sharpness and agility present in the coupé. By BMW standards, it feels slow to react and heavy – a bit of a pudding. In fairness, it’s a problem that afflicts most convertibles that a re based on coupés, like the 4-seriesbut it’s still disappointing from a company that has built its reputation on handling excellence.

At least you’re unlikely to be disappointed by what’s under the bonnet. Even the lowest-spec diesel-powered 420d offers a good level of performance. The petrol-powered 428i offers more power at a similar price, although you will pay at the pump: fuel economy is 15mpg worse.

At the higher end of the spectrum, the power is spectacular. BMW’s six cylinder diesel has a large amount of torque (up to 465lb ft) at low revs, which delivers sledgehammer-type performance for what seems like a reasonable £4,000 premium over the 420d. It’s fitted to the 430d and more powerful 435d, which is the only one available with four-wheel drive and which accelerates from 0-62mph in 5.2sec. Fuel economy is an impressive 50mpg, according to official figures.

The six-cylinder petrol engine in the 435i won’t record anything like that. You’ll be lucky to get 30mpg in real-world driving. However, the power from the 3-litre turbocharged engine is vast and delivered smoothly. It’s motoring decadence.

The eight-speed automatic transmission can be operated manually with paddles behind the steering wheel. The few who opt for the manual will be rewarded with quick and precise changes. 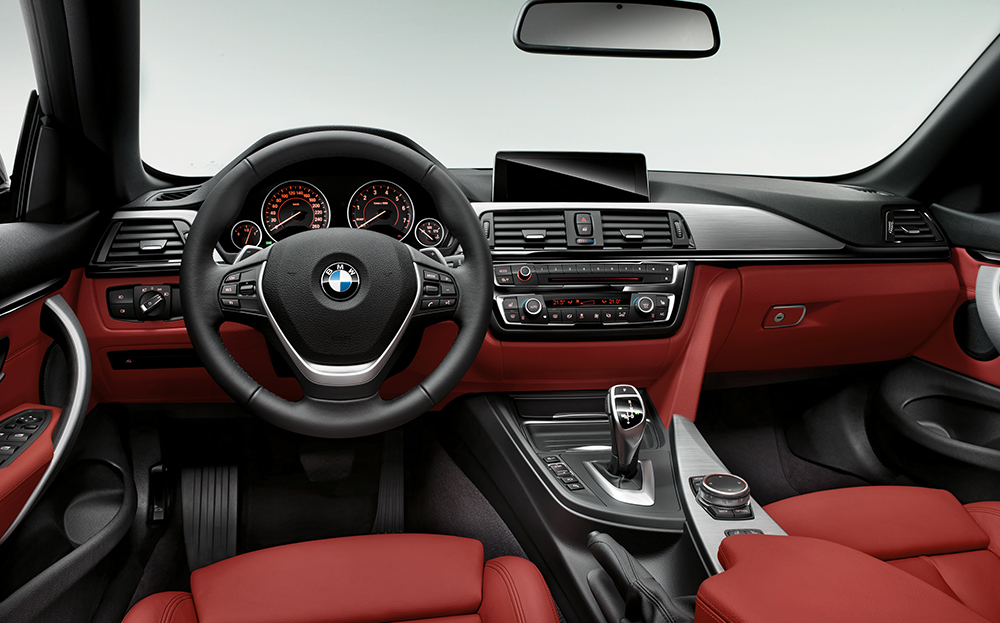 The interior is luxurious, stylish and modern with clear controls and the excellent iDrive dashboard menu system, which works intuitively. As you move up to the more expensive systems (which can cost £2,000), you’ll get the latest input options, including voice control that makes few mistakes and a touchpad on the control dial, which enables you to trace letters and numbers, when entering a postcode, for example.

On the whole, the materials are of a high quality and among the options are advanced driver-assistance technologies, including adaptive cruise control (around £600), which will maintain a set distance between the car in front and automatically stop and go in traffic jams. It also has BMW’s excellent adaptive lights (well worth £360), which can adjust the main beam to avoid dazzling drivers, and a head-up display (£825).

The £265 optional wind deflector is essential if you want to drive at speeds much higher than 40mph. Without it, the cabin is blasted with passing air, even with the windows up, and conversation is all but impossible. The deflector is a vertical meshed screen that can be set up behind the front seats, creating a bubble of air in the cabin between the deflector, windscreen and raised side windows. It cuts out wind noise, allowing the driver and passenger to talk, and also means that you can drive with the roof down in winter, as long as the ventilation is on maximum heat. However it fits over the two rear seats, so your four seat convertible suddenly becomes a two-seater, unless you put the roof up, in which case you might as well buy the cheaper coupé.

It’s a vulnerable position for BMW to put the car in. With only two fully usable seats, the 4-series convertible is in competition with sharper-handling, purpose designed roadsters including the Porsche Boxster or smaller convertibles such as the pretty Audi A3, which uses the same wind deflector system but is more than £10,000 cheaper. Alternatively, you could buy a Mercedes E-class cabriolet which has a wind deflector on top of the windscreen that channels air over occupants’ heads ‒ all four of them.

But then, no one ever really bought a convertible with their head. We can only give it three stars, but the thought of roof-top motoring in this stunning car, twinned with one of the wonderful six-cylinder engines, might be enough to carry the heart of buyers. And that’s understandable.